You Don’t Really Know Who I Am. Fighting The Stigma Of Depression

He works hard. Occasionally, plays hard. Loves to fish. He’s on the quiet side, well-liked by his friends. He has had several relationships, but not yet found “the one.” He’s very curious about learning, although he didn’t make straight A’s in school. He had to study. But when he gets something, he really gets it.

Now, his boss counts on him to get the job done, and done right.

He lost his best friend several years ago, who was hit by a drunk driver. That’s how I first met him. He was trying to cope with the death of his buddy, and needed help.

He got through that, although it was tough.

Depression runs in his family. An uncle committed suicide. His family was traumatized by the near death of his sister, years ago. Everything changed in the family after that, very subtly. But it was never the same. His folks turned their attention to her, and were often critical of his efforts to please.

He downplays all this, questioning whether it’s all that important to mention.

Mark has an ongoing struggle with depression. But you would never have known it. Then he took a risk, and came into therapy.

He’s beginning to recognize depression for what it is, and when it’s affecting his reasoning. He’s catching himself, as he realizes the negative messages he has absorbed. He’s connecting the dots between how he responds to authority, competition, women — and his early childhood experiences. He’s even beginning to open up about it, meeting a guy friend for coffee before work.

“We met around 6:30 at the Stop And Go. We talked about how both of us can get really depressed.”

I was floored. Happily. But floored.

Two guys. Meeting for an early cup of java. Talking about depression.

These men don’t look depressed to anyone. They’re out there, working their jobs. Getting things accomplished. But they are still searching for the reason why they drink too much, or rarely feel content.

Andrew Solomon, who writes eloquently about depression explains,  “The opposite of depression is not happiness, but vitality.”

Solomon is describing classic depression. This is when the smallest of tasks becomes intolerably and irrationally difficult to accomplish.

But there is a kind of depression that’s different. People who are out there functioning in life, often extremely well. Like Mark. No one, not even him, sees him as depressed.

Perfectly Hidden Depression is what I call it.

Sometimes, even, that death will be welcome.

He keeps secret the abuse that he suffered, or other traumas or loss he experienced. He knows it happened, but the impact of it isn’t recognized. The feelings are rigidly stored away in an almost inaccessible place in his mind, left to gather dust and be discounted.

So he hides. He hides behind a job well done or a family that looks perfect. He hides from the stigma that still exists. He exerts tremendous amounts of energy to look great to everyone who knows him, to be outwardly the epitome of success.

Kevin Breel talks about it eloquently in this Ted Talk.

This is not only a male problem. Plenty of women do the same thing.

People with classic depression are overwhelmed by the loss or difficulty of their lives. They can’t function, and are lost. 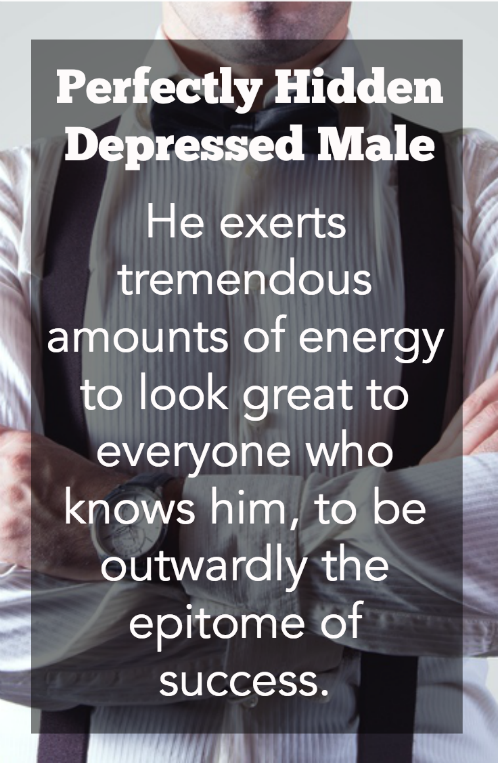 People with Perfectly Hidden Depression are overwhelmed by the idea that anyone might find out that they aren’t all that they seem — that the back story of their lives might be discovered. They function far too well. They actively deny the importance of any pain. And carry on.

Therapy is different with these two problems. With classic depression, the goal is to help someone reconnect with their external world — to reengage with their families, their friends, and their purpose, to stop the withdrawal and the implosion of their very being, and to ease the misery of thinking that can be filled with self-loathing and hopelessness.

With Perfectly Hidden Depression, the goal is to help someone engage with their inner self — to acknowledge and work through their denial of pain — to aid in a reconnection with how their early experiences affected them, and to reassign their worth, not to what they accomplish, but to their own value. To help them find a way to accept that whatever pain they have doesn’t have to be hidden, but can be explored.

Admitting pain doesn’t make you less of a human being. It makes you human.

If this is you, please risk getting help. Or admitting it to yourself.

It’s worth it. You are worth it.