“You Are Where??”: Accepting the Difference Between Truth and Perspective in Relationships 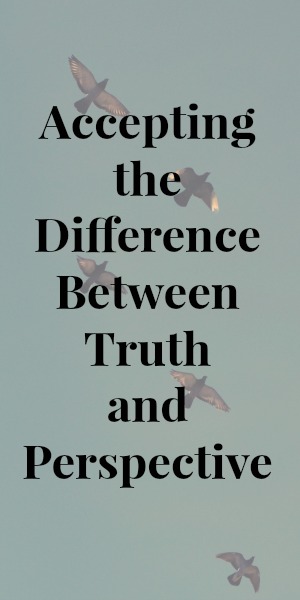 “Mom, remember when you told me that if I ever parachuted out of an airplane, you didn’t want to know about it until after it was over?”

That was last year.  My own son, doing the “I’d rather say I’m sorry later” thing.  And using my own words against me!

I didn’t have a leg to stand on.  I myself had slipped off and gone to Mardi Gras my freshman year in college.  My protective parents called while I was there.  My poor roommate managed to somehow get in touch with me.  I called them back.

“We were calling to let you know there are tornados in Tennessee and Arkansas.  We want you to promise you won’t do any driving.  They are all over everywhere“.

I swallowed hard.  “I promise”.  And I didn’t do any driving on the way back to Memphis from New Orleans.  Just passenger-ing.

I felt so guilty when I got back – I ‘fessed up.

At least mine was being more honest with me.  Sort of.

There were all kinds of justifications of why he was at Mardi Gras.  I remembered my own.  Smiled over the phone, as I was trying to keep myself from shaking my head.  My parents’ wishes were coming true.

“We hope that you have a child someday- like you.”

Why do parents say that?

My son and I made a pact.  He would not use that particular logic in his thinking anymore when it came to sharing things with me.  I was unhappy, but I would not over-react.  Or worry.  To my knowledge, we both have kept our promises.

Trust.  So extremely valuable.  So fragile at times.  When it’s gone, it’s awful.

We have been hearing this week about the case of Rachel Canning who is suing her parents to get them to pay for her education.  New Jersey seems to one of the states whose courts have set a precedent for such a suit.  Each is blaming the other for bad behavior and poor character.

Something happened a long time ago with this family.  Who knows what.  There is obviously no trust.  Each is telling the world that the other is manipulative and lying.

I don’t know if irreparable damage is being done.  I have seen people work out some pretty difficult things.  Others painfully retreat into estrangement.

A major obstacle is typically trying to prove who is wrong and who is right.  Those fights can be vicious and unforgiving. You will frequently hear me respond to marital fighting in my office, “If you are going to keep on fighting about who’s right and who’s wrong, you may as well just get divorced.  Or decide you will have a miserable marriage.  If you ‘lose’ that battle, you are resentful.  And all you want to do is fight harder or meaner to win the next one!”

Accepting that our perspective, our truth, is just that.  Perspective.  Everybody has one.  It’s what they base their beliefs on, what guides their actions.  Some are more rational than others.  Some more based on emotional or intuitive information.  When differences are worked out well – when trust is part of the relationship or perhaps being regained – it’s because perspectives of all involved are taken into consideration.  Respected.  Maybe not agreed with – but respected. 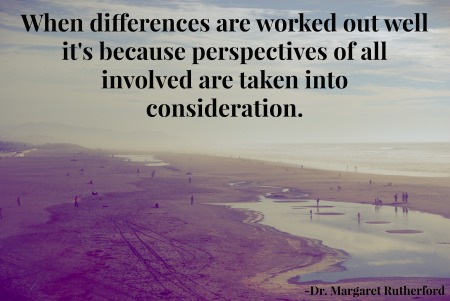 Maybe there is hope for the Canning family.

Mardi Gras happened again this year.  My son was there.

Told me all about his plans, bless him.