When A Parent Needs Too Much: What Is Enmeshment and How Does It Hurt A Child 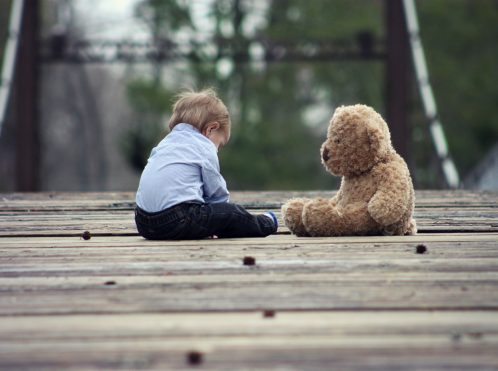 Being a parent is a complicated job.

Healthy parenting includes doing your best to create a loving environment, supporting your kids so that their talents and interests thrive, and guiding them as they increasingly build their own life.

All parents are going to make mistakes that impact their children. It’s one of the terrifying realizations you make very early on. They’ll benefit from your strengths, but… your vulnerabilities will also affect them. Right before my son was born, I suddenly realized that I knew I was being a good enough mom while I was pregnant. Not too much fast food (although I was amazed he didn’t come out looking like a chicken nugget…) and plenty of rest. But things got a lot fuzzier when he was a babe in arms.

There are lots of mistakes to make. This parenting gig is humbling.

Yet some problems are harder to see than others. What is one of them? When you need too much from that child — when the two of you are enmeshed.

In one kind of unhealthy parent-child dynamic, the problems may be harder to see. These parents and their kids are “enmeshed.” And it means just what it sounds like — the boundaries between parent and child don’t exist clearly, if at all. They’re all tangled up with one another.

A mother shares too much; a dad is needy. Children get the message that it’s not okay to be independent — they need to be their parent’s confidante or buddy. It would never occur to that child, even as an adult, not to include their parent in daily decisions. Multiple texts go on all day long. When a new boyfriend casually says, “Hey why don’t you come back from holiday break a day early so we can hang out?” there’s shock and almost ridicule. “I can’t go back early. I always spend this time with my mom.”

What’s tricky about this? It can appear from the outside that all is well — that this is what family closeness looks like. But on the inside, the parent expects loyalty and doesn’t celebrate their child’s independence, unless it’s to live through that child’s achievement or interests. And the now adult child? They can be stricken by guilt for simply wanting and needing their own life.

The new book Educated by Dr. Tara Westover describes an extreme example of such a family where the parents didn’t believe in public schools, doctors, vaccines, or socializing with others, but kept their children (at least when they were all quite young) working on the farm, away from books or others. There was an intense disdain and ridicule for wanting anything else in life but other than was offered at home. The author challenged these rules, but not without paying a heavy price.

Entire families can be enmeshed.  If everyone in your family knows everyone else’s business and always feel free to comment or have an opinion, you might want to consider there being an issue with enmeshment. If you have your own children but you’re still expected to always be at your parents’ home for the holiday, or your dad drops by with no warning when you’re trying to get the kids down for bed because he needs something, or you spend hours talking on the phone with your mom every day, feeling as if you need to fill her in so she’ll feel like a part of things, you might want to consider just how much your own independence has been supported.

What’s the danger of enmeshment?

Enmeshment can sound like a lot of things. Again, in a certain context, these statements aren’t manipulative. But when they’re repeated over and over, when the message is “don’t leave me, don’t abandon me,” the child or adult child can feel trapped over time.

“You know me better than anybody.“

“I can’t think about you leaving.“

Usually early on, the child is pulled in to serve the psychological needs of a parent — to help Mom stop crying, or to help Dad out of a bad mood, perhaps preventing a drinking spree. That child is told that they’re doing a great job — no one could do it better. “You make me so happy.”

“You’re saving me from myself.”

But guess what? Inevitably, the parent becomes unhappy again because their problems are adult problems and can only be truly healed by their own actions. So the child, who now feels responsible for her parent, fails. She’s not special enough. He’s not smart enough to fix his father’s struggles. To fix that? She or he must try harder.

It can be a lifelong job.

Beth was in her mid-40’s when she came in, talking about the misery in her marriage. But she wouldn’t consider the option of divorce because of how her parents would react, ”It would kill them. I can’t hurt them that much. They would never understand.”

Don’t get me wrong. Enmeshment is very different than asking a child to help you with the garden, or giving them chores around the house. Of course, good parenting is about having expectations. You’re teaching a child about responsibility. But those expectations aren’t the same as pulling a child into a role they never chose to play.

How Does Enmeshment Affect a Child?

Dr. Pat Love wrote a book about this phenomenon, called “The Emotional Incest Syndrome: What To Do When A Parent’s Love Rules Your Life.” She describes the cost to the child, “If the parent represses the girl’s (or boy’s) anger not just once but over and over again, a deeper injury occurs: the girl will eventually dismantle her anger response. Ultimately, it’s safer for her to cut off a part of her being than to battle the person on whom her life depends.”

It can feel like a job you can’t quit. So you swallow your anger. 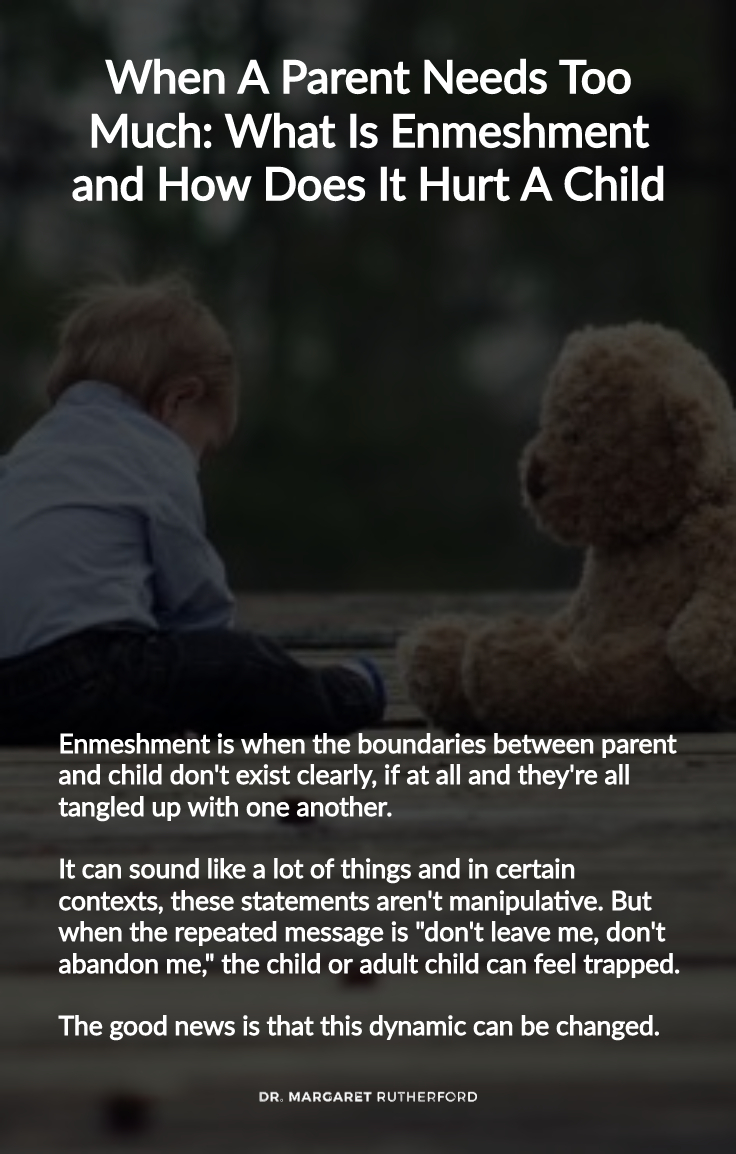 And here’s another irony. If you’re one of these adult children, many people have probably told you how lucky you were to have a parent that sang your praises and adored you so much. It’s difficult to question this bond because you may feel extreme guilt, as if you’re being disloyal for not appreciating all that they have done for you. You fear that you can never emotionally leave nor can you express anger about how trapped you feel. You may look like adults on the outside, but inwardly, you may doubt your own reasoning and capabilities.

After all, aren’t you supposed to check in before making big decisions? The parent’s message is often “you can’t really do life well without me.” Sometimes that message is unintended. Sometimes it’s more than intended… and manipulative.

“I never realized that I don’t make a decision without talking to my mom about it first.”

“I just assumed that I would help with my dad’s business. I never gave one thought to doing something on my own. So, what now?”

Breaking the patterns of enmeshment…

The good news is that this dynamic can be changed. I’ve worked with parents who’ve been able to see what they’ve unintentionally done, and decided to back off for everyone’s well-being. I’ve guided adult children who needed to pull away from the intensity of the relationship. The pattern can be changed, but it’s going to feel odd for a while. There will be space where there was no space before. It can feel a little lonely — perhaps, oddly enough, for both of you. If you’re the parent, finding other relationships that can support you is the first line of business, so you’re far less reliant on your child. If you’re the adult child, you may have become quite accustomed to the parent’s constant contact, and being without it can feel a little shaky. So your task is to build your own sense of identity, while learning to share in healthy supportive relationships.

The parent can confront their own unhappiness, while giving the gift of freedom. The child can discover their own competence, and know that the love of their parent is there for support.