What’s A Nervous Breakdown? Answers to Common Misconceptions About Depression 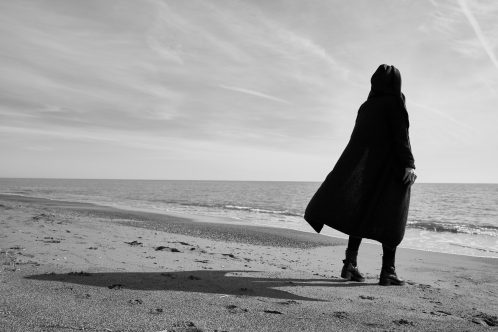 No one welcomes depression.

The brilliant writer Andrew Solomon describes his own severe depressive episode. “All I wanted was for “it” to stop; I could not have managed even to be so specific as to say what “it” was.” He quotes Emily Dickinson’s poem, the first line of which is haunting: “I felt a Funeral, in my Brain…”.

You aren’t you any more.

I’ve been treated for depression twice in my lifetime. They both were moderate episodes; the first triggered by a terrible mistake of a marriage. The second was intricately woven into my experience of menopause. I went to therapy and took antidepressants. And I was lucky. I didn’t stop entirely functioning. My own perfectionism prevented that. But I well remember the feeling as I looked into the mirror that I didn’t really know the person looking back at me. Where had I gone?

But if you know 10 adults, at least one of them, and almost two have dealt or are dealing with depression. And our children are claiming more and more depression.

So let’s talk about what some of the most common misconceptions are out there. So that you can understand what depression is.

These questions are about all kinds of depression, from bipolar disorder to postpartum depression. You may not have heard of all of them, like “adjustment disorder” or “persistent depressive disorder.” But I hear these misconceptions pretty commonly…

“If I can smile and laugh when something good or funny happens, does that mean I’m not depressed?“

Depression is on a spectrum. So if you’ve got a more moderate case, of course you can look and feel better for a while. You can go and enjoy your daughter’s birthday party, or smile and laugh when you reach a goal at work. But as soon as that event is over, you’re likely to feel that numb or heavy or agitated feeling returning. And thinking becomes fuzzier and fuzzier over time. (Make sure you go to a doctor and rule out medical conditions, such as endocrine disorders, vitamin deficiencies, sleep disorders, circulatory disorders and others.)

If you’re severely depressed, smiling and laughing, engaging with others may be almost impossible, as you try to fight off your own exhaustion and loss of stability.

“Is bipolar disorder the same thing as almost having two personalities? Is medication the only treatment?”

This one may seem awfully naive, especially to someone who has the disorder. But no, it’s not that. Don’t get bipolar disorder confused with dissociative disorders where there can be distinct personas. If you have bipolar disorder, you do experience mood swings and may look and sound different when you’re “happier” or more sad.

Medicine is often needed to stabilize mood. But therapy can be very helpful to identify external and internal things that could trigger a swing – everything from lack of sleep or disturbed sleep patterns to certain situations where you might feel extra stress or pressure. Working on skills to help with impulse control and managing moods can be very important. Mood apps are great for this, so you can tangibly see what your moods do.

One man I worked who had bipolar disorder said, “If there’s one thing I’ve learned in therapy, it is to wait and not let my mood determine my next action. Even if only for day.”

“Does chronic depression, or what’s now termed “persistent depressive disorder” mean that you’re in a bad mood all the time?” 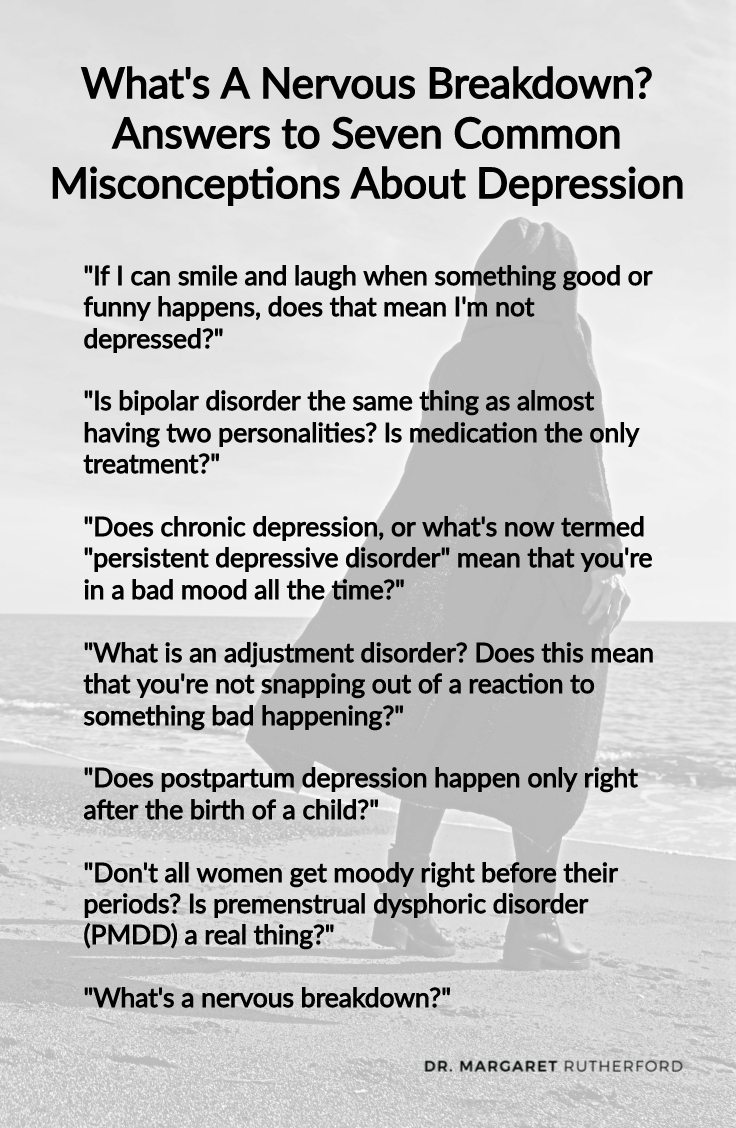 To be diagnosed with this as an adult, your sadness or low mood must last at least two years. So it might feel as if your bad mood is here to stay. You can’t get enough rest, that you tend to look at the negative even though you want to think more positively. You may take things too personally, that you feel victimized or like there’s a target on your back and life is unfair.

I often say about PDD: “It sometimes isn’t until the lights come back on full force that you realize how they’ve slowing been fading, and you’ve been straining and squinting to see for years. It can happen that slowly.”

Identifying PDD for what it is can lead to you finally getting the help you need. And whatever shame you’ve had about your “bad mood” can be let go.

“What is an adjustment disorder? Does this mean that you’re not snapping out of a reaction to something bad happening?”

If you’re depressed, you can’t stand to be told they need to snap out of it — and deservedly so.  An adjustment disorder is depression or ongoing sadness after something very painful has occurred, such as a divorce or an accident. It’s normal in many circumstances. And it doesn’t mean you’re not resilient. It’s simply that you’ve met your emotional match and something has overwhelmed your skill set temporarily.

“Does postpartum depression happen only right after the birth of a child?”

No. It can happen then, but it can also emerge weeks to months after childbirth. And it can happen when a second or third child is born, although everything was fine after the birth of the first child. A doctor or therapist needs to promptly help identify it, for the sake of the mom, of course, but also for the baby. It can be mild but also much more severe, where a mom has lots of trouble attaching to or even caring about her baby. A spouse’s understanding and support is also vital, so that shame doesn’t become part of the picture. And it happens to more moms than you might imagine, up to one in seven.

Even doctors can discount or minimize its severity. An infant feeling attached to, protected by and nurtured by the mother is vital for their own sense of safety and well-being.

“Don’t all women get moody right before their periods? Is premenstrual dysphoric disorder (PMDD) a real thing?”

For any woman suffering from PMDD, this is a hurtful question. These women experience an emotional darkness before ovulation and/or before their periods that is truly paralyzing. It happens to three to eight percent of American women during the childbearing age, and can also look like anxiety, hostility and thinking problems. Obviously, there’s a hormonal influence here. But just think how it would feel to know that every two weeks or so, you’re going to risk losing your stability. It’s a very difficult disorder to have, especially when it’s severe.

This is an older term that was used to describe when your stress level was so high that it caused you to no longer be able to function. That might look like severe anxiety or seeing or hearing things that weren’t there or suicidal thoughts. It’s no longer used anymore; probably the nearest current diagnosis to it is what’s called an acute stress disorder, where you’ve been traumatized in some way that’s outside of your normal experience.

Hopefully you never have depression. But it’s not weakness. It’s not whining. It’s not you feeling sorry for yourself.

True depression is you not being you. And having the support and encouragement of those that love you can make all the difference.

A note: Before assuming anything is due solely to depression, you need to rule out medical conditions, such as endocrine disorders, vitamin deficiencies, sleep disorders, circulatory disorders and others.