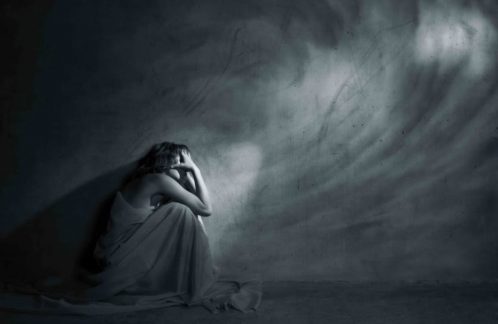 My mother, Betty, was a beautiful, talented, smart woman who never believed a word of that.

There were various reasons for her disbelief. Some of them, I understood. Some, I didn’t — and never will.

At age 35, she searched for help after her first panic attack. She didn’t call it a panic attack. Probably the doctor didn’t either. It was 1960. While quietly attending a ladies church circle meeting, suddenly her heart was pounding. She was perspiring. Her hands grew clammy. The polite, reserved meetings weren’t something she particularly enjoyed, but they were a duty for any proper Southern wife in the 1960’s.

After hearing her symptoms, her doctor gave her a sedative, given commonly at that time. Not often to men, but especially to women. He advised her to take it every day. “Nerves,” he called it. And dismissed her.

Thus began my mother’s prescription drug addiction. That drug was called Equanil. There were others. Fiorinal. Librium. She used them daily for over 30 years.

No doctor ever stopped to try to help her understand the root of her anxiety. They handed her more pills. It’s true that she did not seek therapy. Rather, she ended developing behaviors of an addict, obtaining prescriptions from different pharmacies and different doctors. Underneath her beautifully polished, never-a-hair-out-of-place facade, my mother very secretly danced with her own demons.

What my mother was trying to handle… all alone…

I figured out later, when I entered graduate school (and diagnosed everybody and their dog…including myself by the way…) that my mother experienced multiple levels of anxiety — obsessive compulsive tendencies, horrible worry, and wasn’t a hoarder per se, but certainly was what she would call a “saver.”

She would buy multiple products all at once. Hair spray, deodorant. Then line them up in drawers.

She’d panic if she didn’t have twin bottles of the same medicine (back when the pharmacies allowed you to do that).  One, she said, was for home. The other lived in her “travel bag,” although my parents rarely traveled. She would say quite rationally to me, “What if Dad got sick and needed medicine? And the drug store was closed?” 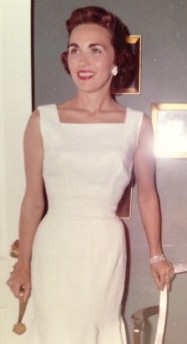 Weeks prior to a party, the dining room table would be elegantly set, silver gleaming. She would check and recheck every detail. She would never eat, making sure every guest had all they needed. If someone was sitting alone, she would chat them up to make sure they felt welcome.

She would get up hours before everyone, to “put her face on,” as she called it. I don’t think my dad ever saw my mom without makeup.

Funny how that comment is a bit ironic now. For now, I see my mom as perhaps the first perfectly hidden depressed person I knew. The makeup, the hair she wore in the same style for years, her immaculate clothes, her extremely thin waist — all were coverups, masks for tremendous anxiety and insecurity. I never saw tears. I never heard her voice raised in anger. She could be disapproving, yes. But not angry. She was controlled.

In her late 60’s, she realized she had a problem. She could no longer metabolize the medication. She was irritable. Acting irrationally. Driving erratically.

I remember a long conversation.. She still needed to remind me that everything she’d taken were prescriptions from doctors. There was no pill that could help her now. She’d been trying to wean herself off, and she could barely walk by herself. We were sitting side by side on the love seat in their den, when she decided she would go for help. It was the last time she would seem emotionally present to me ever again.

She got off almost all the drugs. leaving only an antidepressant and a very mild, non-addictive anti-anxiety med. It took several months.

Without the mix of sedatives, painkillers, and benzodiazepines, Betty was no longer Betty. 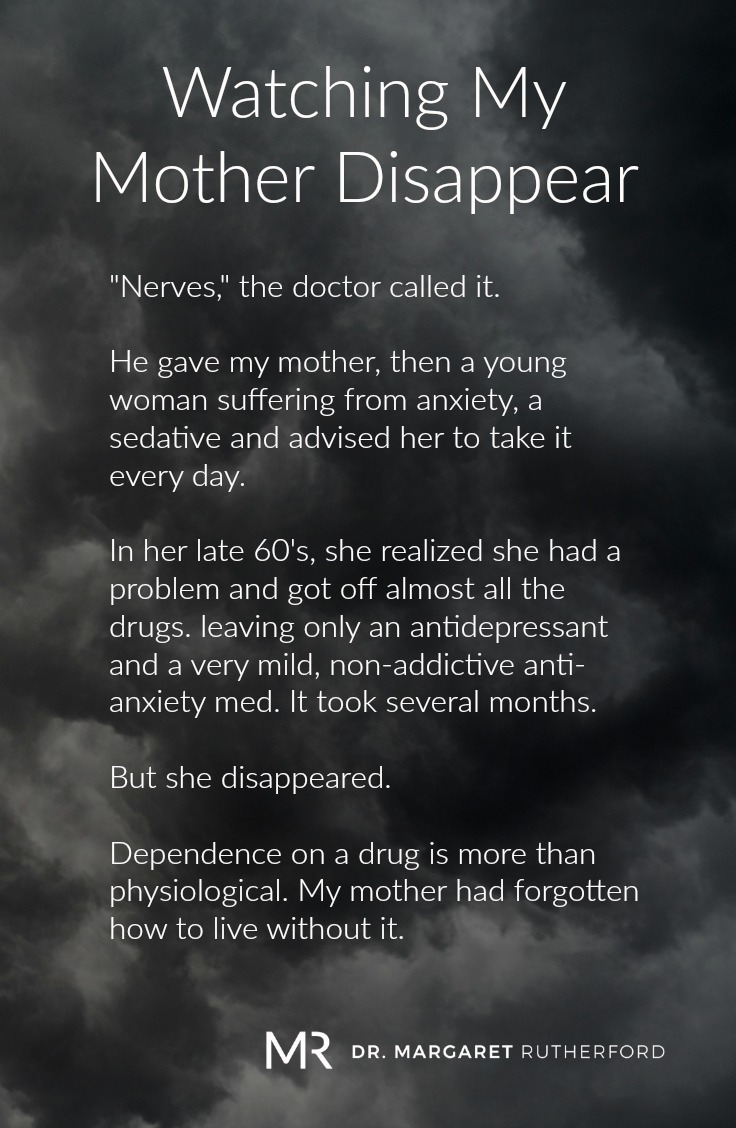 She was a shell of herself, and had aged 20 years. There was evidence of neurological damage – whether or not that occurred independently of the multiple medications she used, we will never know.

For the last fifteen years of her life, she remained almost mute. She would speak when spoken to — smile only when something inside of her remembered that that was the socially appropriate thing to do. She walked hesitatingly, and as the years went by, almost as if she had Parkinson’s.

Dependence on a drug is more than physiological. My mother had forgotten how to live without it.

I might catch a glimpse of her old self if I called at just the right time, around 7:30 at night. Her rituals for the day would be over. She would ask a question or two. There would be a slight lilt in her voice. Maybe she would laugh.

It was welcome, but painful to hear. Because I knew it would be a fleeting moment. And then gone.

I’m far from the only person whose relationship with her mother was problematic. She stayed way too involved in my life for way too long, and I allowed that to happen. I know now that she wasn’t all that happy living her life, so mine was perhaps more exciting to live with me. Other mothers don’t give the time of day to their children, or even worse, make those days horrific. Mother’s Day becomes a day to get through, try to avoid the myriad of places where moms and daughters walk seamlessly hand in hand.

If you do share a loving relationship with your mom, and do things together that continue to build a sense of trust and intimacy, relish that time you have together.

But maybe you also have a mom or dad that you’re watching disappear with alcohol. With drugs. Maybe they are in denial. “I need it to sleep.” “It’s prescription.” “I get up and work everyday – it’s not like I’m an alcoholic.”

But you see the changes in them. You aren’t in denial of their problem. Only they are. I’d strongly recommend Alanon or Narc-anon. It helps to hear other people’s wisdom and how they’re staying in relationship, but with detachment.

We live in a culture glorifying escape. We don’t know how many people are actually using benzodiazepines, drugs that immediately soothe severe anxiety.  But it’s a lot.  People share them with their friends. Kids steal them from their parents.

What my mom would wish for you… and me…

Escape can be very easy to justify. Yet my mother’s world was far from glorious.

She whispered to me, maybe two years before her death, using the halting, breathy voice that became all I would hear, “I wish I had known what I was doing to myself.”

You’ve heard her story. She would want you to know that there is another way.

And to my Mother. Whether you knew it or not, you were beautiful. And talented. And smart.

I missed you then. I miss you now.

Click here for “Marriage Is Not For Chickens,” the gift book by Dr. Margaret! It’s perfect for engagements, anniversaries, weddings, or for the person you love!