It has been almost three years since I wrote my first post on Perfectly Hidden Depression.

Since then, I’ve received hundreds of emails from people, from all over the world, who have reached out to me. They’ve taken the questionnaire, they’ve listened to my podcast, or want to help with my research. I’d have to stop seeing patients myself in order to have the time to talk to each and every one.

What is Perfectly Hidden Depression or PHD?

I thought you might like to hear the answer from the people who’ve written to me. Their words are no longer my words, describing a syndrome or condition that I’ve conceived as PHD. What follows are the words of people who are creating a facade of the perfect life, while hiding loneliness, exhaustion and despair. Some are well aware of what they’re doing. Others are beginning to realize, perhaps for the first time, that they are growing more weary of keeping the secrets that haunt them. The stories I chose aren’t the most dramatic examples I’ve heard, describing scenes where they were holding a gun to their head or considering some other way of killing themselves. Yet these voices speak clearly of the vast difference between what the world believes, and what they know in their quietest of times about themselves.

I found them compelling in their simplicity. (I’ve also changed the details so as to maintain their anonymity.)

I am almost embarrassed to be depressed. I feel like if I went to a therapist it would be wasting their time — there are people out there carrying much heavier burdens than I am, certainly. But I am starting to think I need help. My sadness is sort of a constant thing that I deal with (like a low-grade headache that you can forget about sometimes) and some days I feel great. But then something will happen to tip the balance and I am lost. Ever since my dad passed away in July it’s been so much harder. I want to sleep all the time. I don’t want to take care of my house (but I do since I don’t want anyone to see it messy). I don’t want to go out with friends (but I do so they don’t think I’m ignoring them). I even feel angry a lot over dumb stuff — I have never, ever been an angry person. But I don’t want anyone to know it (I almost can’t make myself NOT be happy around others, if that makes sense?).

I feel like I am wearing a mask when I’m out in public. I work with high school students and most of them spend a lot of time in my office because I’m really good at letting people talk (no judgment or advice, just an ear). I think most of my friends and family like me for just that reason. They like Casey the Listener, Casey the Sympathizer, Casey Who Doesn’t Make Fun of You. But they have no idea how there is this constant ache in the pit of my stomach, or how tears are right there behind my eyes. I don’t think they would even want to hear about my problems….they like to talk about themselves and 99% of the time I am ok with that.

It’s like a constant undercurrent, invisible to most casual observers. It doesn’t seem to characterize me. I’m a smart-ass life-of-the-party and all that. But it’s still there. And when it comes out from time to time, people around me are shocked.

I’ve achieved far more in life than I expected. I’m 47. I was the first member of my family to graduate from college. 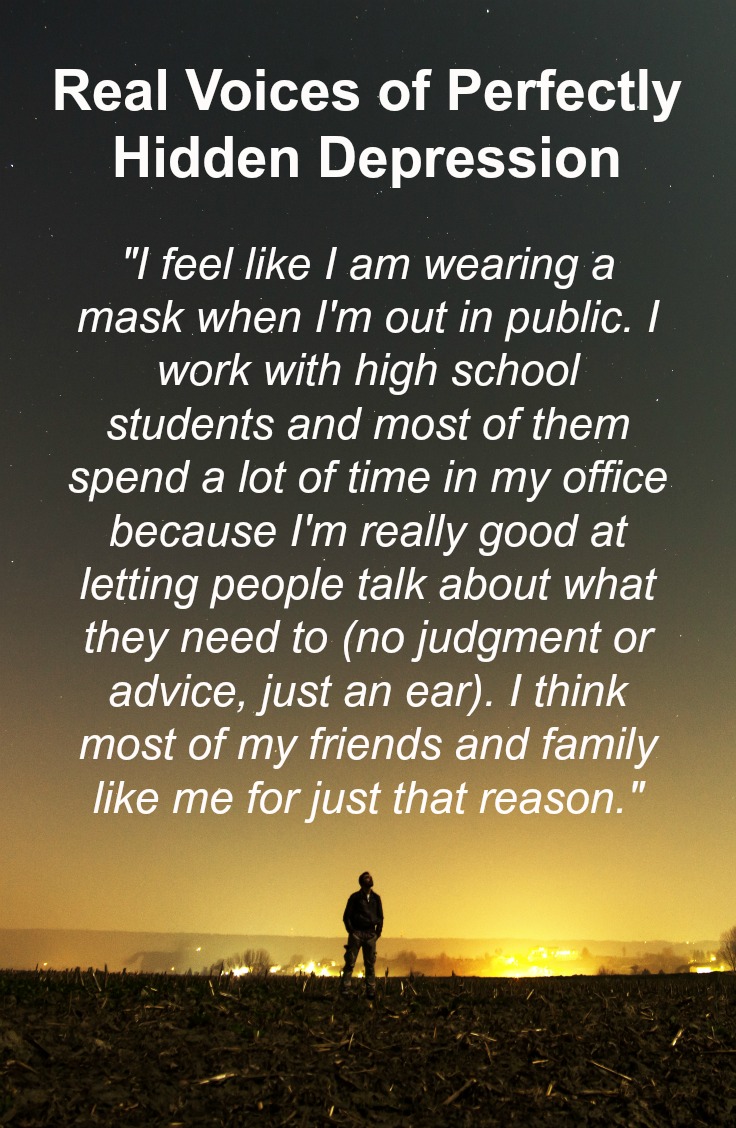 Two failed marriages. Both were results of hidden despair. I mean the marriages themselves were the byproduct of my despair. I wasn’t emotionally close to either wife. I thought I could be successfully married while managing the relationship in some rational way that would let me remain strong. Or at least seem strong. And I didn’t want to be alone. I wanted the negative to go away. I denied it.

I have secrets I’ve kept from everyone.  I’ve never trusted anyone enough to fully confide in them.  I keep myself distracted with adrenaline feeds from triathalon training.

It’s still there. This thing. Always.

I find I need to constantly shift my focus away from death. I’m fixated on it as a target. I don’t plan to hasten its arrival, but I’m not doing much to keep it away, either.

And in my darkest moments, I realize I’m not that special. I believe there are millions more just like me.

From Robin, currently a student:

So you know a little of my past I am the daughter of a drug addict. My mother did pills all of my childhood and it was what many would say very traumatizing. I still have a problem believing this because I always seen this as “normal” and would tell myself things were not that bad and I was just being sensitive and went on with my life. I always worked hard in school to have straight A’s, I also have a habit of caring for others and trying to make sure they accept me and think I’m great. As irrational as it is anything less than perfection makes me hate myself. Yes I’m the student who got a 104 on a biology exam and was upset that I missed one bonus question, I would cry in my bathtub over getting a B on a math exam, and even hit myself when I got a low B on a statistics exam. If I’m not excelling in school I feel worthless, pointless, and frustrated. I can honestly say at this point in my life I don’t love myself. I love only the part of me that is capable of achieving great success, the part of me that is responsible and can take care of others, the part of me that is put together.

You may know these people. Maybe she’s your kid’s teacher, your hanging buddy, or your classmate.

Maybe you also hide by trying to look put together, focusing on others, avoiding painful emotions or vulnerability, and being the person who is successful at whatever you try to do.

You don’t have to.

The people above wrote to me because they felt understood. They were either thanking me for writing about PHD, or wanting to help in some way — so that others wouldn’t have to live the life they were living.

During one interview, I was laughing a bit, and describing the difficulty of trying to get my ideas published. The woman had been calm and engaging, and suddenly, I heard her voice crack. I realized she was crying. “Please don’t give up.”

I’ve worked with too many people just like Casey, and Jordan, and Robin to give up.

And if you suffer from PHD, maybe it’s time for you to reach out — and be known.