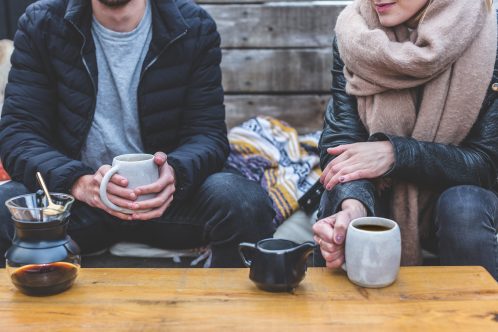 For many of us, summer is around the corner. Maybe that means a much anticipated vacation with some all-too-rare time together with your partner.

Or maybe that is something you dread, because you fear fighting.

You love your partner and you value your relationship, but the two of you have developed a habit of falling into fights more and more frequently. You’ve come to associate time together with an inevitable argument.

It doesn’t have to be that way.

A lot of fights occur because we’ve taken too personally what our partner has done or said, not done or not said.

“If she knew how hard I was trying, she wouldn’t have…”

“If he really cared about the kids and me, he would…”

We consider their actions to be about us, or even intentional actions to hurt us, and we tell ourselves that this is the reason why our partners are acting the way they’re acting. We personalize their behavior.

Nothing could be further from the truth.

What’s the question that will help?

There is a simple question that will help you step out of the fighting pattern you’re in; I learned it from working with people just like you. Before you allow yourself to think any of the above, ask yourself the following:

“What do I know about my partner that would explain her/his behavior that has nothing to do with me?”

It’s so simple, but an eye-opener

Here’s a fairly recent example from my own life.

One early spring Saturday, my husband and I were shopping at our local grocery store. He decided he wanted to buy some hanging plants for the deck.  We had cold groceries but I figured he’d be quick. I had a bunch of stuff on my to-do list for the weekend but I was trying to be nice. So I told him, “Sure, why not?” And we headed to the nursery.

What I didn’t consider was the sheer volume of plants that were available..He ended spending what was, for me, a tremendously long time comparing and analyzing.

I began getting a little panicky. We were in the back of a warm tent and the place was stuffed with colorful plants as well as smells galore and an overwhelming (for my little anxious self) number of people. Toss together my problem with getting squeamish in crowed places plus a bit of claustrophobia with my impatience about the time it was taking, and you’ve created a likely disaster.

I needed to get out of there.

My husband could tell I was getting agitated. I was sighing and looking at my watch. But he was having a marvelous time, being the horticulturist in the family. There was tension.

He could’ve thought, “Well if he/she really cared what I good time I’ve having… she wouldn’t want to leave…”  I might’ve decided, “If he really understood me, he would remember that this kind of situation makes me panicked…” and we would’ve been off to the races.

Instead, I walked over and said something like, “I’m freaking out a little. Sorry. Take your time.” And he responded, “It’ll be just another five minutes. Thanks.”

Why did I handle it that way? Because I followed my own advice. I didn’t take it personally. and asked myself the simple question, “What do I know about him that would explain his behavior that has nothing to do with me?”

He was immersed in an activity he was thoroughly enjoying; not only was he not thinking about me or my panic, it would never occur to him I would get panicked in a darn greenhouse. He knows I don’t do big box stores very well, but in some place surrounded by greenery? He wouldn’t have given it a thought.

It’s amazing how in small situations like this, things can escalate and huge fights can take place.

It takes remembering and practicing…

So, next time, you can practice.Let’s say you’ve asked your partner to call you when he reaches his destination. And it’s two hours past the time he’s supposed to get there. You immediately want to completely go nuts and feel abandoned. Stop and ask yourself the question. 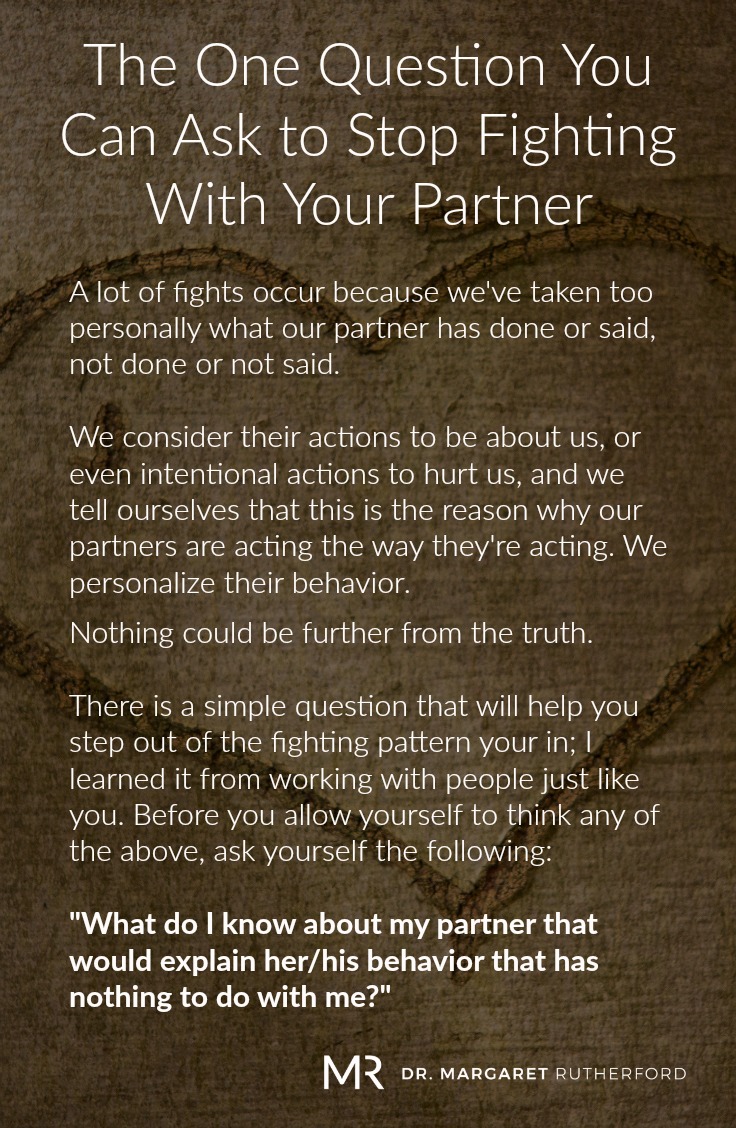 “What do I know about my partner that would explain her/his behavior that has nothing to do with me?”

“Well, he’s forgetful. He forgets to charge his cell phone, and it’s probably dead. Or he gets really involved in whatever is going on around him. You are always the one who remembers to call. He’ll remember when he is going to bed. Why don’t I call him?”

Anything but taking it personally.

Or the next time your partner overdraws her checking account. Instead of immediately saying that she’s doing that to piss you off, that she has no respect for how hard you work and is being selfish, stop. Ask the question. Remember that she grew up in a home where she was not taught anything about finances and that she’s said more than once that she struggles with money and needs help. (Probably not from you, by the way, but a more objective teacher.)

Most of us don’t wake up and think about how we can make our partner miserable today.

We just don’t. And if you believe your partner does have an agenda to intentionally hurt you, then we’re talking about an entirely different situation. And one that has the potential to be abusive.

It’s an easy question to ask, so give it a try. Tell your partner what you’re going to try to do. Invite him or her to join you.

It’s one question that can cause remarkable change in your marriage or partnership.