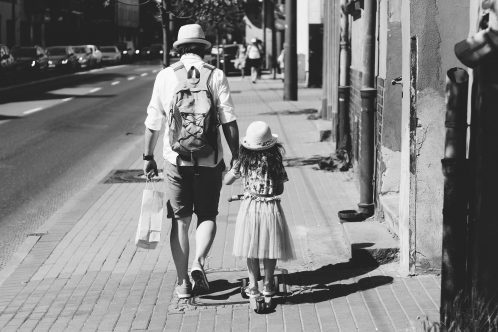 When I was in my early twenties, I called my Dad and asked him to have lunch with me.

“Don’t you want your Mom to come?“

“Okay. Sure. Where do you want to meet?“

Up to that point, when I would call home, the conversations would always begin like this, ”Hey Pris!” he would gaily exclaim. “How are you? Let me get your mom.” I would hear him put the phone down, footsteps trailing off to go find my mother. “Betty, Margaret’s on the phone…”.

It’s not that he wasn’t interested. I’m sure that after the call he would ask my mother what we had talked about — what tidbits I’d shared with her of what was going on in my life. My father and I just didn’t talk much. But I was twenty-three years old and I wanted to get to know my father; I longed for a more direct connection with him.

We had that lunch together, just the two of us. It felt awkward. But it also felt like I was turning a page of a book that I desperately needed to read. The process would take us about twenty years to accomplish. Slowly but surely, we developed our own relationship.

What was that book about? It was a book on what’s termed enmeshment — when there aren’t appropriate boundaries between two or more people in relationship with one another. And my mother and I were very enmeshed. I knew way too much about her adult life. I’d been her confidante in many ways. And she was way too involved in mine.

The lunch with my dad was my first move to begin to shift away from that strange and unhealthy loyalty that suggested I was doing something wrong by having a relationship with him — apart from her.

Many years later, my dad explained his distance from me, “Your mother needed you more. So I stepped out of the way.”

A Story of Disappointing My Dad…

Don’t get me wrong, my dad was there when I needed him. Really needed him. And sadly, I gave him more than his fair share of opportunities, as it took me years to gain the emotional maturity I needed to lead a stable and independent life.

I will never forget my father driving the U-Haul to help move my stuff out of the first house I’d ever bought. I’d been married and was getting divorced. I was bouncing around in the front seat, chatting it up with a guy I was already involved with and acting as if I didn’t have a care in the world.

I glanced over at Dad. There was a single tear rolling down his cheek. I had to look away. I pretended I hadn’t seen his disappointment in me.

That tear etched itself in my memory, causing me inner shame and intense grief. It would take me years to apologize to my father for the immature, self-centered girl that I had been. When I finally uttered those words to him, regretful tears slipping down my cheeks, he looked at me with a little surprise. And forgave me.

Why do I tell you all of this?

It was a wonderful moment between us. Fortunately, there were many others before he died in 2007. 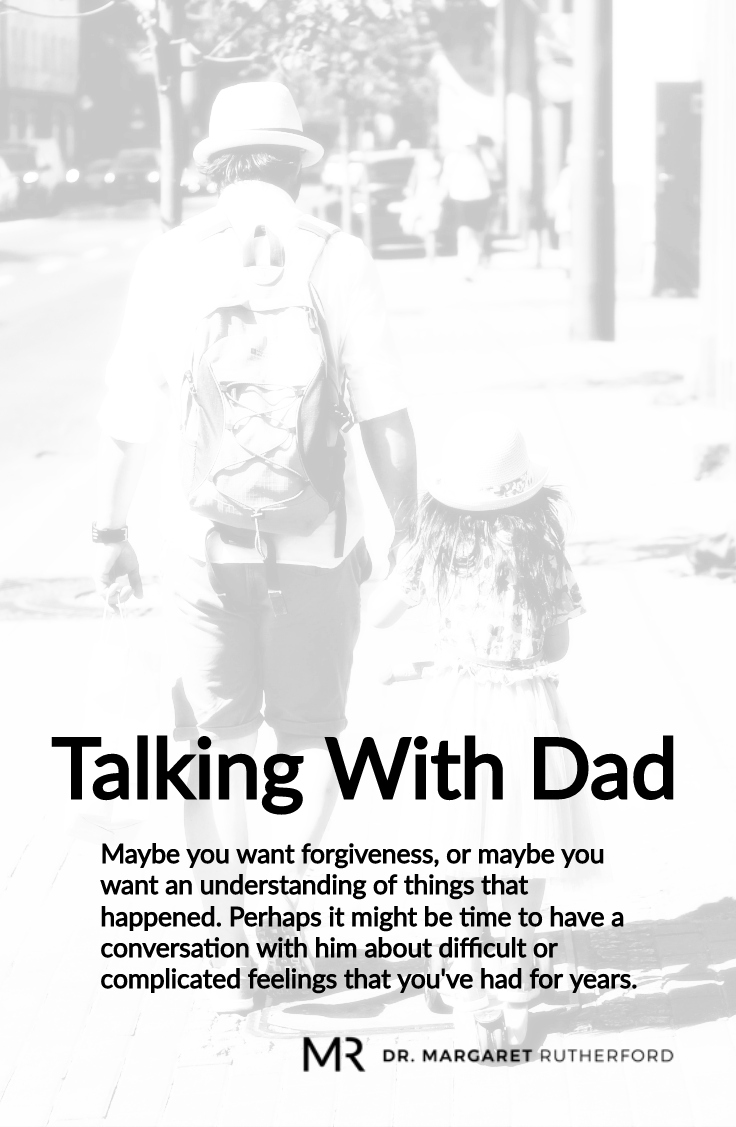 Fathers can be so important, from childhood and well into adulthood (which takes some of us a little longer than others to achieve).

It can take years for a relationship to blossom into becoming what it can be, but it’s worth the work. It’s worth not settling for what it started out like.

You may not have a father like mine. You may have had an abusive, angry, or controlling father or stepfather. Or perhaps your father was not part of your life at all, due to tragedy or absence, in which case you have to mourn the void left where there should have been a loving, supportive man to guide and nurture you.

What you need to know before you risk vulnerability…

Perhaps my story makes you wonder if you could have a conversation with your own father. Maybe you want forgiveness, or maybe you want an understanding of things that happened. Perhaps it might be time to have a conversation with him about difficult or complicated feelings that you’ve had for years. It can be very vulnerable to do this. So what do you first need to consider?

You have to decide if he is capable of having that conversation without becoming defensive, irrational, angry or blaming. And of course, you need to be able to do the same.

If not, it’s not a good idea to try. You’ll get hurt all over again. But it can help in a way to realize and accept that he isn’t withholding something from you that he’s capable of giving. He simply doesn’t have it to give.

I was lucky and blessed. My father did have it to give. And more. He gave me the gift of understanding and forgiveness.

It’s a gift that I’ll never take for granted.

You can hear more about relationships and many other topics by listening to my podcast, SelfWork with Dr. Margaret Rutherford. Subscribe to my website and receive one weekly newsletter including my weekly blog post and podcast! If you’d like to join my FaceBook closed group, then click here and answer the membership questions! Welcome!