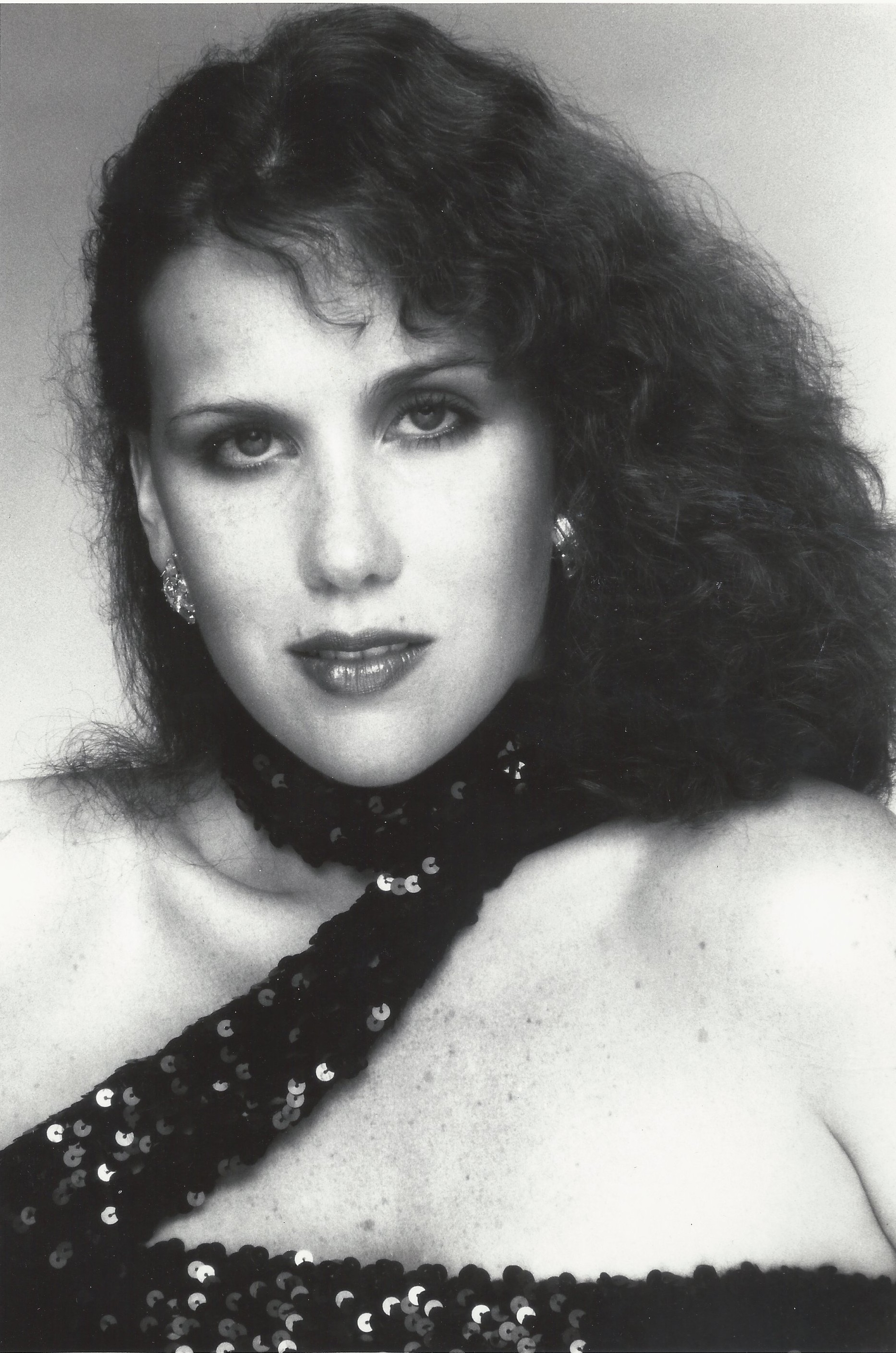 Evidence that I could wear these things!!! Don’t know how I worked the scarf. It probably fell off most of the time. Eighties BIG hair.  Photographer must have told me to lean forward so my collarbone would stick out like that.

There they were.  Stashed at the back of one of the guest room closets.  Sequined tube tops.  Very eighties.  Deep purple, ruby red and black.  The tops are very small.  I cannot imagine wearing them.  How in the hell did I fit into them?  Now they might possibly fit my leg.

What am I saving these for?

They bring me back to the story of my life as a nightclub singer. That’s when I wore them.  Early and mid-1980’s.

I was really pretty bad at first.  My first gig was at a Greek restaurant called Goldfingers.  Was hired to  sing country music (which I didn’t sing) with a Greek band (that didn’t know how to play country music).  I came on right after Ruthie the belly dancer.  Me, the Phi Beta Kappa graduate.  My mother was so proud.  I actually had people try to put dollar bills in my bra as well.  Not cool.

It got better after that.  I graduated to much better gigs.  Eventually began to sing jazz.  But the whole lifestyle never suited me.  I had grown up in a family where we were secure financially.  In this new world, a hotel that hired you to entertain for three months was a big deal.  You were to be congratulated!  I didn’t know how to handle that ambiguity.   I adored singing.  That was what kept me in it for seven years.

The other part I hated was the constant selling of myself.  I was a jingle singer during the day.  Jingles.  They are radio and TV advertisements that are sung and recorded in studios.  That business was extremely competitive.  There were only a few spots in the top market – a few voices that were consistently hired.  I made it to the second tier – but never quite to the first.  For a number of reasons.  Some of which I am proud of actually.  I will leave that to your imagination.

What I loved about singing in nightclubs was the people I met.  People who loved music.   Hearing stories about who they might have heard perform a great rendition of a jazz classic or talk about an artist that they admired.  Met a few famous people.   Meryl Streep once.  I was the entertainment in the hotel where she was staying.  She was at the bar and said hello.  That was nice. I remember that bar well because it had a cascading waterfall which was difficult to sing over and made me want to use the restroom all the time.

I am sure he doesn’t remember but Verne Lundquist used to come hear me sing at a place called “Le Louvre” in Dallas.  When I worked the Fairmont in Dallas, I met many stars who were featured in the main room.   Some of them had a drink at the Pyramid Lounge where I worked. A couple sat in.  Joe Williams who was a great jazz singer did that once.  Made my life practically at the time.   That was very special.

Funny things happened all the time.  A guy was subbing one night.  He was a piano player.  I guess his wife was mad at him. She walked  up to the stage, threw a drink on him and then walked out.  We kept on going.  It was pretty amusing.  Another night, there was absolutely no one in the place.  And it was late.  One couple came in.  Sat right by the speakers.  We started playing, as we were told to do of course.  They asked us to turn down the music.  Twice.  Not music lovers I suppose.  At a barbecue place, I was the target of a few bones thrown. (Once again, I was not a country music singer and that’s what they wanted to hear).  I quit  that night.  Bones were not in the contract.

Such a glamorous life, that of the nightclub singer.

I haven’t sung a note in several years.  I miss it.

What am I saving these sequined tops  for?  Leggings?