Reaching Peace Within Yourself: What I Learned From My Dad About Compromise 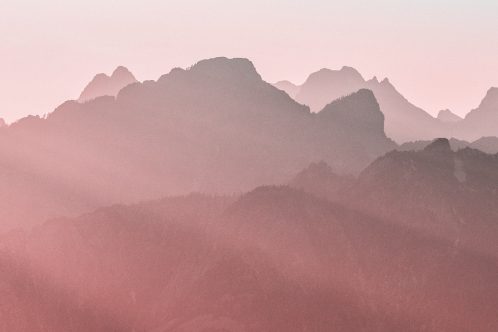 My dad used to tell me from time to time, “Margaret, life is about compromise.”

Considering the massive amount of wisdom I’d accrued by the age of twenty when I first heard him say this,  I silently shook my head and decided that my father’s early health problems had colored his thinking.

After all, there were many things in his own life that had been hard. He’d lost his dad as a teenager and gave up any idea he might’ve had to be an engineer or a doctor to stay home and run the funeral business. He’d had a heart attack in his mid-40’s and missed a chance to run for (I was told he was a shoe-in) the presidency of the national organization of funeral directors in which he’d worked hard for and believed in its purpose. Those were major things in his life that had been hard. So I thought he was focusing on the negative — on what you gave up in life instead of everything that could be accomplished. I was sure that with enough effort, and maybe a little good luck thrown in, you could achieve exactly what you wanted.

And if you listen to all of the accomplishment gurus out there, that’s absolutely true.

Now I know what he meant.

He wasn’t being negative. He was being realistic.

Life throws you curve balls. Some you may hit; many you don’t. You can either focus on the opportunities you missed, the things that didn’t work out, the goals that you strived for and simply couldn’t attain — or you can look at what did. You’re far more content if you do the latter. Why? Because you can get lost in the “what if’s.”

Focus on the past and your present will be defined by it. Focus on the present, on what is that is good, and you’ll find your own peace.

To do that, you have to compromise, within yourself.

The definition of compromise involves concession, giving up something. You get some of what you want, but not all. We think of compromise as something that happens between two people or entities. Countries compromise and reach treaties. Happy, healthy couples concede to one another in a fair, respectful way; each partner will concede  the other partner’s opinion or desire, and can see why the concession works for now.

But it can be harder to see within yourself.

The vital importance of internal compromise…

Inner or internal compromise means that you may have warring struggles; you want one thing but something else happens. Or you have two feelings that are contradictory. You are mourning something while you recognize its meaning. Even with immense tragedy, compromise leads to finding your own peace. 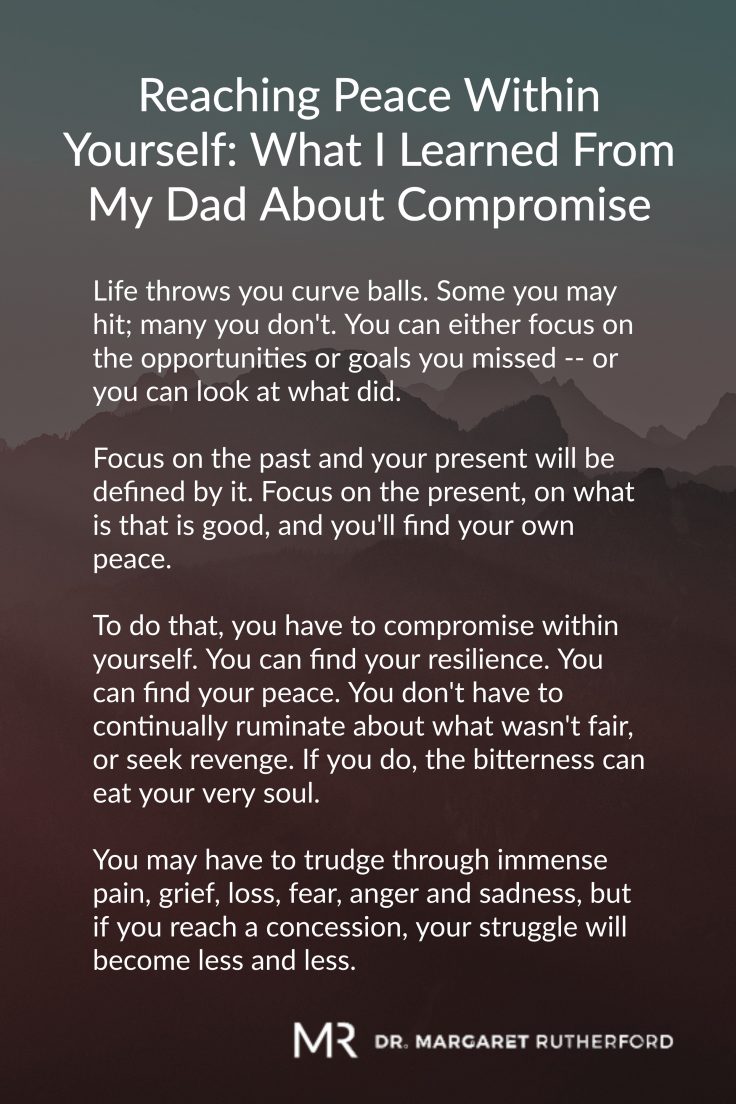 Through the years, many people have described their lives to me in therapy. Marriages have been cruelly ripped apart, drunk drivers have killed sisters or brothers, childhoods have been sabotaged by horrific abuse, addiction has overwhelmed their partner, chronic mental and emotional illness have made life more than difficult, or parents have buried a child. It would be easy for any of these people to become bitter. Life hasn’t been fair or just. They’ve certainly not gotten what they wanted. Their grief can, at times, consume their entire being.

But you can reach peace within yourself. I’ve also listened as these very people have said things like, “I never would’ve had what I have now if it wasn’t for what I’ve been through.” Or, “I didn’t think we’d survive as a couple, but somehow, we’ve managed to become even closer.” Or even, “This nearly killed me; I’m not the same person I was. I never will be that person again. And I can live with that.”

The “what if’s” can drive you crazy. There is never a good answer. You may have to trudge through immense pain, grief, loss, fear, anger and sadness, but if you reach a concession, your struggle will become less and less.

My father didn’t wage war with what wasn’t. What never happened. What life hadn’t brought him. He compromised. He conceded. And he focused on what he’d gained.

I hope I do the same.

You can hear more about perfectly hidden depression and many other topics by listening to my podcast, SelfWork with Dr. Margaret Rutherford. Subscribe to my website and receive one weekly newsletter including my weekly blog post and podcast! If you’d like to join my FaceBook closed group, then click here and answer the membership questions! Welcome!