I have not heard a peep from my son in a week.  An entire week.  Got a call from a strange cell phone number and heard his voice say, “Mom, I can’t find my (new) phone, I may have lost it, but I can’t really talk now.  You probably won’t hear from me for a few days. Gotta go.  Oh, love ya”.  One little email during the week, literally one sentence.  Actually a question of whether he should join something he had been asked to join.  Well, at least my opinion was asked.  I felt very good about that actually.  I nearly fell over myself answering his question.  Must have sent three e-mails back to him.  So pathetic,  so eager… where’s the picture of that puppy from the last blog?

It’s almost easier when I don’t have contact with him.  Funny.  I can kind of shut off my “mom-ness”.  I have gotten involved with a first ever fundraiser for the local Free Health Center.  Had a medical procedure on my hand for a condition called Dupuytrens two weeks ago and can open it for the first time in nearly, well I’d say at least six years.  Hurt like all get out but it was worth it.  A shot called Xiaflex.  Auditioned for a play and got the part.  Haven’t been in a play for YEARS.  Neil Simon’s “Rumors”.  That will be a blast.  Got the part of the older woman in the cast… hmmm.  But let’s see, she’s kinda of a loony person who can cook, has back pain and complains about it a lot.  Well, some would say I won’t even have to act!!  So busy busy busy… one would wonder if there is a bit of contrivance to all of that. 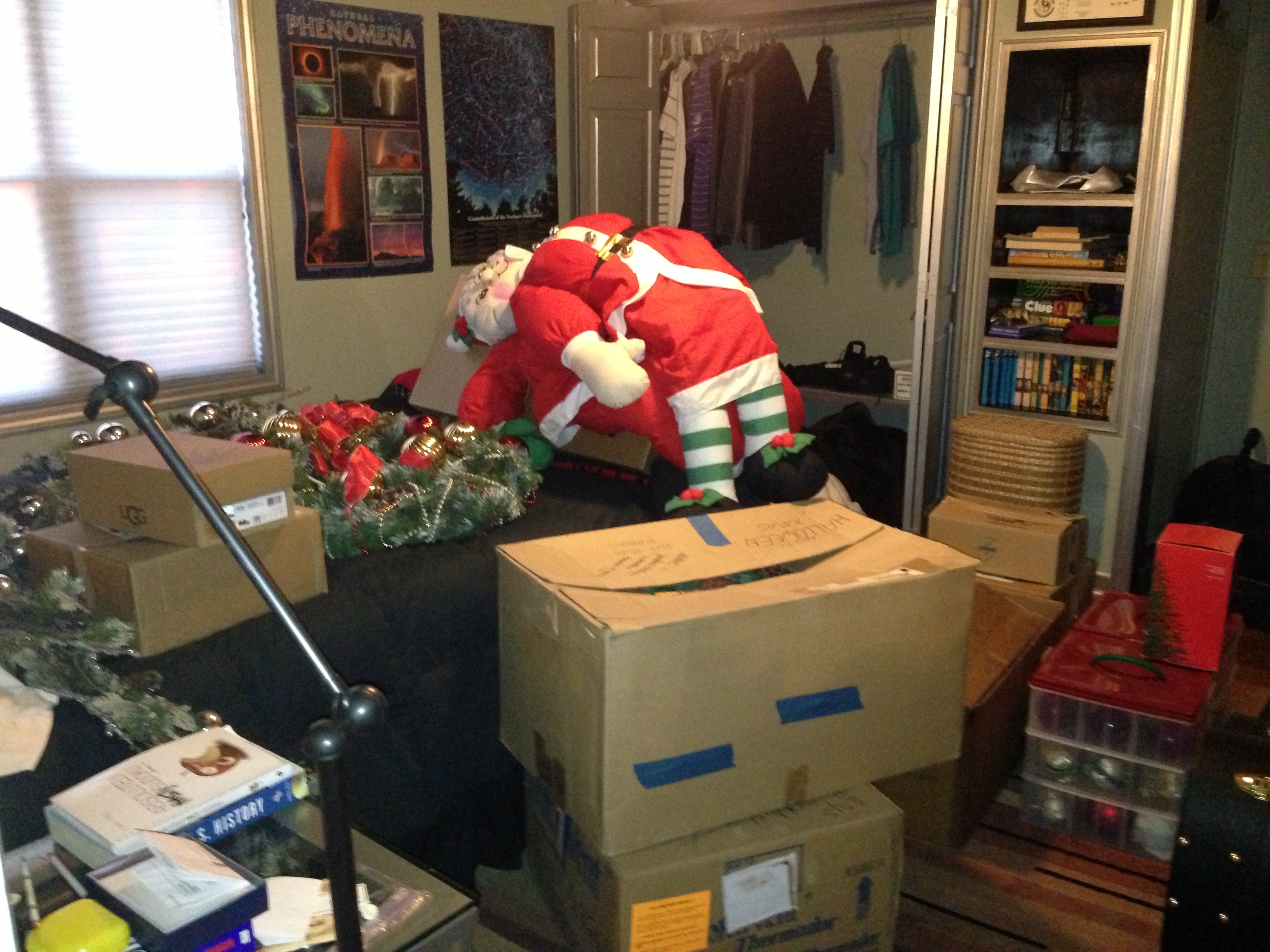 And then there is his bedroom.  It is full of boxes of Christmas stuff.  The wreath is on his bed.  Normally I would be really complaining about this.  When I go by, I  think about how I wish my husband would get the damn boxes into the attic instead of Rob being gone.  The irritation actually feels better so I don’t say anything.  Well I just realized that normally it couldn’t happen because normally he would be home. He would be sleeping in that bed.  The boxes would be in the other upstairs bedroom like all the other years.  That just made me sad.   Got a lump in my throat.  So the gig is up.  Well that stinks.

We are remodeling some things, again keeping ourselves busy.  Projects we have been meaning to do for years but just couldn’t get around to it.  Suddenly you see where the dog has scratched by the front door so hard that all the finish is off the wood.  That window that you didn’t open because you couldn’t get it shut without one of you going outside and then both of you yanking and pulling it shut together with whoever opened it in the first place, usually me, feeling stupid,  now seems possible to think about replacing.  Recently, I heard a friend whose only child left for college last August say, “I just didn’t realize how much time I spent on him and how much time I would have to do things for me”.  Well, yeah, some of that is welcome.  Some of it, not so much.  But if I don’t watch it, I will take on way too much.  I did say “no” the other day when someone asked me if we would sponsor a exchange student from Germany in our home.  Sounds neat but not now.  I am still grieving my own, thank you. 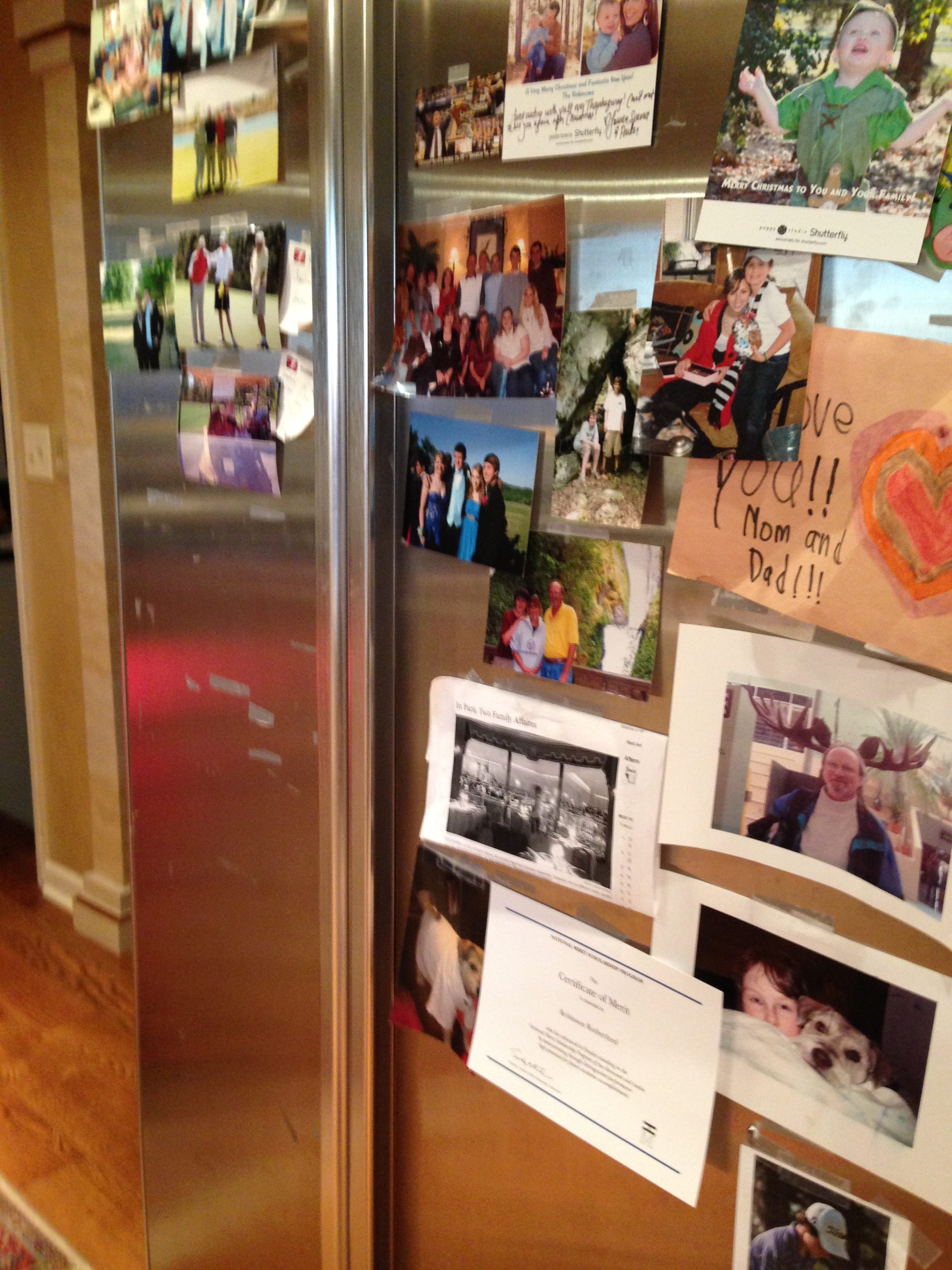 Empty spot on left is the Cowboy grave site.

The fridge is looking odd as well.  We, like most of  America, cover our fridge with pictures of our child.   But as I have said I keep forgetting to take new ones.  Even I am tiring of looking at prom pictures from last May but they remain.   I had to take my beloved Dallas Cowboy schedule down which covered a good deal of the fridge because that was such a strikingly painful memory.  The schedule hid the tape that I can’t get off so now we can see all of that as well.  Thank the good Lord for my great nephews and a few oldies but goodies which stay up constantly and are good for a giggle.  My favorite is the one with my husband looking as if he has moose horns growing out of his head.   That almost made it to Christmas card status one year.

I am realizing that we are near March and I am still posting pictures with a Christmas theme.  Real life can be a little embarrassing.  But my son is supposed to come home in about ten days so hopefully all red and green will be put away.

I am again struck by the thought of how in the world parents whose children have actually died function.  I know they do; have worked with some of them and frankly told them I cannot imagine the intensity of the pain they must feel.  That quick realization always offers perspective .  But then we are really talking apples and oranges and I am going to give myself the permission to do what I need to do, just as I would a patient of mine.

So with that note to actual tragedy, here he comes again.  My son.  Back for just part of spring break after all.  Plans didn’t work out completely so we get him half the time.  And of course, I didn’t take the week off and will have rehearsals at night for the play so I won’t really be available very much.  Great.  But we will manage.  I will love having him here, his energy, his laugh, just him.  Maybe we can go to a movie.  Or cook something together.

I’ve got to remember to take some pictures.