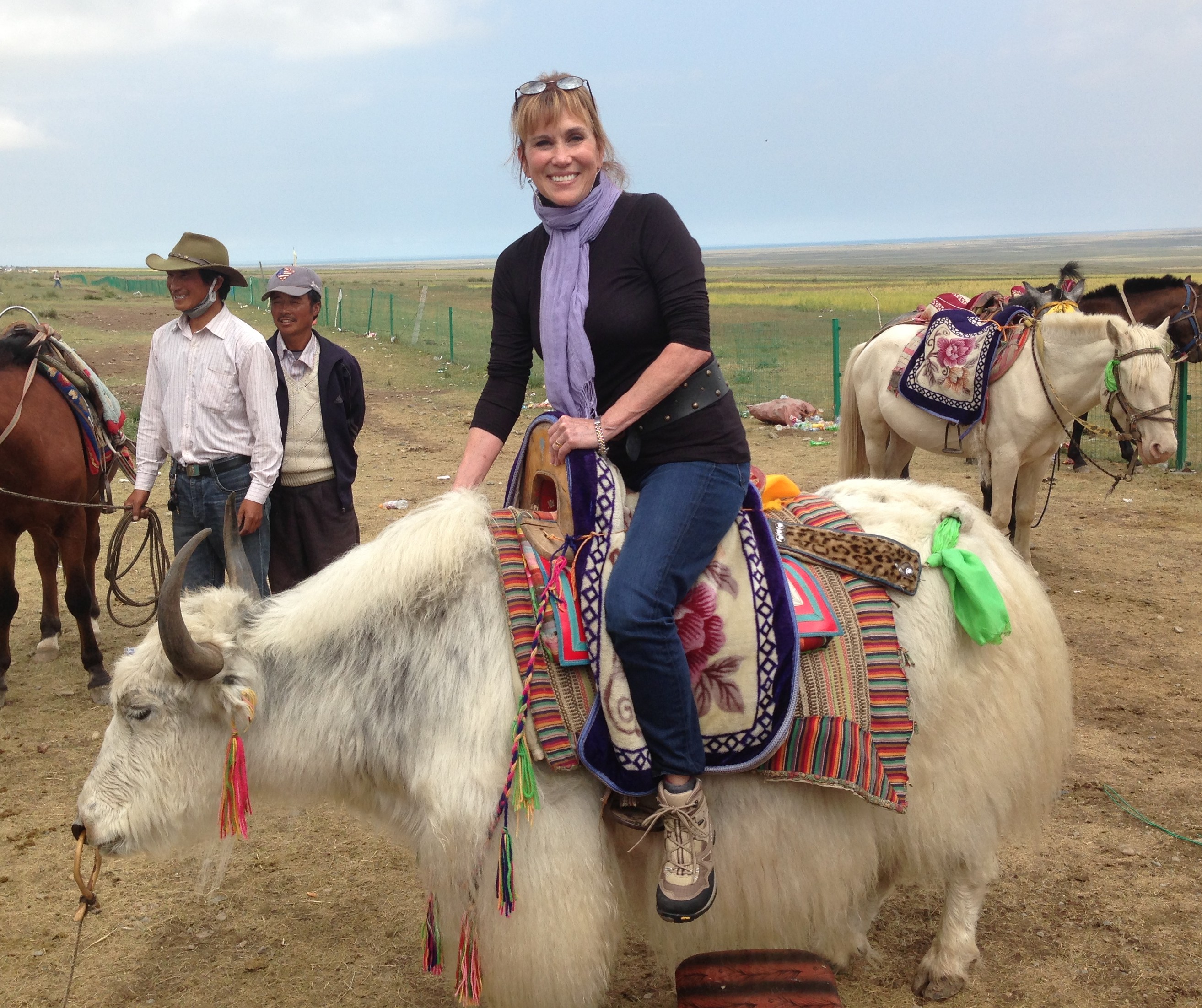 Boy, did I ever figure out a doozie of a way to take my mind off my empty nest within the last two weeks!  A trip to northern and western China was one of the most unusual and fascinating experiences of my life.  That’s a yak to the left.  I am not typically a worldly international traveler and we had an extremely special trip to Spain with our son last June.  But when this opportunity arose, I could not pass it up!

So off I flew on August 15th, two days after I sent my son and his Dad back to Vandy for his second year at that venerable institution.  Travel time was twenty hours and I arrived in Beijing around 9:30 at night, got to my hotel around 11:00.  I just stared out my window, waiting for things to happen.  You know, Chinese things.  Nothing.  Just a few random cars and bikes.  My own reflection in the glass.  I looked the same.

What followed? “Tourist” things, like tours of the Forbidden City, open to the public now for years actually and with over 9000 individual “palaces”; the Summer Palace, a gorgeous place known as the favorite home of the infamous Cixi, the Dragon Lady.  She was a concubine of an Emperor who grew to much power because she gave birth to his first son.  She was quite the conniving one – she even had one Emperor imprisoned and murdered and then chose the child who would end being the last Emperor of China. Saw the Temple of Heaven with a lovely park outside of it.  I smiled seeing the people in the park, gathering there to exercise, play games, sing, listen to music.   Visited Tiananmen Square.  What surprised me was that it was physically connected to the Forbidden City but again, my incredible source of vital information, my guide, informed me that Chairman Mao himself had been warned never to visit the Forbidden City – that it would be bad luck for him.  He never entered its gates.

Walked on the Great Wall of China.  Thousands of years old and still parts of it are in really good shape.  I had not realized that it would be on the top of a mountain, however.  My guide pointed out proudly, “There it is!”.  I looked over…. and then WAY up.  I gulped.  I mean way up!  I am afraid of heights.  Can’t look over a railing from two stories up. 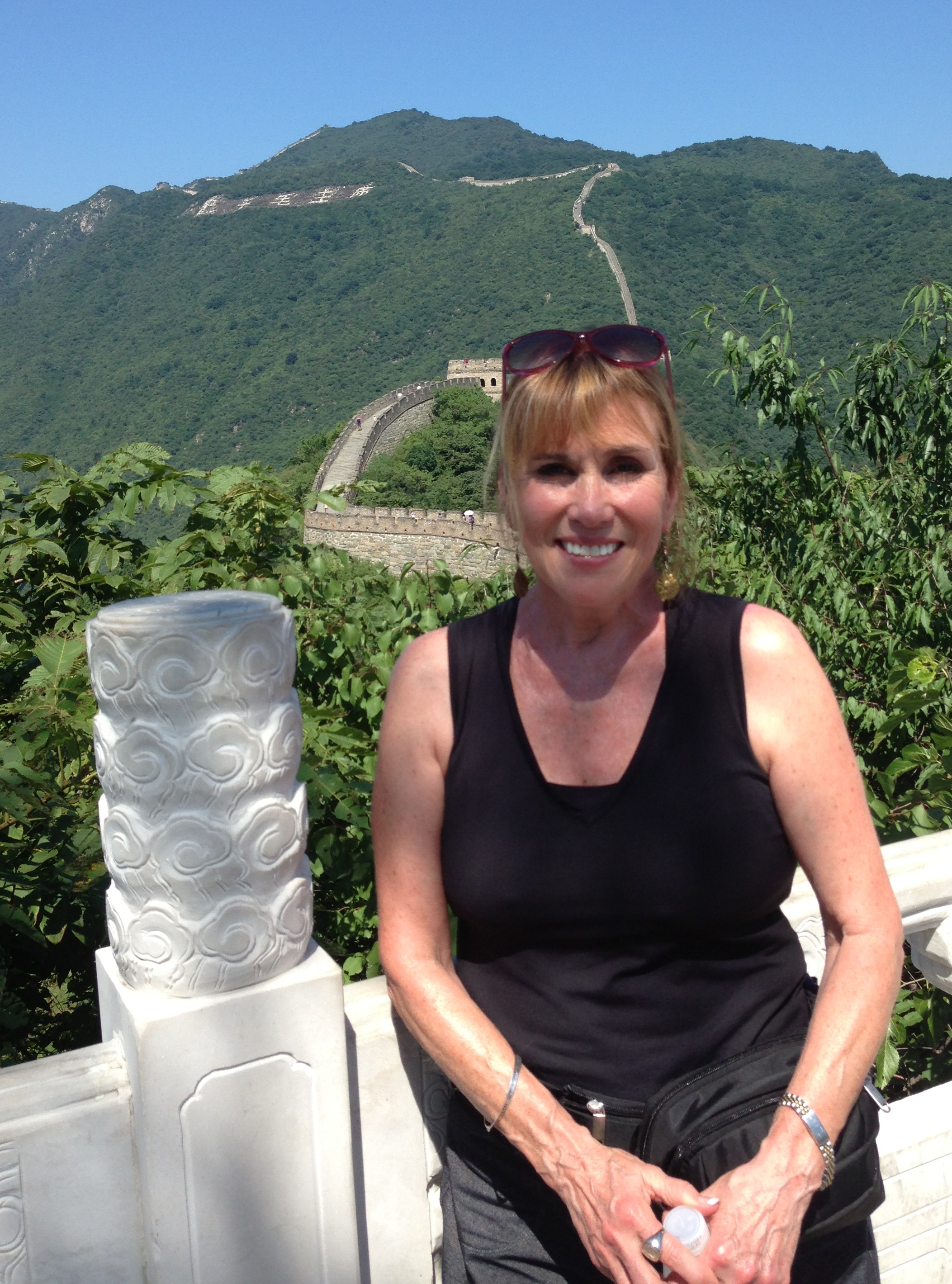 Well, I managed.  I just didn’t look down.  I looked out.  Always out.  I was not going to chicken out.   It was the Great Wall after all.

Broiled chicken feet in the outdoor market! Hungry anyone? They also had dried bull’s testicles for the really brave!!!

Speaking of chickens, I did obviously experience lots of  “Chinese” things.  First food, one of my favorite subjects.  And it was delicious!  I thought I ate lots of pasta here at home.  Noodles everywhere!  Tibetan noodles, rice noodles, square noodles, boxy noodles, fried noodles, dumplings.  Rice is eaten mostly in southern China it turns out.  Meat was pork, mutton, yak, beef.  Fish was offered but I was a little squeamish due to the pollution in the water.  Lots of gorgeous vegetables – bok choi, green beans, broccoli, cauliflower, snow peas, and greens I had never seen.  Then some weird organs that I didn’t try but interesting to see on the menus.  Chinese eat all of the animal, from the tongue to the stomach.  I took one bite of a boiled chicken foot for breakfast one morning- yes I did!  I swear I did!  They were looking at me on the breakfast platter, all these splayed out little feet, and I thought, “Okay, when am I going to get another chance to try to eat a chicken’s foot?”  Do you actually call it a foot?  Is it a claw or what?  But I spat it out.   It tasted like eating a wire encased by a cold flavorless Vienna sausage.  Couldn’t do it. 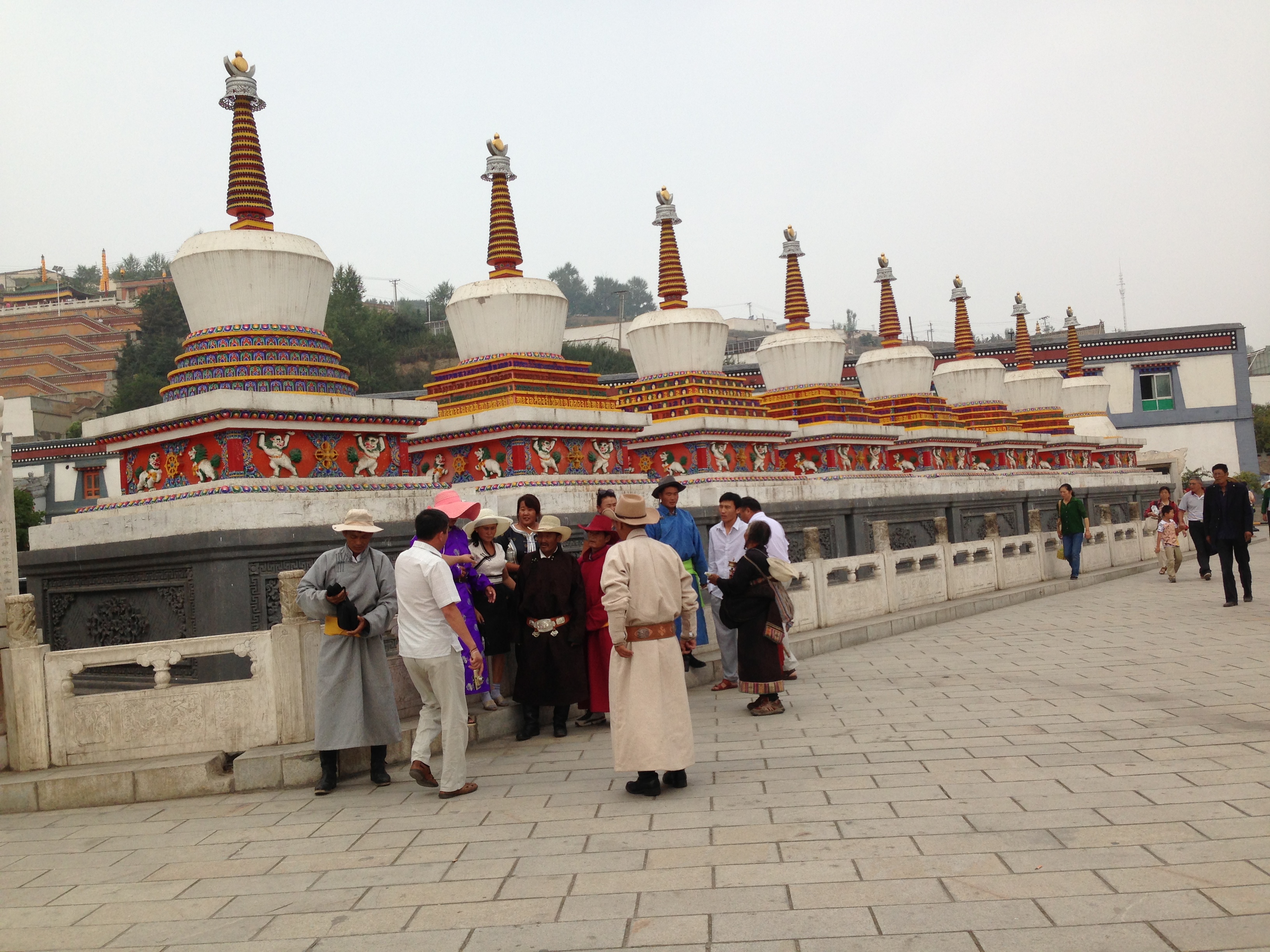 In English, these are called “stupas” – burial sites for honored lamas in the Buddhist faith found at Kumbum

William and Christie at Qinghai Monastery

The time spent with my niece Christie and nephew William was priceless.  Not just for the experiences we had together, but simply for getting to know both of them better.  The wonder the Chinese had for seeing this young blonde American woman speaking fluent Chinese (and also Tibetan it turns out!) was fun to watch and I so respect her for immersing herself in another culture.   We traveled to a Tibetan monastery named Kumbum, seeing Tibetan pilgrims who had traveled miles to practice “kora” there, meaning to walk around the monastery and prostrate themselves in order to earn karma.  Others did prostrations in front of a likeness of Buddha.  You could feel and see the immense faith of these people in their practice, although surrounded by somewhat bothersome tourists.  Gorgeous temples. 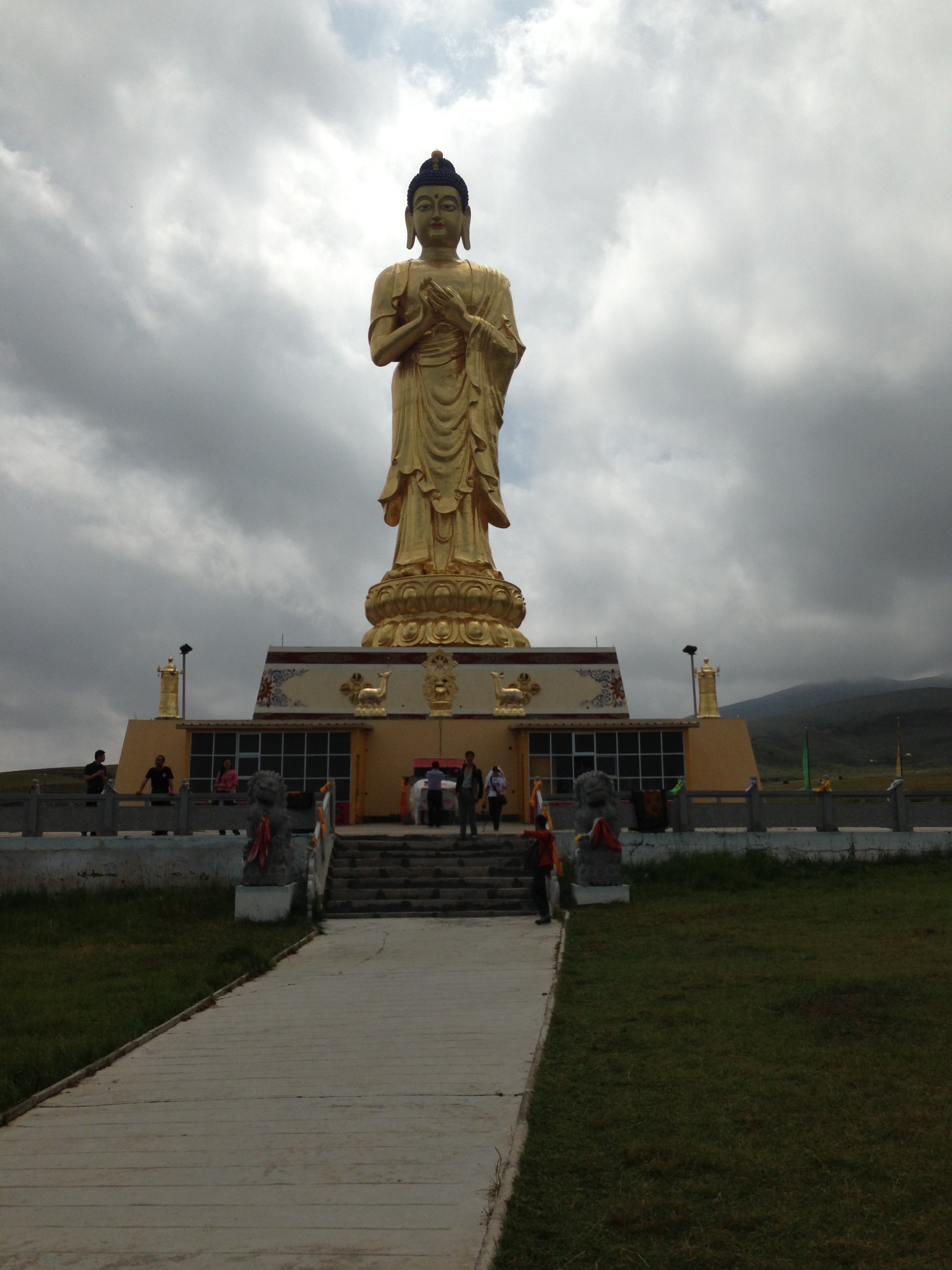 The New Buddha (Buddha that will come) that was found at the monastery at Quinhai Lake.

We also traveled to Qinghai Lake, an immense salt lake, and another Tibetan monastery where we were met by the patriarch of a nomad family who took us on a very bumpy ride to his tent, on lands where he, his wife and children tend 700 sheep and 300 yak.  We shared a beautiful meal of bread and butter, rice and yak yogurt,  all food made by her (it was a Holy Day so meat was not served).  I sang an old folk song for them; he a Tibetan welcome song for us.   We walked the land and talked through Christie a bit, mostly about our ages, jobs, families, children;  Christie had much to catch up with them about, as she had lived with them two years ago.  It was an unforgettable afternoon, and one that I will treasure all my life.

The mother and her two children out in the fields

The crazy thing for an American in China is the traffic.  There are no rules – the lines on the road mean nothing.  Absolutely nothing.  If a car is coming toward you, and you want to pass the car in front of you, you just go in between!  And “the shoulder”?  Oh no, that doesn’t exist.  That’s just more road to use as you might like!  It’s “who gets there first” really.  And people basically treat each other the same way.  Lots of pushing and shoving.  I had been told this by others who had travelled there, so was a little prepared.  It’s not considered rude there really.  It’s just the way it is.  There are a lot of people trying to manage and the “order” that we like to do things in is just not considered.  So there.  Welcome to China.

So I am back.  I didn’t quite realize how much of an adrenaline rush I was on until I got back home, and completely deflated.  Have talked to my son Rob once and he sounds great. Happy as a clam.  Shopped for two at the grocery store and was aware of a little sting of ache, quickly followed by the memory of how bad I felt last year, and a choice to not go there.  I simply to do not want to feel that level of grief again.  I can walk by his room now without feeling like I need to hurry past or go in.

His room is waiting for him.  And all our lives are going on.