We are traveling in the region of Andalucia, the southern part of Spain, supposedly the most beautiful because of the rich mixture of cultural heritages.

That’s Spanish for  “the laptop is on top of the chair” .  It’s one of the first phrases I have learned through Rosetta Stone.  So okay.  I have been trying to learn Spanish in the last week.  I realize that’s a bit silly, but I was a French major and I figured I could learn a little by the time we leave on a fabulous trip to  Spain next week.  What I want to know –  Why is  Rosetta Stone teaching me how to talk about the location of my laptop when I am going to need to know more basic things?  To their credit, I already know the verbs for eating, reading, swimming, sleeping, and drinking, but not how to say I want to buy something or order food or ask directions!  Hello and good-bye have been covered.  How to say my name and country.  Me llamo Margarita.  Yo soy de los Estados Unidos.  I have five more days.  Maybe ordering and other tourist-y things will be on there.  Like how to buy a pair of cheap sunglasses since I always lose mine.  Lost.  I definitely need to know the word for lost, for more reasons than one.

We are so excited.  Our son Rob has been there for three weeks now studying (?) in a town named Alicante on the Mediterranean coast.  I don’t know if I am more excited to see Spain or to see Rob in Spain or just to see Rob.  Probably all of those in reverse order.  We will travel for a little more than a week and then come home, where Rob will start an internship/job working six or seven days a week, ten hours a day, helping to retool a chicken factory.  From the sublime to the not so sublime for him.  It will be like he’s not home I am afraid, except I will be feeding him and his stuff will be all over the house.  That’s fine with me by the way.  No complaints unless I can’t walk through the den again.  Then we may need to talk.

His trip to Spain has certainly tested just how much “let-go-ness” I have achieved.  Tried to not worry too much about his newly glued lung as he flew over the ocean.  I just prayed there was a doctor on board.  Have attempted to look at all the fantastic pictures he has posted on Facebook with friendly interest rather than too much motherly concern.  I was doing great until the one below, where he is perched way too close for my comfort on some rocky precipice overlooking the Mediterranean.   This was too much!   I wanted to take away his cell phone and tell him he was grounded for a second or two.   And he must know that picture freaked me out.  I have a tremendous fear of heights.  Can’t even look out a second story window straight down.  Now, he just e-mailed me that he and twelve of his closest friends got stuck in an elevator in Barcelona for an hour.  Called it “interesting/scary”.  Thinking of him getting stuck in a some rickety elevator I don’t know how many stories up?  Just not going there. 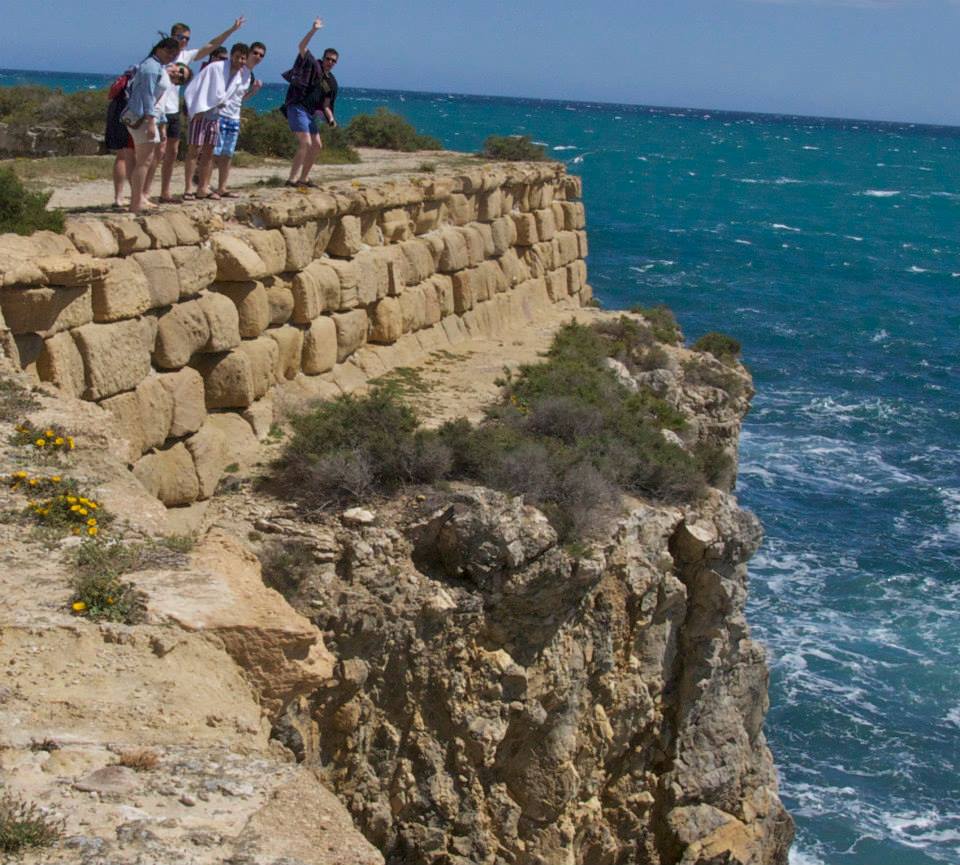 Maybe not right on the edge but close enough for me… that’s him in the black, arms waving wildly!

We all three travel fairly well together.  Have always had a “saying” on vacation.   Guess all families have “sayings”.  Ours is, “It’s everybody’s vacation”.  That means we all do a few things we don’t really want to because one of us wants to. Everyone gets a turn to pick.   They stand and feign interest in scarves and earrings.   I go to a hockey game where everybody goes nuts if just one point is scored.  Thank goodness we all love eating and new foods!   Of course we get on each other’s nerves and have to be away from each other some, don’t get me wrong.  It will be interesting to see how my husband and I handle not being able to understand the language.  Thank goodness I will be able to speak fluently about my laptop.

It has been a little strange to think of Rob’s homecoming.  My husband and I have gotten accustomed to putzing around by ourselves.  I have enjoyed my freedom and haven’t worn a robe around the house in months.  But cover up I will!!   Then there is the anticipation of having to let go of him again in the late summer.   Of getting accustomed to hearing his laugh or him playing guitar,  really good talks, or whatever, and then, poof!  Off he will go.  But I am not going to let that scare me.  Surely it can’t hurt worse than the first time.

We went to the memorial service of one of my son’s high school friends this past week.  A young man named Solomon.  His death occurred through one of those incomprehensible accidental tragedies that is so hard to believe that you just keep saying it over and over, shaking your head.  How could this have happened?  Solomon was nineteen, a gifted musician and an extremely warm-hearted, giving and loving person to all.   Several people said that he was always the last to stop sharing a hug.  I met him as a young child, but more recently knew him only to chat a bit as he visited our home a couple of times in high school.  We heard his band play because Rob’s best friend played in it as well.  Watching his close friends and family celebrate his life and struggle courageously with his death was both tremendously moving and humbling.  The simple gratitude of my own child being safe, but the simultaneous gut-wrenching empathy for those who will be suffering for such a long time because of the intensity of their caring – both those feelings are real.  When you love deeply, you can be hurt deeply.  It’s the terrific risk you take.

I wish I had known Solomon better.  It sounds like he was someone very special.

Perspective.  I can’t wait to give my own grown child a hug.  One that may just last a little longer than normal.