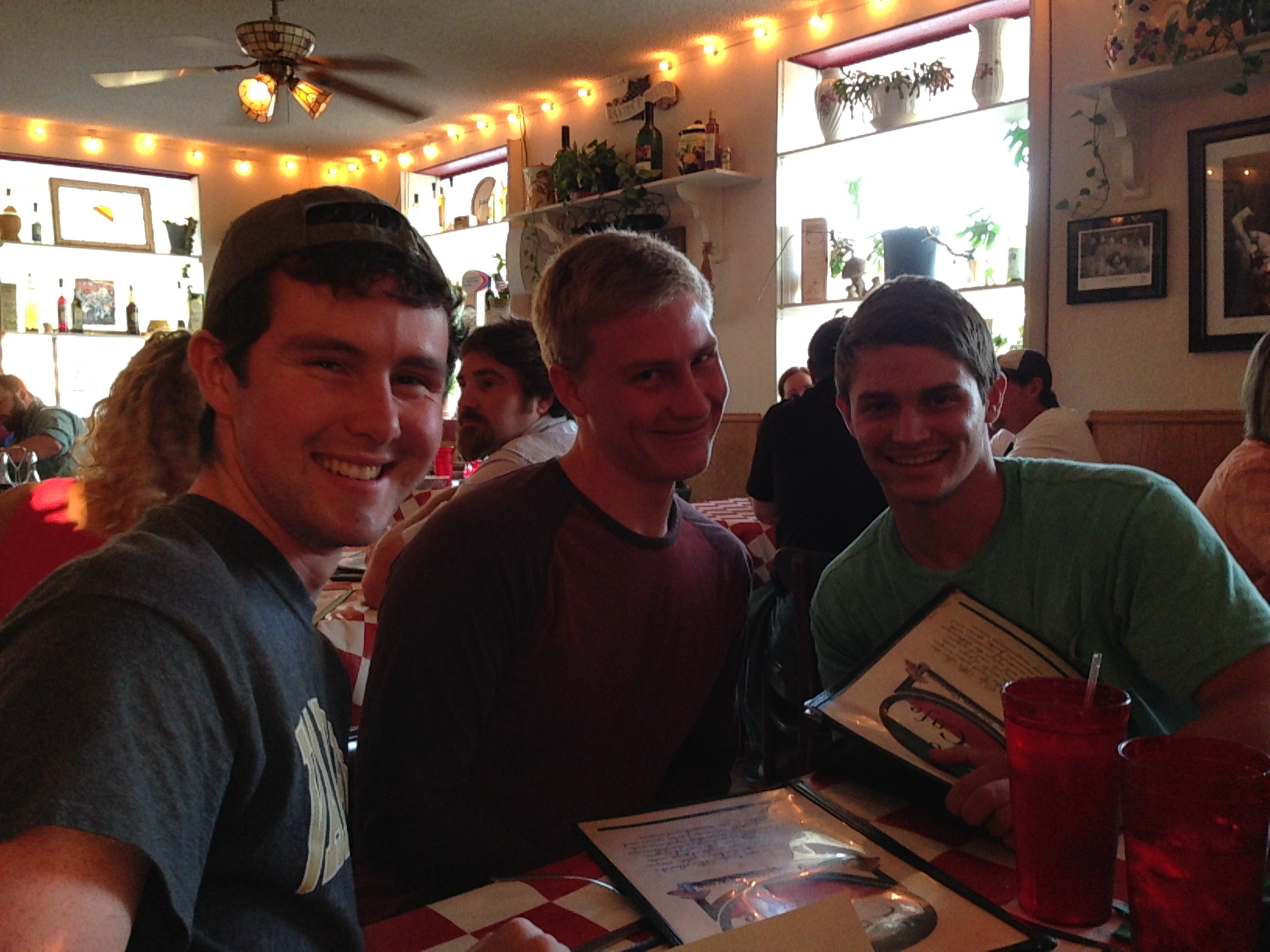 It’s been a cool week.   Was my son’s 19th birthday on the 2nd of July and although all of us worked that day, we got together with his two best friends and their parents for a celebration at a local Italian place.  My son worked in a sandwich shop last summer.  So he is working at the same place and has been promoted from dishwasher to cash register.  It’s pretty cool.  The same pay (not so cool), but he is finding out about real life.  Finally got a decent picture of all three friends- usually one of them does something incredibly adolescent and ruins the picture but this time, all three of them actually behaved.

Nineteen.  Seems a lot older than eighteen somehow.  And he has changed a lot, so maybe that’s what “the older” is really about.  And he is working out like crazy, drinking a quart or more of milk a day afterwards.  Supposedly that’s the trick.  I must say he is filling out ,so it’s working.

Now it’s the evening of July 4th.  I hear fireworks going off everywhere.  Our dog is a little weirded out.  This is the day we brought our son home 19 years ago – the memories seem both fresh and far away.  “You are letting us take this little thing home?”, which quite to our astonishment they did.  I had had a C-section so was in the hospital for a couple of nights.  They had been bringing our little bundle of joy to our room so I could breastfeed and we could bond.  They rolled him in to my hospital room on a cart with stuff underneath that we didn’t pay much attention to… hospital stuff, we supposed.  Our eyes were only on our precious bundle.  An hour before our departure, the nurse came in and said, “You can take the diapers you haven’t used, you know.  You have paid for them”, giggling somewhat.  My husband and I stared at each other, aghast.  Diapers?  We were supposed to be changing his diapers?  Nobody had told us that?  Nobody had showed us that!!!!  We were in BIG TROUBLE.

I will tell you my most incredible memory, as far as patriotism goes.  My college choir traveled to Romania when it was a Communist country in 1976.  We were there about three weeks and traveled all over the country by bus.  We would sing only in places allowed; the guy who was our tour guide, Adrian, became quite a good friend of mine and he shared with me just how closely we were watched and how carefully planned our trip was.  For example, we were allowed one night to stay in a “typical Romanian home”.  Well, there wasn’t anything typical about it.  It was much nicer, neater.  In other cities, people snuck up the back stairs to our rooms in the hotel just to speak to real Americans, to find out about the Free World, and they were in danger for doing so.   I had a bit of an advantage because French was the second language in Romania at that time and so I could ask questions of people, but the answers were often carefully given.

I will never forget that experience, after hearing stories of people feeling controlled and helpless.   That morning of July 4th, 1976, we gathered in the lobby of our hotel and sang our National Anthem.  “Oh Say Can You See”.  We all had tears in our eyes.   I will never ever forget it.  Freedom is simply not a thing to take for granted.

The other cool thing about this week is that we remembered to honor tradition.  My husband  put our July 4th decorations up for the first time in several years, and they are so great!  I had forgotten how much I love them.  Somehow when our kid got older we didn’t do it anymore, like it was childish or not worth the effort.  Heck no!  It was so much fun to get them out!  Our house is full of flags and little patriotic figures with striped pants with stars and silly looking hats – all kind of trashy Americana July 4th stuff!  Just love it!  Our son was completely opposed to the idea, but you know what, he doesn’t live here anymore!!!  One of the perks of empty nest I guess; he doesn’t get a vote. (And I think he liked it a little more than he let on…).