Three Steps in Learning to Respond – Not React 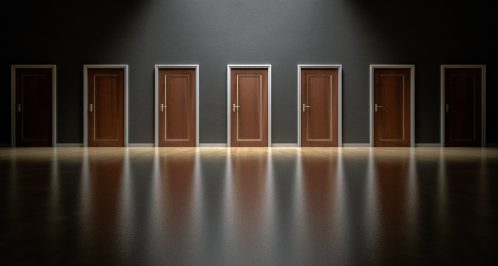 As the pandemic continues, perhaps you’re sheltering in place with family and finding that communications with others are breaking down more easily. Or perhaps you’re feeling that your emotions are a bit more difficult to contain. If so, this post is for you.

There’s a simple mantra out there that can really help with self-control, especially emotional self-control – “Respond not react.”

It’s not. Learning how to control your reactions to what’s being said or done around you can be difficult. Our culture is dominated by people who are constantly reacting to one another. Whether it’s Twitter, Jerry Springer, or The Real Wives of Some City, it’s everywhere. Often these over-reactions feel totally justified completely. “The rest of you dumb asses need to wake up.” “This makes me furious and you’re incredibly stupid.” “You’re a big f…ing liar!”

Anger stems from your values being threatened. And we each have values that are important to us, and we’re ready to stand up for them, even fight for them.

It’s the level or intensity of the reaction — the impulsivity involved  — the non-thought-out, way-over-the-top immediate reaction that can be dangerous.

Self-control is about learning how to filter, to manage your emotional reactions so that they become decisive responses to whatever is threatening you, disappointing you, or just making you feel like you’re going crazy. Basically, you keep your mind hooked up to what your heart is feeling. And you respond, not react.

What your value system has to do with self-control…

Stephen Covey, in “The 7 Habits of Highly Effective People” said: “The ability to subordinate an impulse to a value is the essence of the proactive person.” So what does this mean? Proactive people, people who are doing something about problems that are around them, don’t act on impulse. They act on their values. They don’t let impulses guide their behavior.

Years ago, a middle-aged couple came to my office for an initial visit. Let’s call them Jimmy and Rhonda. My first office was tiny — three people was a bit of a squeeze. So it was cosy, to say the least. I opened the session in my normal way, asking, “What brings you to therapy and how are you hoping I can help?”

There was silence. And then she looked at me. “I’m planning to move out this weekend. I want a separation. I’m miserable in this marriage.”

“You’ve waited until we’re in front of a stranger to tell me this? Why couldn’t you tell me at home? What do you expect me to do? You’ve had an affair, haven’t you? ”

He looked as if he was about to bolt.

I stepped in and asked a few questions. How long had they been together? Did she know what was causing her unhappiness? It certainly sounded as if he was flummoxed by this move, and I gave both support for what was a very painful moment in their lives.

They’d been together for over twenty years. But the relationship started when they both were unhappily married to others, and they’d had an affair. There were two kids, one in college and one a senior in high school. She’d been a stay-at-home-mom and he worked in a huge corporation, having done very well financially.

“We’ve grown apart. He’s so wrapped up in his work. I want to get a job and feel like I have choices of my own.”

It was a story I’ve heard a lot over the years — two people who’d both done what they believed they should, worked hard, raised their kids, but forgotten to nurture their own relationship. They’d likely never addressed problems with trust that arise when a marriage starts out with an affair. Whatever the reason, the pain was palpable in the room.

Jimmy glared at me, and still fuming, said, “Well, she’s taken all the control. I don’t have a choice.”

I waited a second but fairly quickly responded. “Of course, it feels like that to you, Jimmy. But what do you want more than anything? Because you actually have lots of choices. You could leave, slamming the door behind you, and head to the meanest divorce lawyer you can find. You can contact your children and tell them how their mother’s abandoning your marriage. You can let your anger and hurt be in control, and try to hurt Rhonda back. Or… you can hear what she’s saying and see where it goes.” 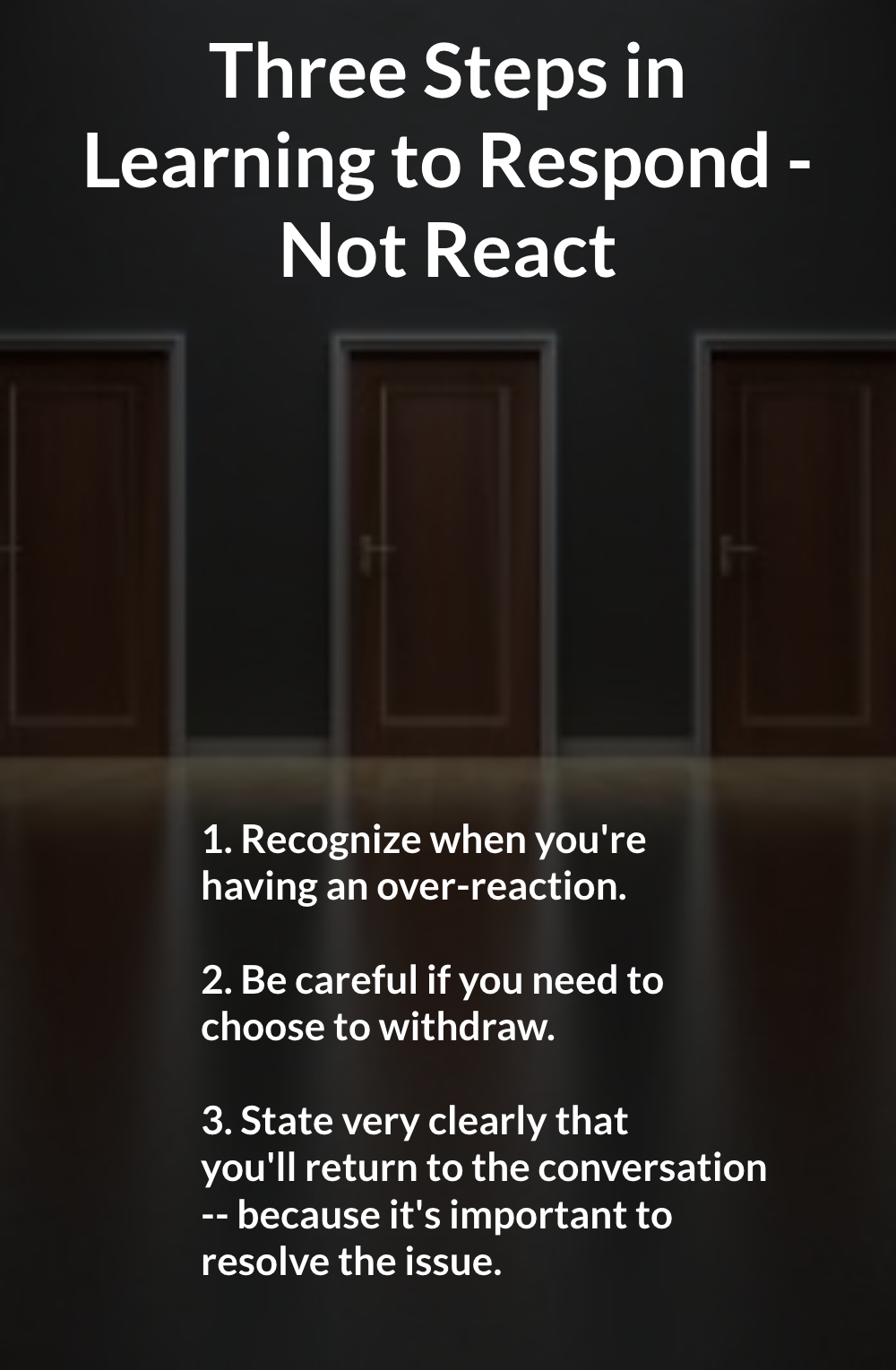 He could respond, not react. He could decide what value was more important to him than flying off the handle.

How do you respond when someone suddenly pulls in front of you when you’re driving? Do you get enraged? Or do you remind yourself that you’ve done that unintentionally as well, after you changed your mind about the best way to get somewhere? What’s more important to you — having a chance to get angry, or being understanding? What do you value more?

Three things that lead to self-control…

1. Recognize when you’re having an over-reaction.

Stop and ask yourself, “Wait. Is my reaction too intense? Is it rational?” The very act of stopping your emotions and questioning their validity can offer you the few seconds you need to realize you’re over-reacting.

2. Be careful if you need to choose to withdraw.

You may need to leave a conversation in order to pull yourself together. You can reveal that you’re having an over-reaction — and that you don’t want to — and state you need time to think things over.

“I can feel myself getting angry about this, and I want to try to understand. I’m going to take a break and cool off. But I want to get back to this, because it’s important we be able to talk about it.”

3. State very clearly that you’ll return to the conversation — because it’s important to resolve the issue.

This is very important — the message that you will be back. Withdrawal can feel very controlling. If you disappear, go into another room, leave the house or immerse yourself in a video game, that can feel terrible to the other person. Saying you want to continue the conversation is a must.

“I’ll be back in an hour. And we’ll continue to talk.” Or, “Let’s pick this conversation back up in the morning, when we’re both not so tired.”

By the way, what happened with Jimmy and Rhonda?  He made the decision that he cared more about the marriage than he did his pride. He calmed down, He sat and listened. When they came back the next week, he’d helped her move out. They’d talked to their children together.  He joined a men’s group and started exercising. She was gone around six months. And when therapy stopped, she’d been back in their home for around three months.

Good things can happen when you think — when you monitor and manage your emotional reactions. And when what you value the most remains your top priority.