How Maya Angelou Touched My Life. My Gratitude Always. 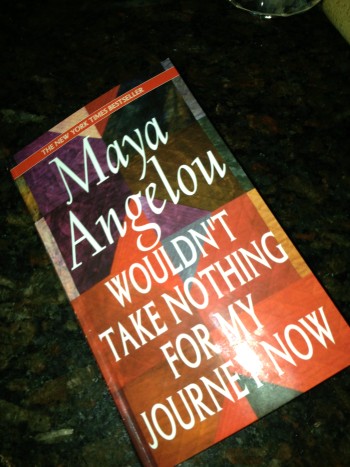 Maya Angelou spoke at Bill Clinton’s Inauguration in 1993 as Poet Laureate.  There was just something about this soft-spoken woman woman that riveted me to the TV screen.

I  knew her voice was going to be important for me.

I went several weeks later to Barnes and Noble to find one of her books.  I had just finished graduate school in psychology, completing my dissertation.  I wanted to read a book about as much as I wanted to throw myself in front of a truck.  So I looked for one by Dr. Angelou.  I picked the smallest one.   139 pages.   “Wouldn’t Take Nothing For My Journey Now”.  I didn’t know if it was considered one of her best.

After reading it, I have never been able to forget it.  This simple collection of essays turned on lights for me.

The many essays were beautifully written.   Brief.  To the point.  Elegant.  One on curtailing your own style if it embarrasses your emerging teenage child.  Just out of love for him or her.   One on stopping someone before they said something to you that, “might hurt your feelings” or “make you mad’.  “Well, then, tell them not to say it“, would be Maya Angelou’s point.

She described it far more eloquently than I just did.

Most profound was one where she told the story of herself at a nightclub.  She was alone.  Very lonely.  Ironically, had just won “Person of the Week” from the New York Post.  Was being congratulated from those all around.  She had way too much to drink and, in her own words, “… I began a performance which now, more than twenty years later, can still cause me to seriously consider changing my name and my country of residence”.

What followed in the story, although fascinating, was not as important as those words to me.  Here was this amazing woman from Stamps, Arkansas, baring her heart and soul to a nation.  Allowing herself to be seen as who she really was.

Both wise guide and at times, intense seeker.

Why is this important?  How many people have I talked to in twenty-five years now that feel like someone, one of these days, is going to find them out.  That they are not really who they are chalked up to be.   They shouldn’t really be in the position they have.   That’s because they are not doing what Maya Angelou is showing us.  To accept that we are both our successes and our mistakes.

The power of her voice at that moment for me was her display of self-acceptance, although still tinged with whimsical regret.

I knew exactly what she meant when she said those words about wanting to disappear from existence because of her performance.  I had had many of those moments.  Things I would never feel I could share with anyone.

Maya Angelou had put them in a book.   That is what struck me that day.  I realize lots of folks had done it.   Her doing it that day struck me.

Her voice led me.

Hence the next twenty years.  A private practice in psychology.  Raising a son.  Having a happy marriage.  Now blogging about it all!

In the first essay “In All Ways A Woman”, Dr. Angelou writes, “… (women) must be tough, tender, laugh as much as possible, and live long lives.  The struggle for equality continues unabated, and the woman warrior who is armed with wit and courage will be among the first to celebrate victory”.  These qualities, when coupled with self-acceptance and value, are ones I strive for and are where I want my mind, heart and soul to live.

So thank you Maya Angelou.  I wouldn’t take nothing for the journey.

I wrote this post initially, in a somewhat longer form, for Arkansas Women Bloggers a year ago for their series on Women You Admire.  I post it today in honor of Dr. Angelou.  And to thank her again.