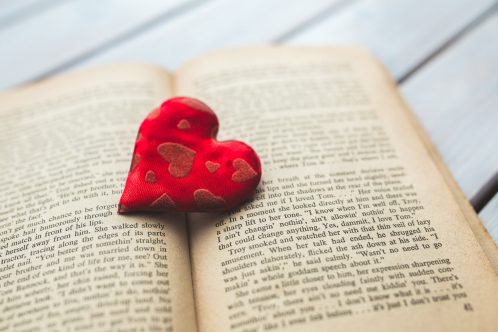 After a bad break-up or a divorce and your relationship is over, you often look back and wonder, “What was I thinking? How did I not see this coming? How did I ever think this was going to work out well?”

It’s true, of course, that hindsight is 20-20. But what causes you to miss things while they are happening that in retrospect became a nightmare?

You didn’t give it enough time. Or if you did, you made up your own story — your own fairly tale of how things would turn out.

You told yourself it was okay that the new love of your life was in superdrive at work and bent on becoming vice president of their company. You loved their drive and were thrilled for them to achieve. Her other ex’s felt intimidated — at least that’s what they give as the major reason that “things didn’t work out.”  It was going to be great.

Or… it wasn’t a big deal that they and their ex were still emotionally battling with one another and could barely be civil. You decided the ex was completely at fault and backed your new partner’s point of view totally. You didn’t like the fighting, but they said that they’d tried nice and nice didn’t work…

Or… they loved spending time with high school friends and invited them over all the time. There was always a lot of drinking and a good time to be had. You noticed that it was pretty constant, but you were sure they’d settle down once you were a family.

You took information in — but through the eyes filled with “lust/love,” you only saw what you wanted to see.

And then, you began to weave a story, a fairy tale basically, of how things will be. What will happen next and how it will be just so wonderful. You envision happiness and contentedness and fulfillment. The things in real life that you’re a little uncomfortable with? They will change for the better, “I just know it.” Those concerns are pushed aside and so instead of taking time, instead of waiting to see what knowing someone for a year or two will be like, instead of moving slowly toward an increased commitment, instead of listening to see if your soon-to-be partner takes responsibility for their own actions, you joyfully dive in.

It’s great… at first. “Everything’s going to work out,” the little voice inside your head starts chanting. Maybe you get married and start to weave your lives together. Or you make decisions that change your own life, because it seems important for the relationship. You move to be with them, or you don’t see your own friends much anymore. Your life revolves around making the relationship work.

But, over time, the patterns that you intentionally made cloudy become much more clear, despite your best attempts to keep them hidden.

And the fairy tale can become a nightmare…

There really are no fairy tales. There’s excitement. And joy. And laughter. And contentment. And the relief from loneliness. But those things can get lost with the invasion of disappointment and despair, anger and bitterness, blame or contempt — brought on by the issues you chose to ignore. And those things matter now — now that you’re very personally and intimately intertwined in each other’s lives.

You still appreciate their drive, but even on the weekends when the two of you have both sets of kids, your partner’s working. You begin to feel like the unpaid babysitter, not a spouse.

Not only do they still fight with the ex, they won’t compromise with you. What seemed like decisiveness at first seems like bossy-ness and refusing to be cooperative now.

You’re moving toward wanting a child, and creating more of an adult life. They, on the other hand, seem to need the constant stimulation of friends. And drinking has becoming a huge issue between you.

The author Daphne Kingma in her book, Coming Apart, points out that there’s at least one thing you can generally pinpoint when you look back at a failed relationship — one thing that you ignored, denied, or avoided that’s at the root of what you now see as an intolerable obstacle to remaining in the relationship.

How to avoid creating a fairy tale…

How can you avoid this kind of mistake? 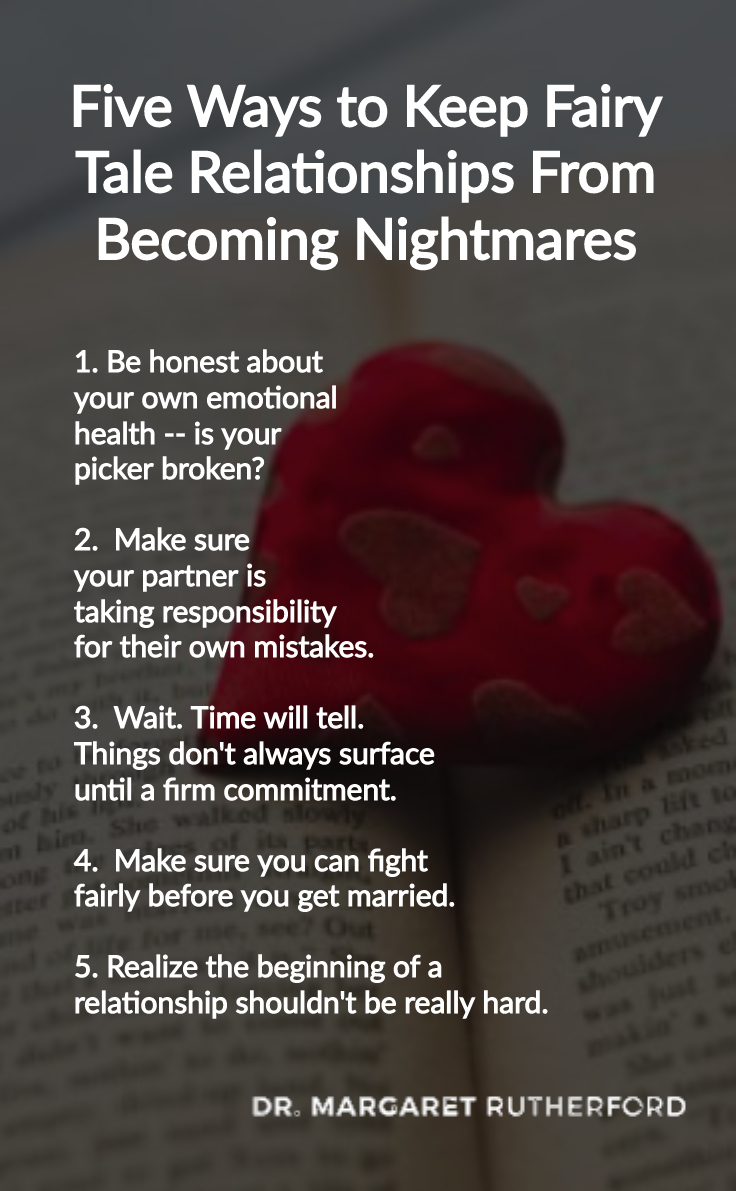 1) Be honest about your own emotional health — is your picker broken?

Look at your own patterns and admit your part. Are you creating fairy tales? Are you looking for the magic person who’ll save you or sweep you into their arms? Are you attracted to edgy — people who aren’t growing up or are demanding and self-centered. Maybe you’re allowing a sexual connection to make your decisions for you. Maybe you’re way too urgent about finding a relationship and that urgency is clouding your judgment. It could be many things, but looking at yourself in the mirror and being honest can go a long way.

2) Make sure your partner is taking responsibility for their own mistakes.

A blamer stays a blamer. If they talk about the ex’s being intimidated, and doesn’t say anything about how they also screwed up, that’s not a good sign. It’s rare that all the fault is on one side in a failed relationship. Look for how someone reveals their own vulnerability — their own struggles, and you can be much more reassured that that’s how they’ll act in your own relationship.

Plain and simple. Time will tell you a lot about someone. We all have unconscious ideas about marriage and partnership. We absorbed them when we were children, and watched our parents try to have a relationship. Often, they don’t come to the fore until a commitment is real. It takes time to figure out if you’re making assumptions or having expectations about being in a committed relationship that aren’t obvious on the surface.

4) Make sure you can fight fairly before you get married.

If you’re fighting tooth and nail, or not fighting at all, before you’re committed or married, then something’s amiss. Arguments are natural, and resolution is vital to true intimacy. So, make sure you both can do it, be honest with each other without being cruel, not hold a grudge, and get on with living.

5) Realize the beginning of a relationship shouldn’t be really hard.

Unless there’s some kind of extenuating circumstance, like one of you becomes ill or has a sudden loss, then the beginning months of a relationship should be fairly smooth. You’re learning about each other, and you’re fascinated often to do so. If you’re arguing a lot, or it simply seems like you’re spending a vast amount of energy on the relationship, then something’s out of balance. Most folks are on their best behavior when falling in love. And, if this is the best, and it’s really hard, then you ought to consider the relationship more carefully.