Five Reasons We Talk “At” Each Other And How To Listen 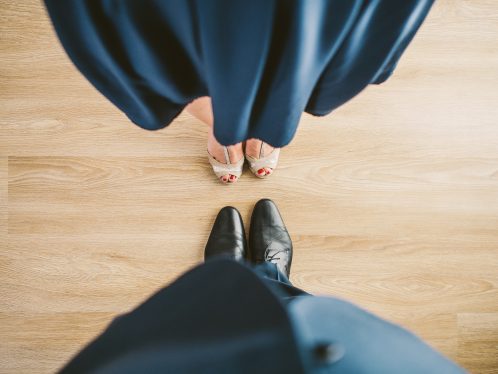 When couples walk in my door, saying, “We can’t communicate,” one of the things I immediately wonder is whether anyone is truly listening.

With so many of us remaining in various degrees of social distancing, we’re spending more time with those with whom we live than we potentially ever did before. This means that communicating well with each other is more important than ever – where actual listening is going on.

A couple comes to see me, with their chief complaint being, “We can’t communicate.”

What do I immediately start to wonder? “Is either one really listening… or are they talking ‘at’ each other? ”

But it doesn’t have to be that way.

The following is a true story that offers a vital lesson in how to actually listen and grow together in a way where both of you learn and deeply understand one another.

Jim and Rebecca were attending a group workshop, where they were learning a specific technique of listening. The exercise was designed carefully: one partner talked while the partner listened. The rules or goals for the talking partner were simple:  Keep to one topic, and try to travel deeper into their feelings. The goal for the listening partner was to keep their own agenda (ego) out of the way, and try to learn something they didn’t know.

It’s much harder than it sounds, especially getting rid of your own agenda when you’re listening. Questions like, “What do you want me to do about that?” Or “How do you think that affects me and the kids?” are strictly not allowed.

If you have trouble imagining this, think for a moment about the questions you asked when you were first dating — when you couldn’t wait to discover who this person you were falling in love with really was. How did he get the way he was? How did her mind work?

Now back to the workshop. Each couple took a turn practicing the technique in front of the other couples, who would listen and then giving support afterwards.

“No, I can’t. I don’t think I can say what I’ve been feeling. You won’t understand.”

“I promise, you can. I have watched others. I get this.” The room settled in to listen.

“Okay.” Rebecca took a long breath. “I often wish for your death.“

The room became very still. A couple of tense seconds ticked by. Jim then asked, “How long have you felt that way?” And Rebecca started crying.

She revealed she’d felt utterly hopeless about their marriage. She’d tried everything. Her fantasies about his death didn’t mean she truly wanted him to die, but that she was horribly demoralized and desperate.

Jim absorbed all that she’d said. He listened. And he got it.

The next day, the couple came into the room, laughing. When asked what the joke was, Rebecca said, “We were walking on the sidewalk and Jim was on the street side. A huge tractor-trailor came rolling past. He turned to me, with a wry smile on his face, ‘Now’s your chance.’“

What makes you stop listening… and what you can do about it....

1) It’s easy to assume you know what your partner is going to say. Instead stay curious.

After all, you’ve been together for years, and we can get repetitive with one another. But maybe, just maybe, you don’t know what they’re thinking. Instead, you can realize that you spend eight to twelve hours away from this person every day. They’re having experiences that you’re not aware of at all. People grow and evolve and they might not be as predictable as you think. Perhaps it would be interesting to stay curious about the life of your partner; they might surprise you.

2) You’re thinking about what you’re going to say, and can barely wait for them to stop talking.  Instead, stay in the moment.

You can be so busy formulating a response, or something that will prove them wrong, especially if you feel criticized. Rather than thinking of “your turn,” try to stay in the moment and actually listen to what they’re communicating to you. Then you have the ability to respond more spontaneously, and the conversation might actually lead somewhere fresh.

3) You’re responding to their “tone” rather than listening to their words. Instead, ask for another approach.

“As soon as she starts nagging, I shut her out.” 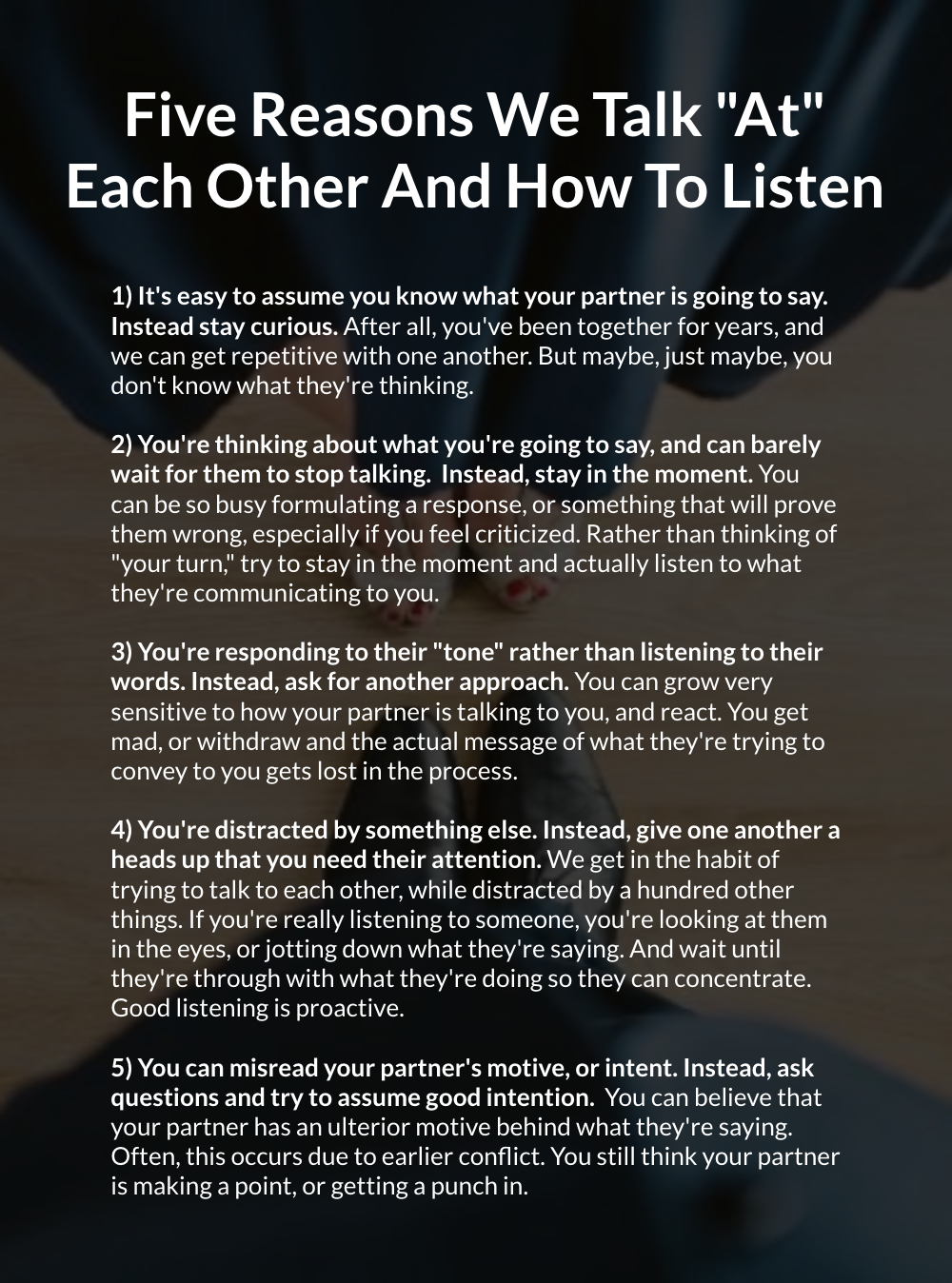 “I hear that condescending tone in his voice, and I just get mad. Who is he to talk to me that way?”

You can grow very sensitive to how your partner is talking to you, and react. You get mad, or withdraw and the actual message of what they’re trying to convey to you gets lost in the process. Instead say,  “I want to listen to you, but when you say it in the way you are, I tune out.” Hopefully, they’ll respond by changing their tone. The important message is, “I want to listen.”

4) You’re distracted by something else. Instead, give one another a heads up that you need their attention.

“Yes, I did. You were sitting, looking at the TV and doing something on your phone, but you answered me.”

“Well, I don’t remember that at all.”

We get in the habit of trying to talk to each other, while distracted by a hundred other things. If you’re really listening to someone, you’re looking at them in the eyes, or jotting down what they’re saying. And wait until they’re through with what they’re doing so they can concentrate. Good listening is proactive.

5) You can misread your partner’s motive, or intent. Instead, ask questions and try to assume good intention.

You can believe that your partner has an ulterior motive behind what they’re saying. Often, this occurs due to earlier conflict. You still think your partner is making a point, or getting a punch in. Let’s say you had a fight about who is doing the brunt of the work around the house. Feelings were aired on both sides, but the subject is still sensitive.

Then later he says, “Do you want me to pick up the kids today?“

She explodes, “Just because I was saying I’m tired, doesn’t mean I need you to do that!”

He’s moved on from the earlier conversation, but she hasn’t. She misreads his motivation or intent. Instead, ask questions but don’t assume. “Are you still mad?” for example.

Good listening simply takes practice. And more practice…. and even more practice.
You can hear more about mental health and many other topics by listening to my podcast, SelfWork with Dr. Margaret Rutherford. Subscribe to my website and receive one weekly newsletter including my weekly blog post and podcast! If you’d like to join my FaceBook closed group, then click here and answer the membership questions! Welcome!