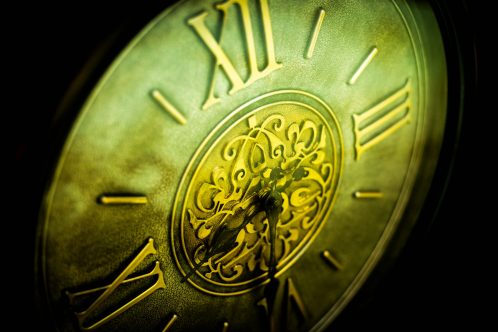 The summer of 2012. That’s when my only child left for college.

And that’s the year I began dealing with empty nest and letting go.

What a difference six years can make.

I’d almost forgotten this past week was the beginning of the school year. I was headed to work and in a hurry.  Much to my dismay at first, and then my delight, I was stuck in the long line of cars in front of an elementary school. Marching along the street was a colorful parade of entire families, marking that today was the day. It was time to go back to school.

Moms were pushing baby carriages. Dads were carrying tousled toddlers on their shoulders.Younger kids clasped the hands of their older brothers and sisters, dressed in not-a-spot-on-’em-outfits. Brightly-colored backpacks tightly fit onto their little bodies. Some smiled. Others stared down at their feet, perhaps overwhelmed. What looked like the occasional 5th grader, far too mature for all of this pomp and circumstance, walked way in front of the family he’d prefer not to claim. Even the family dog was along, wondering what this new morning ritual was and whether or not it involved food.

Six years of saying hello and goodbye — and letting go…

I vividly remember the hellos and goodbyes of each year my son went to college – and now the ones that are part of him living 1500 miles away.

Like when he was going into his sophomore year. He’d been home a mere two days between his summer job and leaving for college, but he didn’t need for us to drive with him back to school to unpack or fix up his room. “There’ll be guys there to help.”

He’d packed his car. Guitars. Golf clubs. Clothes thrown in wherever they would fit. Not exactly as neatly packed as his father would have done it –but it worked.

Pretty dern good job if I do say so myself.

We tightly hugged good-bye.  It may have been only two days, but the time had been fantastic. There were huge tears in my eyes as he drove away, although I brushed them away — trying to smile gayly with a jaunty wave.

But the now familiar dull ache crept into my soul.

That was the same year that at Christmas he announced that he wasn’t coming home for spring break. It was a banner year for me.

A few years of practice have made a difference. Letting go gets easier — or maybe just more familiar.

We parents love our kids. We watch them grow. We watch them change. We worry –hopefully not too much. We pray. We sweat out the hard stuff. We relish it all.

And if we’re fairly healthy and they launch pretty well, we let go.

It’s like living in a world that’s familiar — the part where you get her text and she’s saying the same goofy thing she always says or he only answers you after the fourth text you send. All that’s familiar. And then there’s the unfamiliar. Within a few months, she’s dyed her hair and decided she wants to change her major to engineering. He starts putting tomatoes on his salad and begins to learn how to rock climb.

Where has the son who detested tomatoes gone? What has happened to the daughter who wanted to teach elementary school?

Your child is becoming someone you don’t know quite as well as perhaps you did. Or thought you did. You can work to stay with the changes and try to understand your child’s new world — or you can get lost and not know your place. Or you can feel some mixture of the two.

Your child is transitioning — changing — just like you did. Remember? And letting go is part of your transition to a different definition of parenthood.

The consistency of time and the inevitability of change…

My grandparents had a gorgeous old Grandfather clock. I used to love to listen to and anticipate its deep resonant sound. 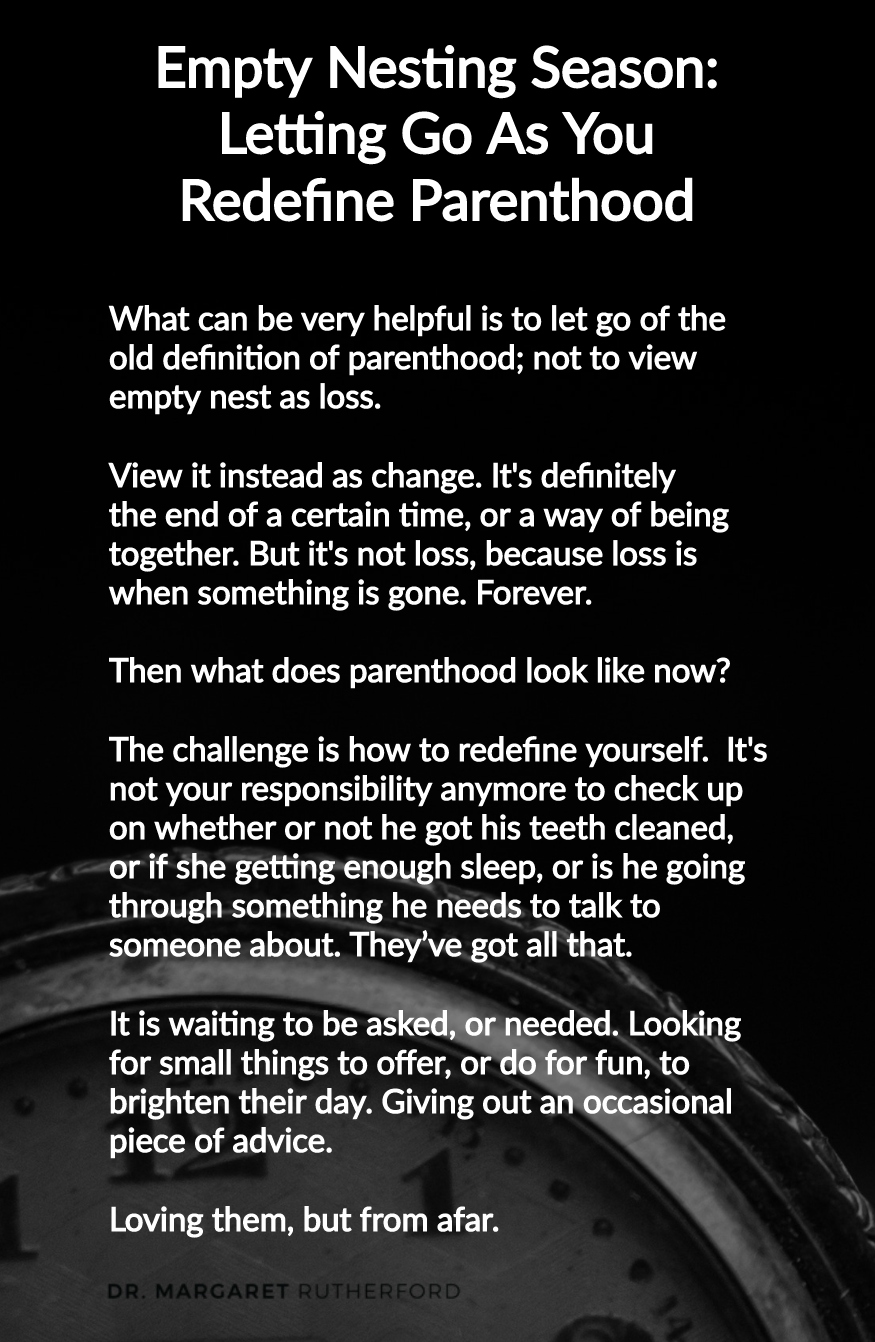 It was an inevitable, tangible reflection of time passing. Yet it was also comforting to know that each tick was consistent. Right there. Inevitable.

As a therapist, I watch people go through changes all the time. Some have been changes they chose and purposefully created. Others have been changes caused by trauma or loss that they had to trudge their way through, and somehow try to keep going.

Yet those changes are as inevitable as my grandparents’ clock ticking away.

I’ve let go of my old definition of motherhood. What has really helped has been not to view my empty nest — as loss. I view it instead as change. And I know I’m lucky. So many people have adult children whose choices are painful to watch, and often require a continuation of active helping, or at least trying to help. Drugs, alcohol, abusive relationships, or mental illness can be a huge factor at this age. It’s hard for those parents to know what to do.

So it’s definitely the end of a certain time, or a way of being together. But it’s not loss.

Loss is when something is gone. Forever.

The challenge for me, and probably many parents, is how to redefine yourself.  It’s not my responsibility anymore to check up on whether or not he got his teeth cleaned, or is he getting enough sleep, or is he going through something he needs to talk to someone about. He’s got all that.

Today, motherhood feels like waiting to be asked, or needed. Looking for small things I can offer, or do for fun, that would brighten his day. Giving out an occasional piece of advice.

Loving him as best I can, but staying out of the way.

I admittedly would love it if he weren’t in LA.  I would enjoy having him pop by after work or bring friends over for spaghetti and meatballs. I would like to see him enough where we might get on each other’s nerves, or have an occasional squabble. (Actually, that happens anyway, come to think of it.)

It looks, for now, that my mothering will be the long distance variety. That’s part of the redefinition. I’ll learn about the best way to send packages, or maybe I’ll take up SnapChat.

My mother used to say, “There are no boring things, only boring people.”

Maybe empty nest is the same.

“Empty nest is only empty if you settle for an empty life.”