Empty Nesting Season: Letting Go A Little At A Time 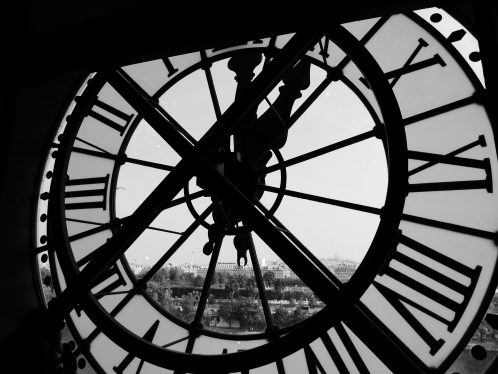 My grandparents had a gorgeous old grandfather clock in their den where my grandmother rocked and knitted while my grandfather read his paper. I loved the deep, resonate sound it made every second of every day.

That tangible reminder of time passing was as comforting as the very predictability of the ticks themselves.

Yet sometimes time passing, chapters of your life ending and transforming into a new normal, isn’t so comforting. I have a distinct memory of just such a moment.

My son was driving off to begin his second year of college. He’d been home only a brief couple of days during the summer and this year, didn’t need us to take him back to school, a ritual that I hadn’t anticipated giving up. He was taking his own car, and explained with a gentle smile, “Mom, there’ll be plenty of guys to help.”  I swallowed hard and smiled. So after tight hugs good-bye, his dad and I stood at the end of our driveway, waving while he drove away.

I could almost hear a “tick tock” in my head, as a tear rolled down my cheek. I looked up at his dad, who was wiping his eyes suspiciously as well.

Letting go a little at a time…

The next morning, I was back to my routine, rushing around and driving to work. I’d forgotten that the local schools were also starting a new year. And to my initial dismay — I was stuck in a long line of cars in front of an elementary school. Marching along the sidewalk was a colorful parade of entire families, celebrating going back to school.

The next morning, I was back to my routine, rushing around and driving to work. I’d forgotten that the local schools were also starting a new year. And to my initial dismay — I was stuck in a long line of cars in front of an elementary school. Marching along the sidewalk was a colorful parade of entire families, celebrating going back to school. 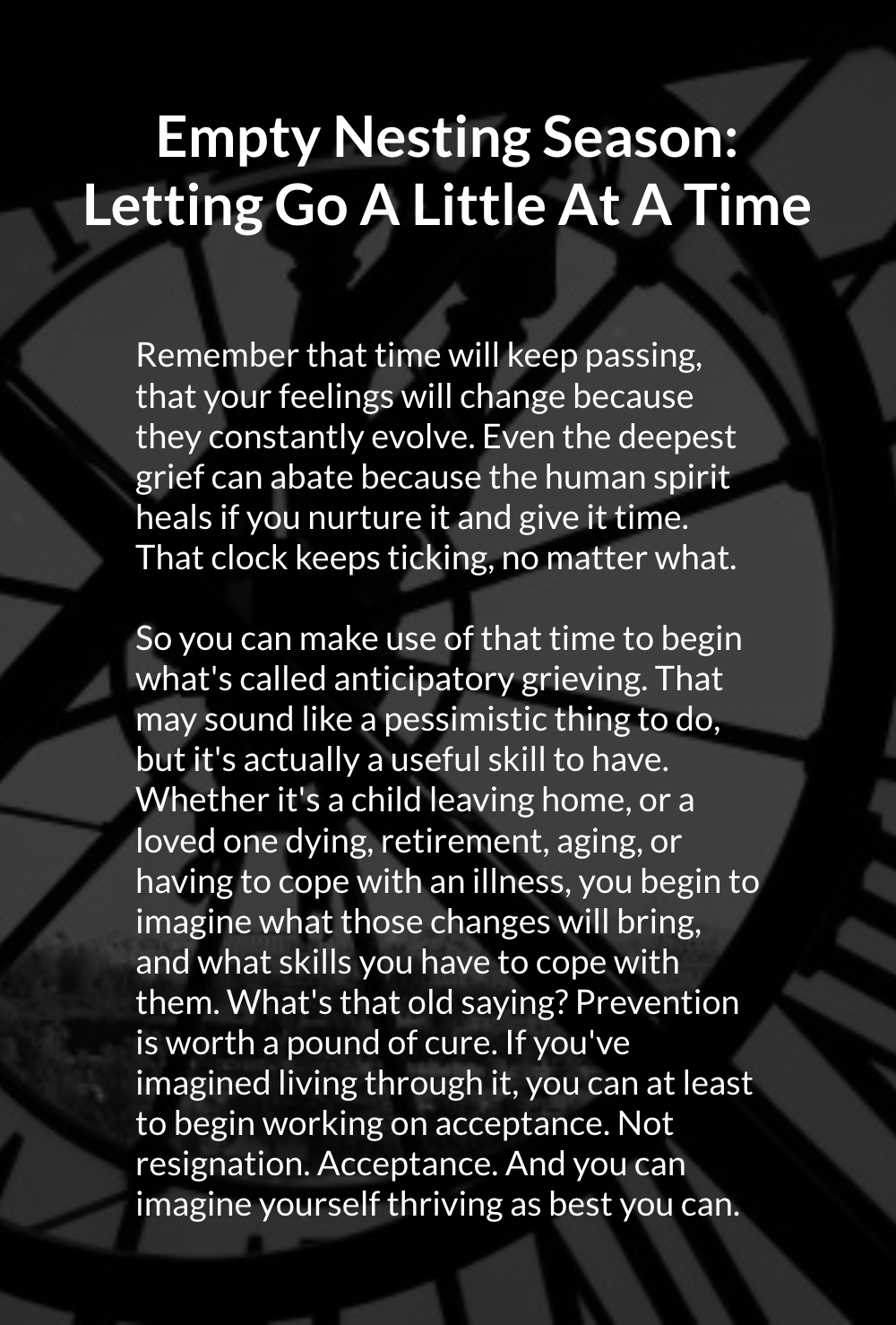 Dads were carrying tousled toddlers on their shoulders while moms were pushing baby carriages, and the family dog loped along, curious as to what was going on. Younger kids clasped the hands of their older brothers and sisters who were dressed in not-a-spot-on-’em-outfits with brightly-colored backpacks tightly fit onto their little bodies. Some children giggled and walked with a confident stride, others were staring down at their feet as if they were a bit overwhelmed.

There was the occasional fifth grader who was far too mature for all of this ceremony and walked a few feet ahead of their parents.  And I could only imagine that some of those very parents were dreading the walk back home, surreptitiously wiping away a tear or two, with the anticipation of leaving their newly minted Kindergartener in their first classroom.

It was almost too picturesque, but also poignant as my irritation at being stuck in traffic dropped away. At first, I was reminded at what a difference a few years make. But then, I realized how everything is really just the same. Just like me, these parents were loving their kids, watching them grow. Change. Mature. Transition. Pride, happiness, and satisfaction can all coexist with sadness as our children get older and and need us less and less.

Or as I like to think of it.. need us differently.

So how can you make letting go a little easier?

What is anticipatory grieving?

Remember that time will keep passing, that your feelings will change because they constantly evolve. Even the deepest grief can abate because the human spirit heals if you nurture it and give it time. That clock keeps ticking, no matter what.

So you can make use of that time to begin what’s called anticipatory grieving. That may sound like a pessimistic thing to do, but it’s actually a useful skill to have. Whether it’s a child leaving home, or a loved one dying, retirement, aging, or having to cope with an illness, you begin to imagine what those changes will bring, and what skills you have to cope with them. What’s that old saying? Prevention is worth a pound of cure. If you’ve imagined living through it, you can at least to begin working on acceptance. Not resignation. Acceptance. And you can imagine yourself thriving as best you can.

Then get back to the present. And relish what you’re enjoying and learning each day. Because tomorrow it will be behind you; the memories you create today might just be ones you look fondly upon tomorrow or even decades later.