My brothers Adam, Spencer, my Dad and me at Easter, circa 1960. And THE BONNET.

Our first Easter weekend without a child at home.  Somehow feels odd.  My husband said he didn’t even remember us having big Easter dinners, which of course we have had almost every year.  His parents over, the whole nine yards.  That’s a a little annoying actually but I guess that’s marriage.  Mutual annoyance at times.

I have lots of memories of Easters.  Many involve church and choir performances.  Mostly singing the “Hallelujah Chorus” from The Messiah, a very traditional piece to do at Easter.   When I sang soprano, I remember gearing up  for all those incredibly high notes and trying not to sound like some kind of screeching hawk.  Watching the tenors get red in the face as well, as they soared (or sputtered) into their higher range.  The composer, Handel, must not have cared for sopranos and tenors.  The last time I was with a church choir, I actually sang tenor instead of my now customary alto.  I could belt it out.  Two octaves down from two decades before.  That was actually fun.

Congregations seem to love the annual ritual of the Hallelujah Chorus.    Some churches with bigger music budgets spring for instrumentalists to join the choir, which lends uniqueness and beauty to the event, plus a few more performance jitters.    Afterwards,  there has always been  a sense of celebration and joy, of course about the incredible meaning of Easter day for those attending, but about the perceived Conquering Of The Chorus.  There may have been a few slip-ups; hopefully, no one messed up at the end when there is supposed to be a huge pause before the last “Hallelujah!!!”.  You have sung about forty “Hallelujahs!” in a row and you are supposed to stop suddenly.  Kinda like stopping a train in its tracks.  If so, you heard this one forceful “Ha…!”  and then noticed someone in the choir turning all shades of pink.  That’s pretty noticeable when that happens.

Then there were childhood Easters.  The picture above shows my Dad, brothers Adam on the left and Spencer on the right, and me in an Easter bonnet.  Guess I was about five or six.  I remember standing for that pose.  Dad had one of those cameras that he would set the shutter speed on a delay, then he would run and get in the picture.  It would snap the shot, with barely a second to spare.  Mother didn’t like her picture to be taken so I guess that’s why she was not in it.  Or it was before church and she had had her hands full getting us ready.

I told Spencer today his picture was going to be on my blog.  I asked him if he remembered that particular picture, as it had been on Mom’s dressing table for years.  He commented dryly, laughing, “No.  But I remember the bonnet. I didn’t know we were related to the Amish until I saw you wearing it”.  He should be writing this blog.

The bonnet definitely made a statement.  It was bigger than my head and very stiff so it would stand up tall.  The ribbon chafed my skin a little.  I don’t remember if the other little girls had on bonnets or not when I got to Sunday School.  I seriously doubt it.  That one sat on my head all day long.   Surely I felt ridiculous but I don’t remember.  The coat was baby blue and hand-made as was my entire Easter ensemble.    I still have a couple of the dresses my mother sewed, but not the bonnet.  Maybe it is in a bonnet museum somewhere.  Somehow I hope so for my mom’s sake.  She was a beautiful seamstress and obviously believed that little girls should wear bonnets.  This, despite the fact it was 1960 not 1860.

Of course when we had Rob, our son, we did Easter egg hunts in the front yard.  I hated those great big public egg hunts where a hundred or more kids would arrive.  The kids were fine.  But some of the moms or dads would rush around and “help” their kids find the eggs so that their little darling would have eighteen eggs and mine would have two.  Like it was a contest.  Try explaining that to a three year-old.  He just thinks he has a lousy mom.   Or the Easter Bunny hates him. 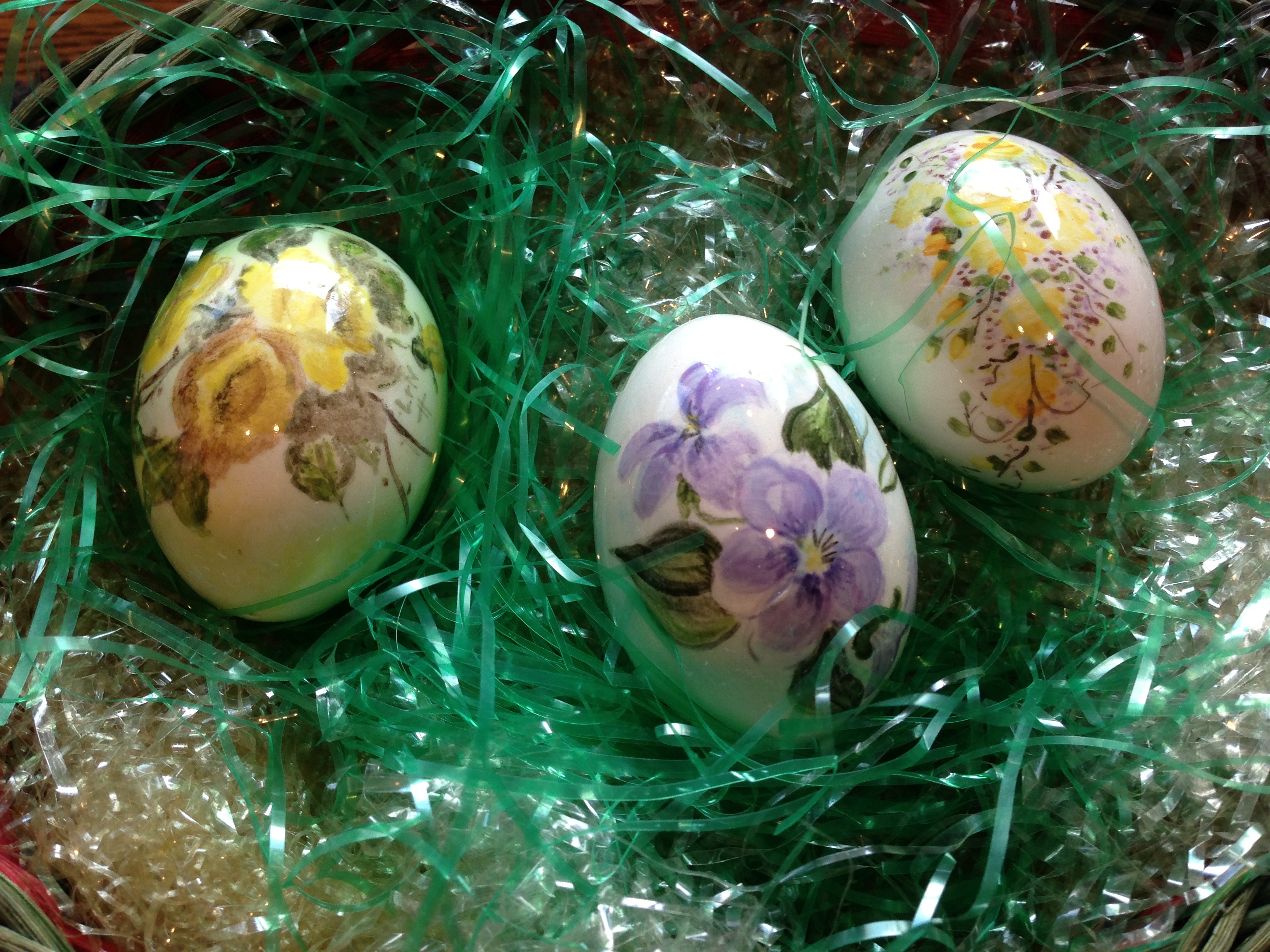 Hand-painted treasures from my mother-in-law. NOT to be hidden by any bunny.

So the yard was much better.  No competition.  I would put out the colorful eggs and usually a trail of clues to a small Easter present hidden somewhere.  That meant of course setting my alarm for 4:00 am and scrambling around in the dark, in sometimes wet or certainly dewy, grass.  With a flashlight, trying not to stub a toe or trip on some forgotten tree root sticking up somewhere.  Somehow my beloved husband managed to never help with that part.  Near the end of the hunt, he would ask me, “Has Rob found all the eggs?”.  My response was the same every year.  “I don’t know.  I didn’t count them”.  That’s when his OCD-ness would get the better of him and his annoyance would come to the fore.  Like I said, part of marriage.  You can imagine my answer.  Shall we say it in unison?  “Then do it yourself next year”.  Yes, I knew you would know.   We have probably all had that conversation in our relationships.

Obviously the egg thing has been over for a while.  I kinda miss the Easter ritual of my husband’s predictable irritation at my inevitable nonchalance of whether we were going to be finding plastic eggs in our yard in July.  It’s comforting that some things never change.

So this Easter will be different.  No son.  No eggs.  No singing the Hallelujah Chorus.  No bonnet thank goodness.  Am making homemade spaghetti and meatballs for just the two of us so no guests for dinner.  Although my meatballs are pretty darn good.  Make them with beef, pork and veal.  Yum.  And I just might whomp up the enthusiasm to make my own pasta.  I also may call Rob and see what he remembers about Easters.  That will make me feel better.  If he answers his phone.

Please in the spirit of the day e-mail or tweet this to someone you know whose parent might have stuck her or him in some kind of interesting Easter outfit!  Would love to get pics of others or one from you!