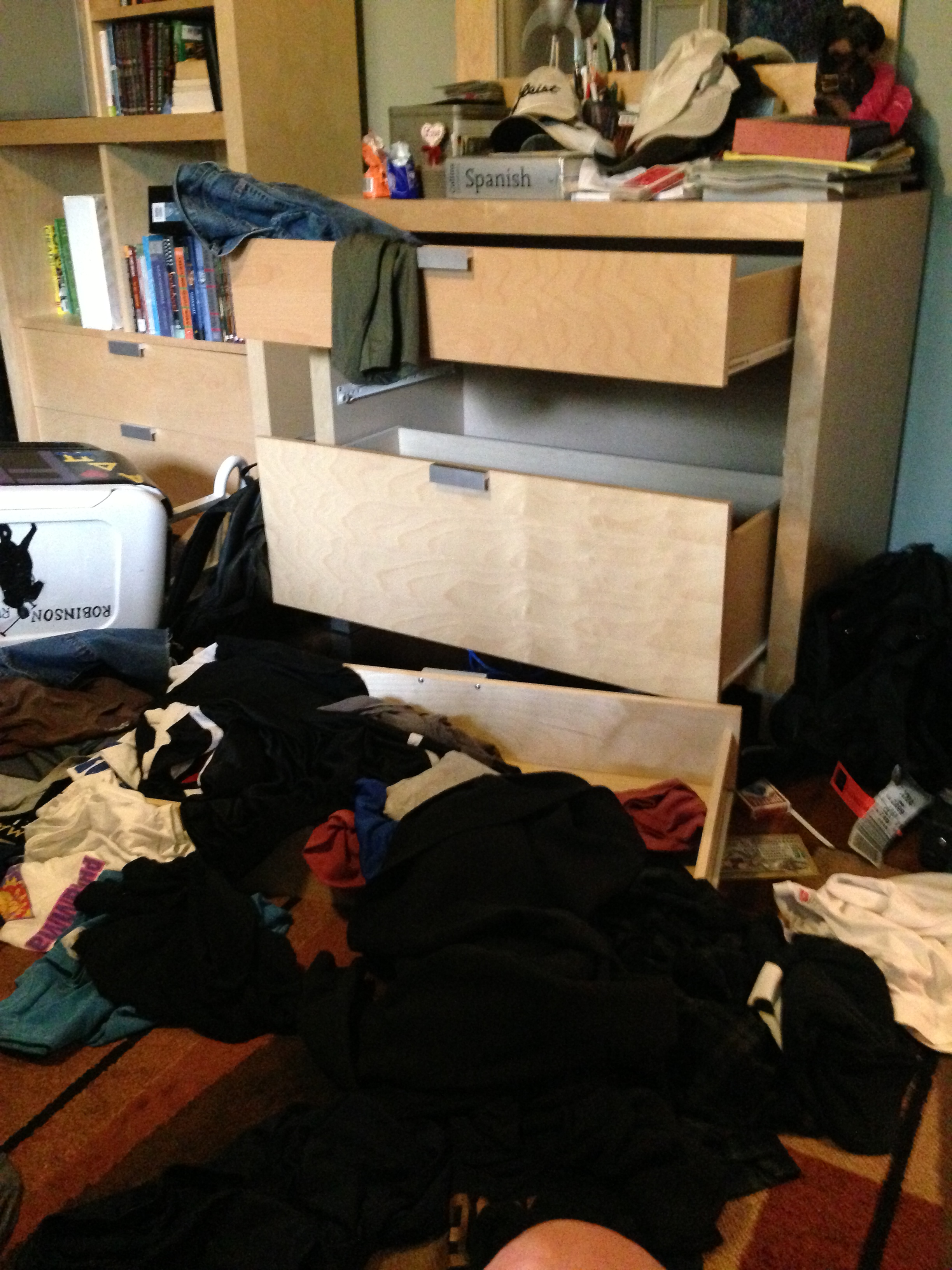 Rob’s room.  Drawer on floor. Perhaps will start a trend…  He only has about a foot to his bed.

My son Rob’s been home a month now and I am starting to hear the question, “So when does he got back to school?”.  Usually accompanied by the quick, “Bet you have loved having him home!”, and a sort of sad, halfway empathic look.  My answer is, “Oh I am just staying in the moment and doing my best not to think about it”, which is sort of true.  It’s really that I don’t want to talk about it with most people.  “We are just enjoying having him around”.   Although I write a blog, I am a private person.  How’s that for contradiction?  It’s about control I guess.  I will tell what I want to tell, when I want to tell it.

Still his stuff is around.  The den is again messy – guitars that I have to step over.  An empty milk container left out that I find the next morning that I put in the trash.  Okay, I know I am enabling his bad behavior.  Summer blankets strewn on the floor; shoes that I trip over because they are under the blankets.  Upstairs, I glance in his bedroom and there is a cabinet drawer on the floor in the middle of his room.  A drawer full of folded clothes, or clothes that used to be folded.  Why is there a drawer on the floor in the middle of the room?  Beats me.  He’s home.  It’s his room.  I just walk on by.

In a recent post on my Facebook blog account, I mentioned an article by Elizabeth Bernstein which got a lot of press.  It was an article on Empty Nest.  It cited an increase in divorces in older folks and somehow then linked that to Empty Nest, which frankly I thought was a little confusing.  Multiple meta-analyses of marital satisfaction research show an increase of marital contentment after kids leave, not dissatisfaction (Wow, that sentence sounds very psychological… If this were a scholarly kind of thing, I would be citing those articles for you, but I guess you are just going to have to take my word for it).  The fact that more divorces are occurring in that age bracket I would think is likely more related to other factors, perhaps people having more affairs, more dual career couples with less financial fear of divorce, something like that.  Obviously, being unhappy your children are gone might be a factor, but not quite so straight-forward as Ms. Bernstein might have led us to believe.  I agreed with other things she said in the article, although not many of us could afford to have two separate households as a solution to being unhappy in our marriages!  I never watched Sex and the City on TV; finally gave in to the craze and saw the movie.  As I recall, that’s what Big and Carrie did as well. Although it might benefit the housing market,  I think perhaps there are more simple and practical ideas.  Like laugh more.  Touch more.  Things like that.

Friday, I heard the Bernstein article being discussed on the TV show “Live with Kelly and Michael”, a show I listen to when I get ready in the morning and enjoy.    Here is the point I want to make.   Both Kelly and Michael have kids.  They talk about them all the time.  Both of them immediately jumped to the idea that “empty nest” would be NO problem for them.  Michael Strahan, who I guess has some kind of arrangement where he has children only part of the time, talked about how much he enjoys the time with his fiancé without children around, what fantastic adult time they have, etc.  Kelly Ripa announced that she was eagerly looking forward to life without kids, giggling about how her children joked with her about wanting to live with her when they were married.  Obviously a child’s fantasy kind of thing.

Okay, I get it.  These guys are on television.  They are there to make us laugh.  To entertain.  To go all sad on us and talk about how hard it will be to say good-bye to their children would not be good TV.

What bugs me a bit is that there was not even a sliver of acknowledgement that it might just be a little difficult.  Even in a joking way that in a forum like a morning show, the public could accept.  So that thousands of viewers’ realities could be affirmed – those watching that could be struggling that morning.  Guess that’s the difference between “Live with Kelly and Michael” and “Oprah”.

The word I would use for my experience is wrenching.  At times, not all times, it has felt either that something was being torn out of me or I was missing something that was so vital that I couldn’t stand it… but somehow I had to…  and I did.   And I still am.  It’s vital that I do.

But tonight, he is lying beside me.  I am in the chair; he is sprawled on the sofa.  We three just finished dinner; I fixed Cornish hen and rice  and he brought broccoli cheese soup from the restaurant.  Pretty good eats.  He asked for some of my dark meat because he likes it best.  He had played in a golf tournament for two days.  Lost both days, but had played much better today.  His dad and I had watched and we talked about it over dinner.  It’s quiet right now with his Dad cleaning up.  I adore times like this.  These are the times I miss most when he’s gone.  He’s reading an article about something, texting from time to time, and I’m writing.  TV on something none of us are watching.  Just hang time.  His friends are coming over in a little while.

This is the stuff Kelly and Michael are not even realizing yet.  They don’t yet understand the stuff that is going to feel empty.

There’s nobody to ask for your dark meat.