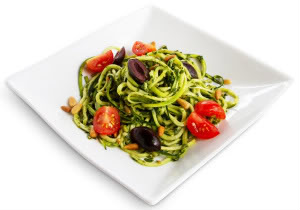 Pesto Pasta. I don’t make mine with olives or tomatoes but it’s a more colorful picture!

Last night we had pesto pasta with chicken.  Homemade of course.  It was Rob’s last night of an early spring break and it’s one of his favorites.  It was going to be a special meal.   At this time of year, it’s hard to find basil in the store so I had to go to both the local Harp’s Grocery and Walmart Neighborhood Market to find enough.  In the rain.  Didn’t matter.  It was for Rob.  He had been home for a week and it had been an outstanding visit.

Sadly enough, his trip with his friends to Florida had fallen through.  He traveled to New Orleans for a long weekend, had some good times there, and then came home.  My excitement surprised me a little; I thought I was beginning to get accustomed to all of this.  But there I was again at the airport, not waiting down on the first floor, but riding the escalator up to the gate level and peeking around to see him the very first minute possible as he rounded the corner.

I had felt a tiny bit of awkwardness at first as we eased back into each others’ lives.  But then it all just started flowing again.  Fried chicken and Italian meatballs were consumed, with discussions about culinary technique a part of dinner.  Jokes and mostly gentle sarcasm swirled about, all familiar and cozy.  Had time to talk more in depth about school, his friends, his plans.  Actually felt as if I could get things a little straighter in my head.  He was supportive and interested in what his Dad and I were doing here.

The pesto was awesome.  I think it tasted good for three reasons.  I added fresh lemon like Giada from Food Network had suggested in a recent show.  That is a keeper.  Second, the company.  Third, the fact that it was my last meal for maybe thirty-six hours.   Yeah today is going to be a real humdinger.  Rob left this morning and I am preparing for a colonoscopy tomorrow.  Just a standard one.  Boy oh boy oh boy.    The fridge is full of Jello, Gatorade and juice.  Yuck.  That’s what you eat when you’re sick.  Can’t have one potato chip to help me with this most recent sayonara.  Tears at the airport.  The price perhaps for the outstanding time.

But back to yesterday. I had bought all the basil Walmart had to offer and was paying at the cash register when I noticed an older gentleman trying to push his cart slowly through the maze of carts near the door.  His wife, whose face was quite horribly bruised, was somewhat angrily calling to him, things like “Hurry up!”.  His right foot was dragging a bit and he couldn’t walk fast.  He couldn’t steer the cart well at all.  Kept running into things.  His wife grew more impatient.  I hurried over, smiled and just steadied his cart a bit.  His wife didn’t see me at first.  I then offered help with crossing the street and she accepted.  When I helped him into the car, I reached out to shake his hand.  Instead he gave me a hug and his eyes gleamed as if he knew me.  That’s when I realized he might have Alzheimer’s.

I asked the wife about her face.  She said she had taken a nasty fall.  “That must have been terrifying”, was my response.  She softened.  She then told me about the disease.  I had been right, it was Alzheimer’s.  “You know, (Jim) and I have been married 63 years.  We have traveled all over the world and we have done things together that many people did not get to do.  We were so blessed.  I try to get him out.  But I think this is our last trip to the store”.

I had made an assumption about that woman.  People are just more complicated than we know.  Sometimes you are not catching them at their best moment.

I am not an expert in being a caregiver to those with chronically debilitating illnesses.  It must be extraordinarily difficult.  The few I have seen as patients do tell me that they get angry when they wish they wouldn’t.  I am just glad I got to know more of who that woman really was and not what my assumption, which was fairly negative, was leading me to believe.

How in the heck does all this tie together?  And why in an essay about NestAche do I tell another story about a grocery store?  The importance of assumptions.  To always check out where your mind is going; to not believe you really know the truth or the whole story.  When we had gone to see Rob a few weeks ago at college, it had been difficult.  I had felt lost and insecure about our relationship.  If I had let that experience overly define my stance toward him this week, I don’t think I would have been as open.  I would have already been assuming he didn’t want me around anymore.  Already have wrapped myself up in feelings of rejection or abandonment.  It almost slipped up on me one day.   We were going to meet each other for lunch and he didn’t return a text.   Told myself, “He must still be sleeping and doesn’t care”.  Then I immediately stopped and caught the assumption.  Silly, silly.  He texted me ten minutes later. 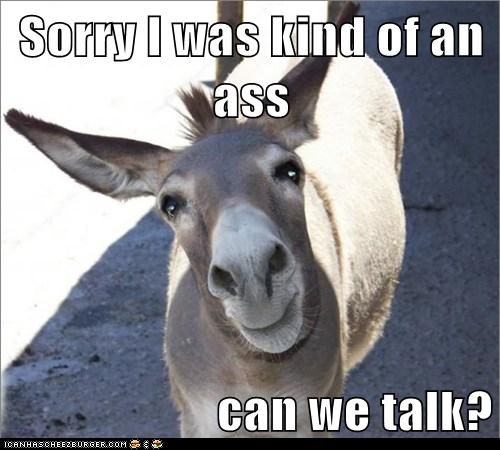 I should have sent this to my friend… but we have talked and all is well.

There was much more information about the woman at the store than my first assumption reflected.  There was more information about me than my friend’s first justifiable reaction suggested.  We can assume all we like but there is often so much more to the story.  I am trying to grow ever more comfortable with deciding I don’t know, and there is more to know.  Trying not to assume.

The old “assuming just makes an ass out of u and me”.  Pretty true I guess.  Well, donkey-dom is not for me.

And of course, I have my colonoscopy to look forward to.  Another joy of becoming older.  Guess I should not assume it is going to be awful.  I had one about five years ago and after the prep, the actual procedure is a breeze.  So think of me, or actually, don’t think of me tonight and tomorrow!!!