Anger. Is It Respected, Avoided, or Abusive In Your Life? 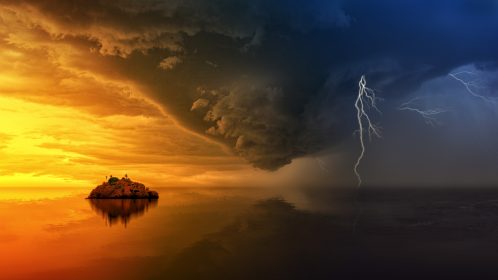 Anger. There’s a lot of it out there.

My office is on a narrow one-way street that isn’t well marked as such. A while back there was a big cement truck traveling the wrong way; it pulled over to let me by and I gestured, smiling, that this was a one-way street. The guy screamed, “F—- you!” as I drove by.

Hmm. As I said, a lot of anger is out there. What makes one person react so angrily to that type of a situation and the next person remains unfazed?

It starts in childhood; you first learn about anger in the family you grow up in. You watch and listen to the adults around you who, perhaps without realizing it, model how and when to express it. Depending upon your family’s dynamics, you might have learned that anger can be respected, that it can be avoided, it can be abusive, it can be discussed, it can be scary, or it can be understood as a natural part of the human experience.

When you respect, listen to, and appropriately express your anger…

Sometimes anger is really irritability. It’s about being in a bad mood, or waking up on the wrong side of the bed and hopefully, you can recognize that before you do or say something you’ll regret.

Yet often anger is more important than a passing mood. It’s about your core identity; it’s about who you are and what you care about. It speaks to your personal boundaries and your ability to maintain them.

Someone tells a demeaning joke, and you feel your skin crawl. Someone speeds through a stoplight, barely missing a child, and you get angry. That’s a sign that a boundary has been crossed for you; something important to you has been threatened, disregarded, or mocked. So you get mad, but what you do with that anger depends on what you were taught.

Anger isn’t violent in and of itself. The power of anger can be respected, and voiced respectfully. You may have to wait until you’re not quite so mad and when your words can be calm, of course; that is part of successfully navigating the intense emotion.

Instead of racing after the offending car, you can call the police and give a description. Rather than punching someone in the face, you can tell them you don’t like what they’ve said. You could choose not to curse loudly at some stranger who has irritated you, and instead wonder why you were affected so strongly by their actions.

A more difficult scenario is when someone’s anger is focused on you, particularly when it’s a close relationship and you’re struggling with an issue or having a disagreement. It’s hard not to get defensive when they’re lashing out angrily, and instead to listen. However, doing so can be an opportunity to learn and potentially your partnership can become stronger. Moreover, talking about that anger can even help you build empathy, ”I didn’t know that would make you mad… can you tell me more about it?”

When you avoid being angry at all costs…

How many of you can say, “I never heard my parents fight?”

Perhaps they strongly believed that conflict shouldn’t be handled in front of the kids, and did a really good job with keeping those kinds of conversations private. It’s not that they didn’t disagree, they simply didn’t spill their differences in front of the kids.

But from this you potentially learned to avoid conflict. It was something you never experienced, and you may even consider anger to automatically be scary and always irreconcilable. 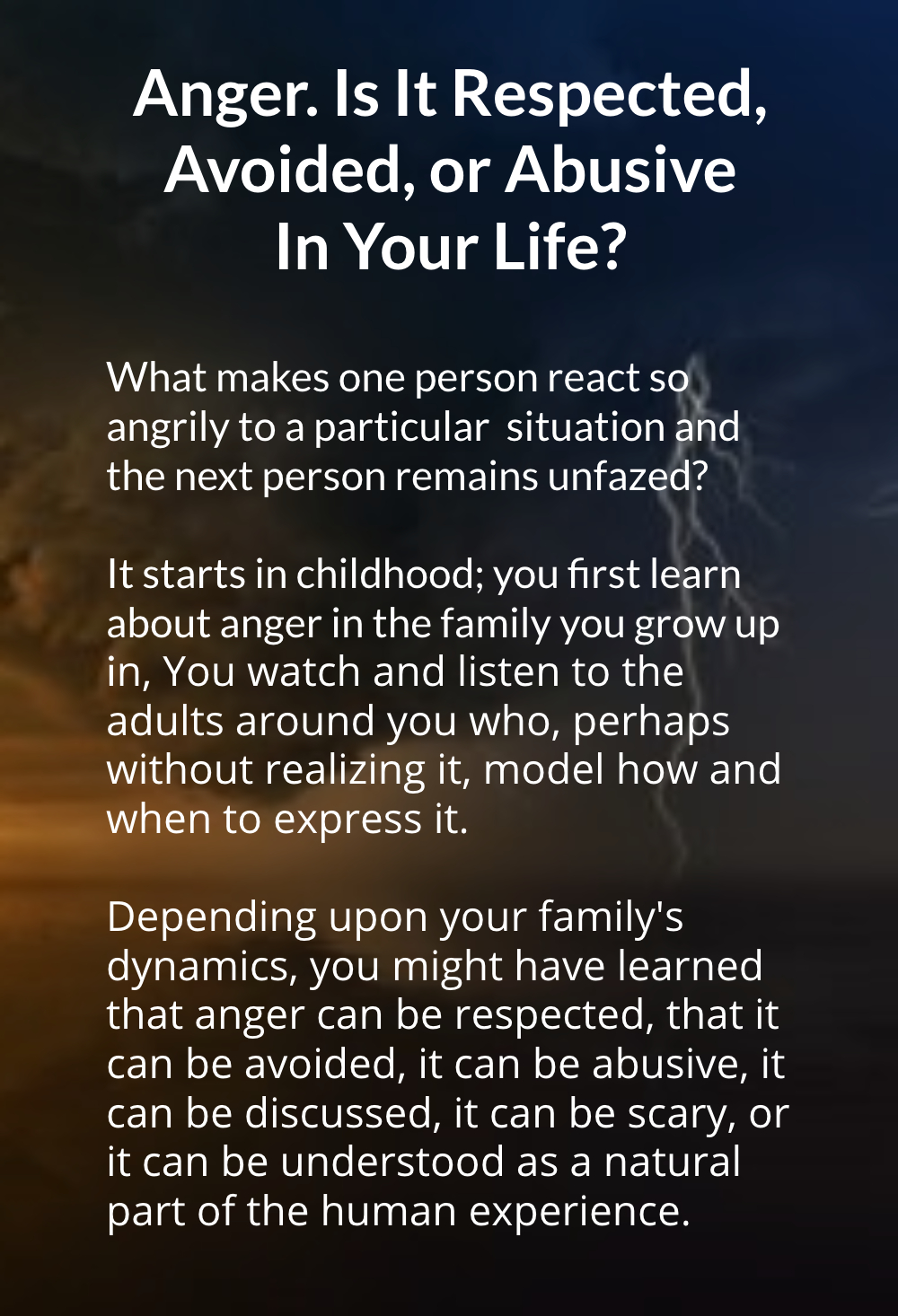 As a result, you may actively deny problems. Maybe you and your partner haven’t touched each other in years but haven’t ever spoken of it. Or you never talk about the credit card debt that hangs over your heads, or silently watch as your partner gets drunk every night. But you never argue, and you think that’s healthy.

“I don’t think it would change anything.”

Really? It’s hard work, true. But so worth it.

Anger that’s avoided can lead to tremendous resentment and blind insensitivity. One partner may eventually have had it, totally withdraw, justify having an affair or file for divorce. Yet the other may never have recognized the extent of the emotional damage.

If you grew up in an avoidant family you can learn to voice your identity or your opinion, believe in your own worth, and express that opinion appropriately. These skills can be learned at any age.

These are families where anger is used to control and manipulate. There is no safety nor security, and atrocious acts of violence and manipulation can happen in a vicious cycle. So maybe you tried to protect yourself as best you could.

“I knew better than to make Mom mad.”

“When we’d hear Dad’s car in the driveway, we’d all run to our rooms.”

“When we’d hear the whiskey bottle open, we knew it was coming.”

You could’ve been so dominated by the abuser that to disagree would only lead to further torment. You learned not to rock the boat, or your own private hell would begin all over again. And the confusing thing? Many times it did anyway, no matter what you said or did, or didn’t do or say.

As a child growing up in these families, you can become very angry. There is no safe outlet for emotions. In an attempt to deal with that anger, you might ultimately become an abuser yourself, you might try to fight back (which can be dangerous), you might become invisible, or you might try to escape in some other ways such as substance abuse, an eating disorder, obsessive athleticism — anything to escape from your real world.

You don’t have to be governed by what you experienced in an abusive family. It’s important that you work through that trauma so that you aren’t continuing the coping skills you adopted as a child. With time and patience, what you experienced can be worked through; it’s finally safe to have your own identity.

And you can learn that all of your feelings, including anger, can be respected.