A Little Gratitude Feeds A Marriage: Three Steps to Take If You Feel Taken for Granted. 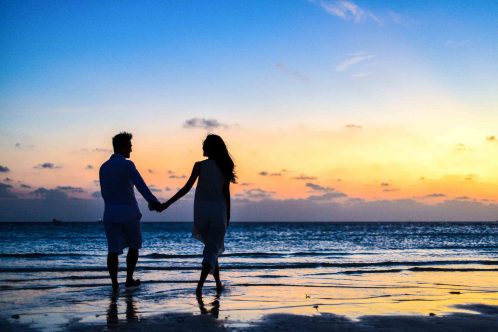 Being taken for granted is lonely and it’s very easy to become resentful.

And it happens a lot when you’ve been together for a long time, married or not. If you do a task well, you’re usually the one whose primary responsibility it becomes to complete that chore. It just makes sense to structure a household in this way.

If you’re a good cook, you plan dinner. if you’re a better money manager, then that becomes your job.

But we all get very tired of doing the same thing over and over and a hearing a little gratitude goes a long way. So making a point to thank your partner for wiping down the kitchen counters or taking out the garbage (once again…) can make a big difference in a marriage or any relationship, for that matter.

I hear myself say this, but I have to remind myself all the time.

My husband has a lot more patience than I do, so he does a lot of the things around the house that require that particular virtue. I rush around, multi-tasking most of the time, checking things off my to-do list.

He fills up the little pump thing to the left of the kitchen faucet that holds dishwashing liquid. He unravels my earrings or necklaces when they are all balled up (because I haven’t put them away neatly). He folds our clothes with great patience, which I appreciate because I also don’t care for ironing.

The other day, I was rushing to get to the office and grabbed tuna fish out of the fridge; I looked in the place we keep our plastic grocery bags to use one to carry my lunch. Miraculously, the sack was not stuffed to the brim with bags, which was a welcome sight. Someone had remembered to take the overflow to be recycled.

Someone who’s not always in a hurry.

That particular someone happened to be standing in the kitchen as I plopped the tuna into the sack, so I took this as an opportunity to follow my own advice. ”You know…I do notice all the things you do around here. All the little things. Thanks for taking those bags to be recycled.”

He smiled, that little twinkle in his eyes telling me that I was welcome. But with just enough of a, “Well, finally you said something,” to put me in my place. And remind me that perhaps I should offer gratitude a bit more often.

When I talk about the importance of this kind of communication with patients, I usually hear some moans and groans, “Do I have to thank him every single time he loads the dishwasher? I cook. He’s supposed to clean up. It’s just how things go.”

Or, “We’ve all gotten so politically correct. That woman who writes about cleaning up your house wants us to “thank” our clothes before we give them away, for Pete’s sake.”

No, of course you don’t have to thank your partner every time they do something around the house; that would be a bit silly.

But I wonder if you’ve ever asked your partner if they know you’re grateful for what they do? Or even things about their very being that bring you a sense of gratitude?

Being taken for granted…

Basically, if you feel taken for granted, you feel that someone is underestimating your value or that you’ll always how up, you’ll always do this or that for them, or you don’t need to be thanked because you’re expected to be a certain way. In a very roundabout way, it can be viewed as a compliment. You’re known for things like being prompt, or being highly organized, or always providing a great meal. But… that can get very old when those expectations aren’t reciprocated in some way, or your efforts aren’t recognized. 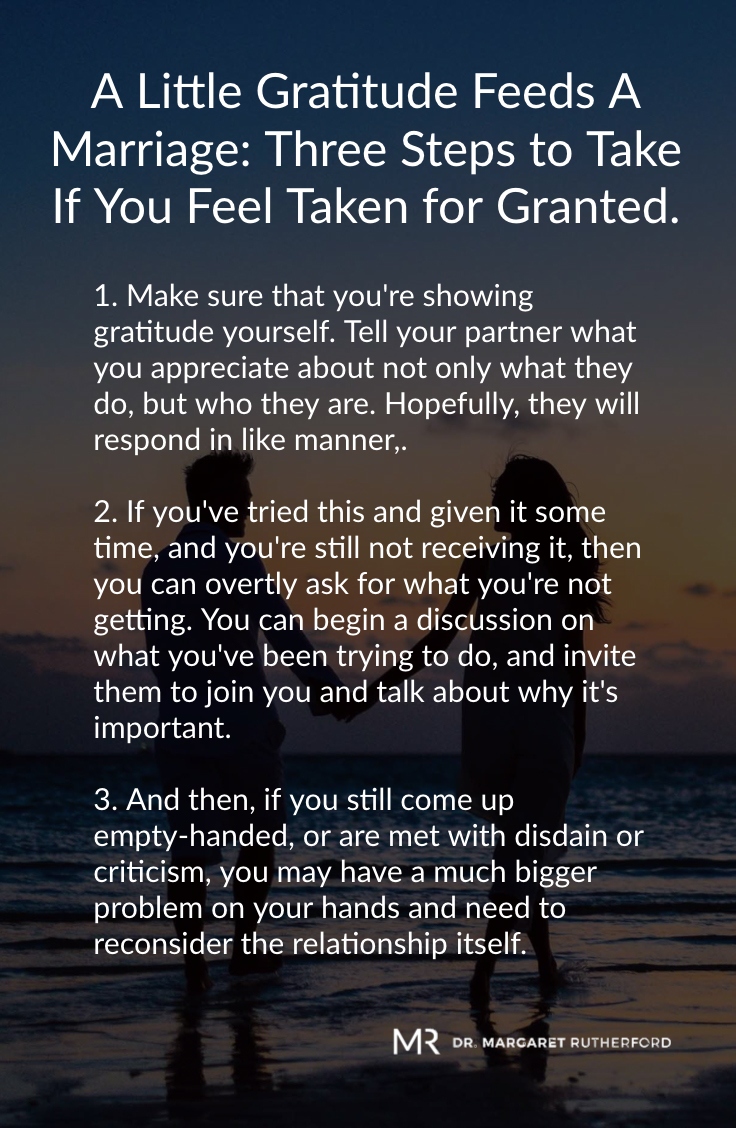 I heard a story on the radio many years ago. It was told by a female narrator, Jane, who had a somewhat raspy  (like some older voices can become), but very melodious slow Southern drawl. It was like listening to a gentle wind in the midst of a grove of pine trees.

Her ensuing story was funny. Every Wednesday night at her church, there was a potluck — one of those meals where you eat things you never eat “normally,” making sure to say that quite loudly, and secretly hope that Mrs. Smith brings her brownies. Jane’s specialty was her grandmother’s potato salad recipe that had been passed down for generations. So she whipped some up every Wednesday, without fail — even though the recipe took hours of peeling, dicing, and mixing.

That next Wednesday, Jane arrived, potato salad in hand. She was a bit early so could notice more clearly what others had brought. And what did she “finally” see? Joseph brought a tray of sandwich meat. Kathleen, a cheese tray. Mary and Jesse brought a pie from a local bakeshop. No one said a special thanks to Jane, or made note of her painstaking work.

And that wasn’t good. Because it was at that moment Jane decided to only make her potato salad in much smaller batches — and only for people who were much more appreciative of her efforts.

The church potluck would never be the same. But Jane had stood up for herself.

What do you do to avoid being taken for granted…

I worked once with someone who’d gone through difficult infertility treatments in order to have her son. It was obviously not the responsibility of the child, now a teenager, to understand and appreciate the magnitude of his mother’s experience and sacrifice. He was much more grateful for the hamburger she just fed him.

She was trying to find validation from her child- a validation he couldn’t offer; you have to watch trying to get your “gratitude” quotient from your kids. Children are often like black holes of need and it takes them years to realize your gifts to them. Many times, they’re going through some stage in their own lives where they can’t even comprehend their impact on you.

However, if your kids hear their two parents thank one another, or overtly and frequently recognize that parent’s value, then they will eventually catch on. It’s a great skill to give your kids — to show kindness and gratitude.

Some people do what Jane did — and stop doing the thing that they feel others take for granted. And sometimes that can work. A mom or dad who stops doing everyone’s laundry. Or takes a vacation from doing the dishes. But this can also backfire — and lead everyone to say, “Oh okay, if you get to quit, then I get to quit.” And it can become a battle.

Here are three steps that I recommend:

Gratitude is the food that nourishes each relationship. And it’s needed for both individuals and the relationship to thrive.

You can now listen to Dr. Margaret as she talks about relationships and many other topics on her new podcast, SelfWork with Dr. Margaret Rutherford. Click here!

You can also subscribe to her website, and join the over 4000 readers who enjoy receiving her weekly posts via email! For joining, you’ll receive a free copy of her ebook, “Seven Commandments of Good Therapy,” a guide to evaluating a therapist.