Breaking The Habit of Being Critical: Four Ways To Show Kindness to Your Partner

Your words greatly contribute to shaping your reality, and the health of your relationship is no exception.

“I can’t believe I ever married you.”

These words may be said in jest, a heated moment, or perhaps they’ve been uttered repeatedly in exasperation. Maybe they’re meant to hurt or grab emotional control of the situation. Regardless, these are words that you can’t take back and sadly they can have a cumulative effect. They can spark the realization that your relationship could end even if that’s not their original intent, and could ultimately shape that potential into reality.

Of course, if you do mean them sincerely, perhaps it’s time to consider therapy, either singly or as a couple. And if there is abuse in your relationship or your children are being harmed, then plan carefully, and leave safely.

If you don’t mean these sentiments and yet you still say (or hear) them a lot, they’re only adding to the emotional chaos of your world.

What happens when you feel threatened?

So, what do you usually do when you’re threatened?

You might get strongly defensive, often mounting a counter attack. “Well just go on and get it over with.”  Or if you don’t attack back, you may try to avoid more conflict or sweep those statements under the run.

Neither reaction is good for the relationship.

When a couple comes in for a first session, the hour can be loaded with “he saids” and “she saids.” No one is taking responsibility for their part of the problem, secretly (or not so secretly) wanting me to fix the other. The room is filled with disdain, often leaving very little time for treatment. It’s like trying to stop a train racing along a downhill track. After an hour of bickering and blaming, I’m asked, “So what do we do until we see you again?“

I give a couple of ideas, but then my final suggestion is, “Try to be kind to each other.” They usually look a bit perplexed, but say okay.

Kindness is essential. Kindness is the building block of empathy and understanding. Making kindness towards your partner a priority helps you suppress an impulse to voice contempt, which is critical to maintaining a healthy relationship.

Let’s take Nan and John. They had two children under the age of 3, both had busy careers, and had had trust problems even before children. Nan felt as if she did the lion’s share of work around the home; John didn’t feel appreciated for what he did. (This is an extremely common theme in marital work.)  Add two toddlers to that, and they were at each other’s throats, criticizing every diaper changed, every choice scrutinized to see how the other was living up to the role of “parent.” More and more distance was being created between them.

Therapy was limping along, until I gave them an assignment.

They both agreed to only make a comment about the other’s choices, if they were first given permission to do so. For example, “Would you like my opinion on what you dressed Melissa in today?” Or, “Can I offer a suggestion on how you might get Taylor to take a bath?”

The next week, they came in laughing. There were a few times that permission had been given and a suggestion made. But most of the time, the editorial comment was flatly refused. They each looked at me and said, “You know, their way of doing things could be just as good. Or even if it wasn’t, it wasn’t a big deal. Mary still got dressed and Taylor either got a bath or he didn’t.“  But what was so life-changing? The relief from not arguing was so immense that it was worth shutting up, and letting the other do things their way. .

They continued the practice and got along much better, rediscovering the respect they had for one another, their shared sense of humor, and their affection for one another. 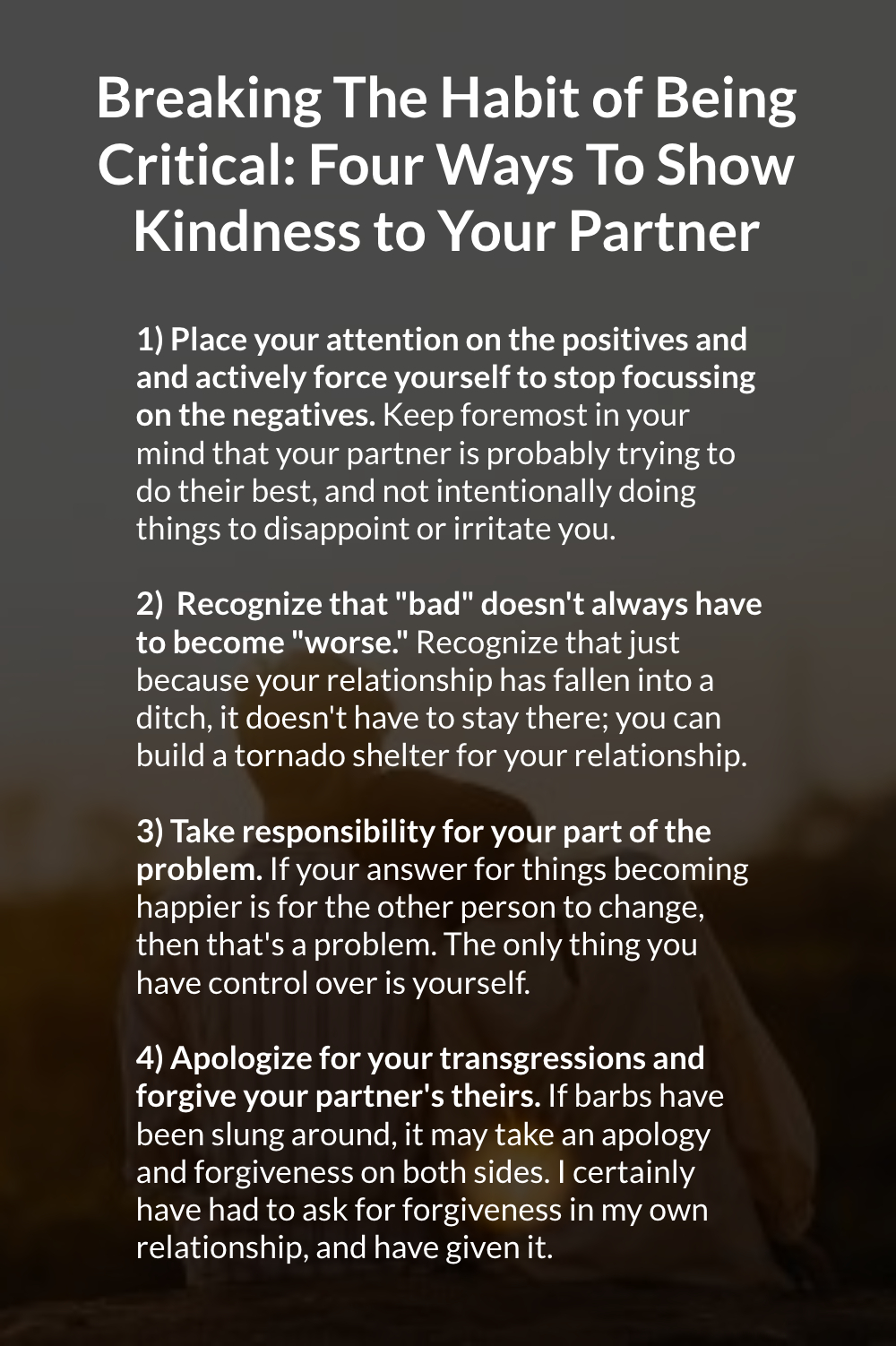 What else can you and/or your partner do if you’re in the habit of being critical?

1) Place your attention on the positives and and actively force yourself to stop focussing on the negatives.

Keep foremost in your mind that your partner is probably trying to do their best, and not intentionally doing things to disappoint or irritate you. Remember what you love about the person, and stop tearing them down at every opportunity. Habits can be hard to change, but it’s do-able.

2)  Recognize that “bad” doesn’t always have to become “worse.”

3) Take responsibility for your part of the problem.

If your answer for things becoming happier is for the other person to change, then that’s a problem. The only thing you have control over is yourself. Take a risk, and try tweaking your own behavior. Hopefully, your partner will respond.

4) Apologize for your transgressions and forgive your partner’s theirs.

If barbs have been slung around, it may take an apology and forgiveness on both sides. Nan and John could’ve “stayed mad” but instead they laughed and apologized.. I certainly have had to ask for forgiveness in my own relationship, and have given it.

You can now listen to Dr. Margaret as she talks about Perfectly Hidden Depression and many other topics on her new podcast, SelfWork with Dr. Margaret Rutherford. Click here!

You can also subscribe to her website, and join the over 4000 readers who enjoy receiving her weekly posts via email! For joining, you’ll receive a free copy of her ebook, “Seven Commandments of Good Therapy,” a guide to evaluating a therapist.