11 Ways To Help Your Child With Your Divorce 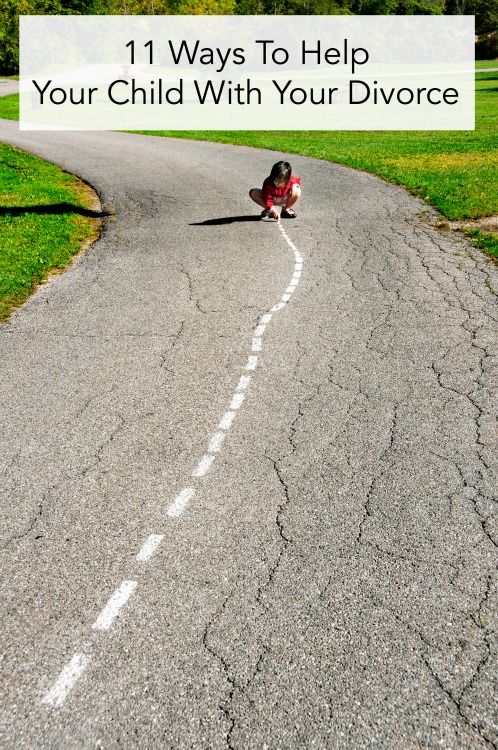 They both hurt. They both feel like failure, or should. But it’s very difficult to watch your children try to handle the split.

They often look and sound like they’re okay. At first. They want to know if Santa Claus will come to Mommy’s house too, or will both parents be at their birthday party.

How children fare depends on the maturity and sensitivity of the parents — how much they are working on getting emotionally, as well as legally divorced. Each individual child is going to handle it differently as well, dependent on their personality and other factors.

Current wisdom is the younger the better, yet other aspects, like how you treat each other in front of the the kids, can be just as vital. A very young child can still be sensitive to rage and harsh emotion.

2) Their own personalities, especially how sensitive to change they are, is a factor.

I think some parents carry this a little far. It’s good, if you can do it, to have some celebrations together, like you did when you were married. But at some point, for everyone’s sake and for the sake of clarity, the fact that two families exist where there was one has to be faced. It can be two families that get along very well. But it’s still two families.

If you have a child who likes order, things happening in a way that is predictable, it will take time for him to adjust, and learn a new normal.

3) How close they are to each parent can be extremely important to respect.

If a child has spent a lot of time with her dad or mom, and then that’s taken away, it can be very hard on her. Joint custody is much more the norm in our society, as culturally, men have become more involved in day to day parenting. It’s often one week with one parent, and one week with the other. That can be devastatingly difficult for a child that has a special bond with one parent.

Especially early on, parents need to be sensitive to this. What a judge orders is the guideline if the parents can’t agree. One of your children may need more time to adjust to being away from Mom or Dad.

4) A move to another school, thus losing their friends and support group, makes it more difficult.

Many parents try hard for this not to happen. As little change in the rest of their lives as possible for a while is a good thing. It gives them more stability.

5) If the child has felt unsafe, then there may be relief, especially initially.

If one parent has been a raging drunk or violent, getting away from them will feel much better.  It may be the relationship is severed due to abuse. With time, however, the child may miss that parent.

Children can be forever hopeful that a parent will finally be a good parent.

Careful decisions can be made about how visitation can occur, in instances like this.

6) Using a child as a pawn or a trophy to hurt the other parent ends hurting the child.

This occurs mainly when one child chooses to move away from his siblings, and live with the other parent.  That child is then showered with gifts or great trips. The other children feel abandoned and left out. This can set the kids against one another. It’s a continued emotional battle between the parents that is falling out on the children.

7) If one parent has primary custody, due to alcoholism or drug abuse of the other, often one child will feel a loyalty to the parent who is “alone.”

That can sometimes cause lots of anger with the primary parent who, from the child’s point of view, won’t “let” that child be with the other parent, causing a lot of fighting.

This dynamic can also happen when there isn’t drug abuse, or some other significant problem, but a parent simply doesn’t have custody. It’s usually the oldest or the youngest child who feels sorry for the parent, and will voice wanting to live with them, or at least, stay with them more often. It can take time and cooperation between the two parents to work this out.

8) Parents can hate one another so much that they remain aloof, using their children as messengers.

This causes extreme stress on the children. With little to no communication between the adults, frequently the children will have one parent they favor, and turn against the other, basically adopting the continued warfare mentality of the adults involved. No one ever “gets over” the divorce in these situations. The children are living two completely separate lives.

The parents need to let go of the battle, and communicate. 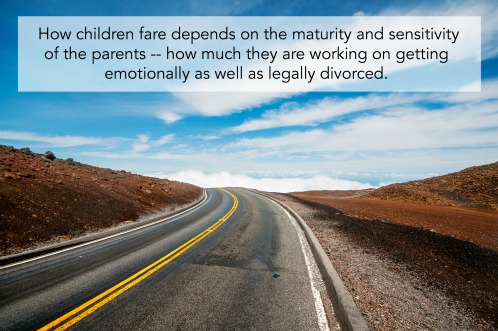 9) If a parent receives primary custody after a fight for it, and lords it over the other, the child may ultimately suffer.

Some parents don’t fight about custody at all. Some agree on joint. Others do fight, which means someone loses that battle. For years, men have been handling “not having custody of the kids,” and have had to cope with “disenfranchisement.” or a sense of being cut off from the basic rights of parenting.  More women are having to cope with these same feelings, as judges aren’t awarding automatic custody to moms.

So how does that disenfranchisement affect kids? The noncustodial parent can become depressed, ashamed or angry. It can cause feelings of wanting to not even see the kids, to escape the pain. You have to fight the hurt of that, and stay involved, if you want to be a good parent.

If you have primary custody, and the other parent is stable, being as giving with time as possible will help your child. It’s good to talk with your ex, as well, about important decisions.

10) When one or both parents blame the other for the divorce, it’s hard for the kids.

Kids want to love both their parents. You may have gotten divorced from your ex, but your children will likely have a relationship with them for the rest of their lives. Painting them as a bad person only puts your child in a defensive stance, or to please you, they might ally themselves with you and miss out on whatever good relationship they could have with your ex.

11) If one parent abandons the child or children, it’s devastating.

How many times have I heard and seen the hurt still present in an adult’s eyes, from remembering when they were waiting for Mom or Dad to show up for “their weekend,” and it never happened?

That hurt entrenches itself. The child’s self-worth and sense of security plummets.

The best way you can help your child? Get emotionally divorced yourself. Quit fighting the same battles you fought within your marriage. Focus on what is best for your children.

And try to be the best parent and parenting partner you can be.

If you want to get some help with emotional divorce, click here! It takes time.