100 Midwives Helping Give Birth To An Identity 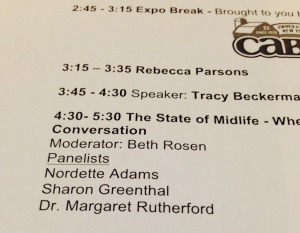 The only two births I have been intimately involved in were my own. And my son’s.

Until perhaps the first weekend in March.

It was a first conference. A promised place for learning. A chance for meeting those admired but as of yet unknown. An opportunity for a group’s identity to solidify and strengthen itself from within.

The very creators were enigmatic of the group itself. Four women who had never been all together in the same room with one another before that weekend. But with a mindset and a vision. Sharon Greenthal. Anne Parris. Beth Rosen. Teresa Kindred.

Many kudos to them. The Ob-Gyns in charge.

Labor pains began early, as Mother Nature would not allow some participants and speakers to get to the usually safe early spring hills of Nashville, Tennessee, randomly swamped with snow and ice. As was a lot of the country.

The rest of us managed to be there. And did all we could to coax that baby of a conference out of its womb.

It will be interesting to see and be a part of the continued infancy of this group. And by damned, I will hang on to my midlife attitude so that I can keep up with this baby who will soon learn to walk and run and jump!